'He Plumbed the Depths of Mysteries'—St John Chrysostom 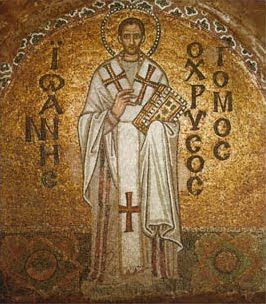 Today, 13 November on the Church’s calendar, we celebrate the memory of St John Chrysostom, ‘the Golden-tongued’ (347-407), Patriarch of Constantinople. According to Fr John McGuckin, ‘both as liturgical doctor and as preacher [St] John has become one of the central patristic authorities’ (The SCM Press A-Z of Patristic Theology [London: SCM, 2005], p. 191). Fr Georges Florovsky rightly observes (The Eastern Fathers of the Fourth Century, trans. Catherine Edmunds, Vol. 7 in The Collected Works of Georges Florovsky [Vaduz: Büchervertriebsanstalt, 1987, p. 240):

He was an ascetic and a martyr. It was not in the desert that his feats were accomplished but in the chaos of the world, in the pulpit of the preacher, and on the Episcopal throne. His martyrdom was bloodless. He was tormented not by external enemies but by his brothers who proved false to him, and he ended his life in chains, in exile, under interdiction, and persecuted by Christians for his faith in Christ and the Gospel, which he preached as a revelation and the law of life.

He was born in Antioch in the year 347, his father’s name being Secundus and his mother’s Anthusa. Studying Greek philosophy, John became disgusted with Hellenic paganism and turned to the Christian faith as the one and all-embracing truth. John was baptized by Meletius, Patriarch of Antioch, and, after that, his parents were also baptized. After their death, John became a monk and began to live in strict asceticism. He wrote a book: ‘On the Priesthood’, after which the holy Apostles John and Peter appeared to him, prophesying for him great service, great grace and also great suffering. When the time came for him to be ordained priest, an angel of God appeared at the same time to Patriarch Flavian (Meletius’s successor) and to John himself. When the Patriarch ordained him, a shining white dove was seen above John’s head. Renowned for his wisdom, his asceticism and the power of his words, John was, at the desire of Emperor Arcadius, chosen as Patriarch of Constantinople. He governed the Church for six years as Patriarch with unequalled zeal and wisdom, sending missionaries to the pagan Celts and Scythians and purging the Church of simony, desposing many bishops who were given to this vice. He extended the Church’s charitable works, wrote a rite for the Holy Liturgy, put heretics to shame, denounced the Empress Eudoxia, interpreted the Scriptures with his golden mind and tongue and left to the Church many precious books of sermons. The people glorified him; the jealous loathed him; the Empress twice had him sent into exile. He spent three years in exile, and died on Holy Cross Day, September 14th, 407, in a place called Comana in Armenia. The holy Apostles John and Peter again appeared to him at the time of his death, and also the holy martyr Basiliscus, in whose church he received Communion for the last time. ‘Glory to God for everything!’ were his last words, and with them the soul of Chrysostom the Patriarch entered into Paradise.

In his magisterial biography of the great Hierarch, J.N.D. Kelly observes, ‘His last words were the thanksgiving which, as Palladios remarks, had been habitually on his lips, and which summarily expressed one of his deepest convictions . . .’ (Golden Mouth—The Story of John Chrysostom: Ascetic, Preacher, Bishop [Ithaca, NY: Cornell U, 1998], p. 285).

Unfortunately, because of Thanksgiving obligations I don’t have time for extended reflection on the holy Chrysostom. If I have more opportunity tomorrow or over the weekend, I may try to post some more on this great Saint, but I make no promises. For now I will just mention two things. First, I had the terrific opportunity to see Fr John Behr give a lecture on ‘The Pastoral Power of Theology—St John the Golden-Mouthed’ in St Louis last year. This brilliant lecture can now be read at the St John Chrysostom Orthodox Church (ROCOR) website here (HT Maximus, by way of Owen). Second, I will offer a short passage—Andrew at Salt of the Earth has one from another work of St Chrysostom’s here—from the book ‘On the Priesthood’ referenced in the Prologue, and which also forms the basis of Fr Behr’s lecture: St John Chrysostom, Six Books on the Priesthood, trans. Graham Neville (Crestwood, NY: SVS, 1977) (my misgivings about Neville’s introduction could make an appearance in a future post). Although St Chrysostom is here describing the ideal pastor, to whom he compares himself unfavourably, the Church can recognize in this passage an unwitting description of himself:

The soul of the priest ought to blaze like a light illuminating the world; but my soul has such darkness enveloping it, through my evil conscience, that it is always hiding itself and cannot frankly gaze upon its Master. Priests are the salt of the earth. But who could readily tolerate my folly and my complete inexperience, except you with your usual excessive regard for me? A priest must not only be blameless, as befits one chosen for so high a ministry, but also very discreet and widely experienced. He ought to be as much aware of mundane matter as any who live in the midst of them, and yet be more detached from them than the monks who have taken to the mountains.

Since he must mix with men who have married and are bringing up children, keep servants, own great possessions, take part in public life, and hold high office, he must be many-sided. I say many-sided—not a charlatan, a flatterer, or a hypocrite; but absolutely open and frank of speech, able to condescend to good purpose, when the situation requires, and to be alike kindly or severe. It is impossible to treat all his people in one way, any more than it would be right for the doctors to deal with all their patients alike or a helmsman to know only one way of battling with the winds. This ship of ours is beset with continual storms; and these storms not only attack from outside, but are engendered within. Great condescension and great strictness are both needed. And all these different methods look to one object: the glory of God and the edification of the Church. (pp. 141-2)

In conclusion, here is the ‘Hymn of Praise’ for St Chrysostom in the Prologue:

The Church glorifies St John
The ‘Golden-mouth’, blessed by God,
Christ's great soldier,
Who is the adornment and boast of the Church:
Profound of heart and mind,
And a golden-stringed harp of words.
He plumbed the depths of mysteries,
And found the pearl that shines as the stars.
Exalted in mind to heaven’s height,
He expounded divine truth;
And his vision is true throughout history.
He gave all to the Son of God.
He revealed to us the horrors of sin,
And the virtues that adorn a man;
He showed us the most precious mysteries,
And all the sweet richness of Paradise.
Evangelist, interpreter of the Gospel
And bearer of spiritual joy,
Zealous for Christ like an apostle,
He would accept no injustice.
He was tormented like any martyr,
And received his torment as a pledge of salvation.
This servant of Christ showed himself true;
Therefore, the Church glorifies Chrysostom.