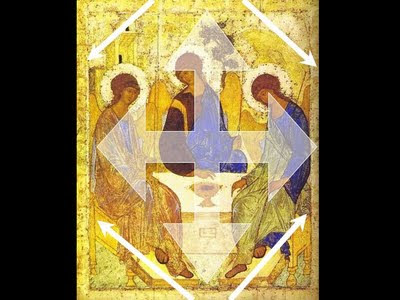 There is a reference to iconography in Scottish theologian Thomas Torrance’s Space, Time & Incarnation (Edinburgh: T&T Clark, 1997), which I actually first saw quoted way back in college in Leonard Stanton, The Optina Pustyn Monastery in the Russian Literary Imagination: Iconic Vision in Works by Dostoevsky, Gogol, Tolstoy, & Others (NY: Peter Lang, 1995), p. 15. Stanton’s use of this passage made enough of an impression on me that during my college stint at Barnes & Noble I actually ordered Torrance’s book just so I’d have the source. Here is the full text cited by Stanton, taken from p. 18 of Torrance:

Space is here [in Nicene theology] a differential concept that is essentially open-ended, for it is defined in accordance with the interaction between God and man, eternal and contingent happening. It is treated as a sort of coordinate system (to use a later expression) between two horizontal dimensions, space and time, and one vertical dimension, relation to God. In this kind of coordination, space and time are given a sort of transworldly aspect in which they are open to the transcendent ground of the order they bear within nature. This means that the concept of space which we use in the Nicene Creed is one that is relatively closed, so to speak, on our side where it has to do with physical existence, but is one which is infinitely open on God’s side. This is why frequently when Byzantine art sought to express this ikonically it deliberately reversed the natural perspective of the dais upon which Christ was represented. The Son of God become man could not be presented as one who had become so confined in the limits of the body that the universe was left empty of His government. He could not be represented, therefore, as captured by lines which when produced upwards met at some point in finite space, but only between lines which even when produced to infinity could never meet, for they reached out on either side into the absolute openness and eternity of the transcendent God.

But I have always wondered what Torrance’s source for this notion was, and I would appreciate any suggestions from Logismoi readers. According to Victor Bychkov, in The Aesthetic Face of Being: Art in the Theology of Pavel Florensky, trans. Richard Pevear & Larissa Volokhonsky (Crestwood, NY: SVS, 1993), Fr Florensky gave some consideration to the ‘inverse perspective’ of iconography in an essay of that title, but his explanation of the phenomenon seems to be a more purely aesthetic and less a theological one (pp. 55-7, 60-1, 92-3). Furthermore, although I certainly admire both Torrance’s and Fr Florensky’s treatments of this issue, neither seems to be based on anything actually made explicit in Orthodox Tradition. I don’t recall seeing in the Fathers’ writings on iconography, for instance, anything quite like Torrance’s analogy between Nicene theology and the iconographic style and perspective per se.
It should be noted that the first chapter of this book, ‘The Problem of Spatial Concepts in Nicene Theology’, is my only first-hand acquaintance with Torrance. I wasn’t sufficiently interested in Reformed theology to keep reading after that, and since then my only other significant encounter with the Scottish theologian has been in the treatment of him in Fr Andrew Louth’s brilliant Discerning the Mystery: An Essay on the Nature of Theology (Wichita, KS: Eighth Day, 2007), pp. 48-54 (which I reviewed here). Although Fr Louth believes ‘there is . . . much to be learnt from the kind of considerations he raises in the course of his books’, he concludes that ‘Torrance is mistaken in the fundamental thrust of his enterprise’ (p. 53). This does not however effect his take on inverse perspective so far as I can tell.
Incidentally, the illustration above is from this helpfully illustrated post by Richard Beck on the subjective of inverse perspective in icons.
Posted by Aaron Taylor at 10:54 AM

this is an interesting topic. when i was walking through the Byzantium exhibition at the Royal Academy in London this spring (http://www.royalacademy.org.uk/exhibitions/byzantium/) I was thinking about these theories concerning reversed perspective, and the supposed theological issues at stake. and I wasn't sure what to make of it. sure, i kind of like the idea that there is some sort of anti-modern, pre-renaissance sensibility going on. but after seeing the 10th or so quite 'secular' (problematic notion in Byzantium perhaps?) portrait of some emperor or eunuch using the same technique and perspective the Florenskijan perspective seem kind of a stretch.
but maybe even the secular is supposed to be some sort of eschatological 'window to heaven'? circular reasoning? perhaps.

I may have misunderstood Bychkov, but it seemed to me that his summary of Fr Florensky's essay would account for secular portraits being painted in inverse perspective (he talks about a difference in culture). On the other hand, I don't see how Torrance's--which is so specifically theological--would so account for it.

I am reading Torrance almost as I type (a consequence of having studied theology in Edinburgh and one does it gratefully given what else is 'out there' around here) but it may be a case of "twonsant weader fwowed up" and it's the wrong volume to help you. However, I really must write to the person who originally recommended him and I think I will ask your question.

Thanks Margaret. I look forward to hearing whether he knows anything!