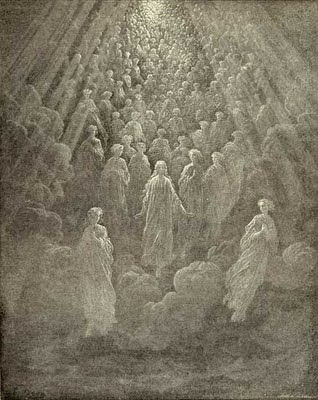 When in the course of my life with books I begin to notice a name recurring—in favourable contexts of course—I typically take it as a sign from God that He is bringing something to my attention. A couple of months ago, three things happened in close chronological proximity to each other: 1) I noticed at Half Price Books a translation of Lucretius’s De rerum natura translated by one Anthony Esolen of Providence College, 2) I noticed on the classroom shelf of my science teacher friend (mentioned here) a book on irony in Christian literature—the author, the same Esolen, and finally, 3) the RC priest who leads the Chesterton Society of which I am a member chanced to mention that there was a recent translation of the Divine Comedy with notes he deemed remarkably good, by, you guessed it, Anthony Esolen, and published by the Modern Library.

I waited for a time, hesitant about spending money when our finances were more than usually strained. But at last I could not resist buying, first, the Lucretius translation (Lucretius, On the Nature of Things—De rerum natura, ed. & trans. Anthony M. Esolen [Baltimore: Johns Hopkins, 1995]), since it was the cheapest of the three and as a used book might not be available at that price again soon. To tell the truth, I was a bit surprised that an evidently Christian scholar would devote so much time to the De rerum natura as to translate it. Of course, I have never read the poem, and knew it only, on the one hand, from a reference to it as a kind of ancient expression of atheist materialism, and on the other, as a representative of the Epicurean philosophy which was the sworn enemy of the Stoics, whose works I have long loved. So I bought the translation for Esolen’s introduction as much as anything, to learn from a fellow Christian what I should appreciate about this work. This I learned indeed, but also how to handle that which I did not appreciate. Here was a significant passage for me—one of the few explicit references to Christianity in the whole introduction:

Again and again he reminds us why we study the teachings of Epicurus: to free our minds from the crush of superstition. The Christian God of love and consolation was unavailable to Lucretius. Greek and Roman gods were to be feared, propitiated. The Psalmist may behold the stars and wonder at the smallness of man and the unreasonable love of God, that He should not only give a passing thought to something so trivial but indeed should make man little less than an angel. Lucretius’s men look at the stars and are overawed; they cringe and worry that all the power that whirls the stars may be aimed squarely at them. . . . Before Epicurus, Lucretius said, religion thrust its monstrous head from the sky, grimacing upon us, menacing. Human life was abject. But Epicurus’s discovery of rational laws has set our spirits free. (pp. 8-9)

I for one couldn’t help but be a little more sympathetic to the poem after that, and the beauties and pleasures of Lucretius’s vision of life appear a bit more innocent, as in this passage (qtd. on p. 10):

When friends in the long grass will lie at ease,
In the shade of a tall tree at the riverside,
Their bodies refreshed and gladdened, at no great cost,
Most pleasantly when the weather smiles and the season
Sprinkles the meadow with fresh and lusty flowers.

I was, of course, not nearly so puzzled over Esolen’s work on the Divine Comedy, and though I delayed a bit longer than in my purchase of the Lucretius translation, I soon bought his translation of my favourite of Dante’s canticas, the Paradiso—Anthony Esolen, trans. & ed., Paradise, illust. Gustave Doré (NY: Modern Library, 2007). Although I have not yet read through his introduction, I quickly found a paragraph that has the virtue of recalling some ideas by two of my favourite commentators on things mediæval: C.S. Lewis and Umberto Eco. After considering possible interpretations of the common observation that the Paradiso is ‘the most medieval’ of the three canticas, Esolen concludes:

I would like to understand it, then, in this sense: the Paradise is indeed the most medieval of the three canticles, in that it most fully embodies the striving of the medieval mind to understand all of reality—material and intellectual, legal and moral and religious, earthly and heavenly, logical and supralogical—as one grand and harmonious whole. And more, if there be more to assert: the Paradise strives to show forth that whole in a work of art that is itself, like the playful and soaring cathedrals of France, a work of ineffable beauty and complexity. For it is Paradise that resumes and perfects the themes and motifs of the other two canticles. It is the work by which the unity of the whole Comedy must be judged. (p. xii)

As for Esolen’s handling of the verse, which is happily paired with the original Italian on the facing page, it appears to be a fairly regular iambic pentameter, with occasional rhyme increasing in frequency, as the translator points out, from one cantica to the next. Here are the last twenty-one lines to give readers a sample (keep in mind that in the book, the second and third lines of each terza are indented):

O Light that dwell within Thyself alone,
who alone know Thyself, are known, and smile
with Love upon the Knowing and the Known!
That circle which appeared—in my poor style—
like a reflected radiance in Thee,
after my eyes had studied it awhile,
Within, and in its own hue, seemed to be
tinted with the figure of a Man,
and so I gazed on it absorbedly.
As a geometer struggles all he can
to measure out the circle by the square,
but all his cogitation cannot gain
The principle he lacks: so did I stare
at this strange sight, to make the image fit
the aureole, and see it enter there:
But mine were not the feathers for that flight,
Save that the truth I longed for came to me,
smiting my mind like lightning flashing bright.
Here ceased the powers of my high fantasy.
Already were my all my will and my desires
turned—as a wheel in equal balance—by
The Love that moves the sun and the other stars. (pp. 357, 359)

I intend to look into the book on irony (Ironies of Faith: The Laughter at the Heart of Christian Literature [Wilmington, DE: ISI, 2007]—here), probably, at first, via loan from my science teacher friend. In the meantime, of course, I located Esolen’s personal site, and also tracked down a few of his articles in First Things and Touchstone (where he is an editor). I quite enjoyed these comments in a review of a translation of Petrarch in The Claremont Review of Books (here):

In short, you cannot interpret or translate Petrarch as if he were merely a modern man who had managed to shake free of the bulky, many-dimensional chrysalis of the medieval cosmos to flit along in our subjectivist world of three dimensions, me, myself, and I. You have to have an ear for theology and Scripture, not to mention Dante, and when you are translating you have to ensure that the echoes are heard. The task as I see it is not to make Petrarch familiar to us, but to familiarize us with him: to encourage us to look upon his work with wonder, inasmuch as it is rich and strange.

These lines are a wonderful response to one my pet peeves in much modern commentary on pre-modern thought and literature. To ‘look upon his work with wonder, inasmuch as it is rich and strange’ is one of my favourite things about reading the old books. In short (pardon the echo), I grow more intrigued with this Esolen with each new piece I discover.
Posted by Aaron Taylor at 8:08 AM

Ironies of Faith is the only book of Esolen's that I own currently (this will probably be short lived - his translation of Lucretius sounds very interesting), but I have enjoyed it so far - he's a wonderful exegete of literature.

P.S. - Have you seen his translation of Tasso's Jerusalem Delivered? That looks really good, too.

No, unfortunately I haven't. I'd like to though! I've got a really old translation of Tasso--I can't even remember the translator's name.

In terms of style, the Esolen Lucretius probably ranks at the top; in terms of philosophical clarity (which I think is the only reason to read Lucretius outside of the Latin original), Walter Englert's translation for the Focus Philosophical Library wins hands down. Like Esolen, Englert approaches the text with a sense of wonder, but it's a directed wonder--not against Lucretius the outmoded Epicurean with a faulty cosmology and science of nature, but for a Latin-writing philosopher who intended to make clear the teachings of his master, but with his own nuances. My sense is that Esolen is deaf to this; he reads Lucretius like a Catholic humanist (which he certainly is). In other words, he reads Lucretius not as his fellow Romans would have read him; that is, not as a philosopher.

If you ever get the chance, Strauss's "Notes on Lucretius," found in the collection Liberalism Ancient and Modern contains an eye-opening interpretation of the Epicurean. It demands a considerable knowledge of the Lucretian text, but in the end I think it points away from the sort of interpretation/translation Esolen provides.

Gabriel> Well that's disappointing! So is Englert's a prose translation? I'm certainly ready to take your advice, but I have this funny aversion to reading poetry in prose translations. (I did read 'El Cid' that way though!)

I should also point out though that this is beginning to sound like a lot of work, which will probably make it less likely that I will actually get around to reading Lucretius! ;-)