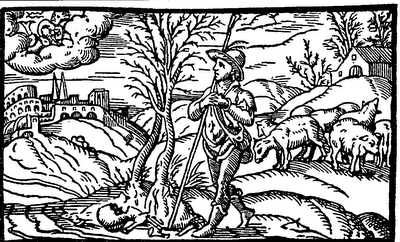 I couldn’t help but feel that just a few words about the calendar were in order, since it is now 17 December on the Church’s calendar and therefore only eight days until the Feast of the Nativity. First of all, following a link to my post on St Olaf of Norway in the combox of another blog, I found a pdf with a really neat article on the old Norse ‘primestave’ calendar (Part 1 is here, Part 2, from which the entry below is taken, is here). Although I don’t know of a way to reproduce the primestave illustrations given in the pdf, I intend to post most of the entries listed in that article as those days occur, beginning with the entry for yesterday, 16 December. Here it is:

16th—Imbredagen. In several Norwegian dialects this was the name for the day(s) in the week before jul, and were fast days [!]. There were other fast-days with this name, at the beginning of Lent, during Pentecost, and the week before Mikkelmass (Sept.).

Second, although I have no wish to add further to the glut of blogging about the famous ‘O Antiphons’ of the Latin Advent liturgy (see here if you are interested), nor to annoy once again my Orthodox blogger friends by making a big deal of these antiphons this year, for those who DO have an interest I thought I would go ahead and offer a little list of links to my posts of last year. In those posts, I offered a few poetic elabourations, past and present, of these antiphons, based on the Sarum practice of beginning with the 16th and adding an extra antiphon, ‘O Virgo Virginum’, just before the Eve of the Nativity. Here they are then:

Finally, I was looking again at Edmund Spenser’s Shepheardes Calendar, of which Hallett Smith has written that its publication, ‘everybody agrees, . . . ushered in the New Poetry of the Elizabethan age’, [1] and I was struck by how well the opening lines of the ‘Januarye Aeglogue’ capture how it felt when I took my children outside to play after the crazy blizzard that struck Oklahoma City last week:

A Shepeheards boye (no better doe him call)
When Winters wastful spight was almost spent,
All in a sunneshine day, as did befall,
Led forth his flock, that had bene long ypent.
So faint they woxe, and feeble in the folde,
That now unnethes their feete could them uphold. [2]

One cannot but contrast what life must have been like for Sarum Christians as the Nativity feast approaches with the secular-paganism of 'New Year' and the two-faced god Janus.

Btw, if you came here looking for Sarum stuff, I'm sorry I don't have more to offer. I really know very little about it beyond the fact that they had an extra 'O Antiphon'!