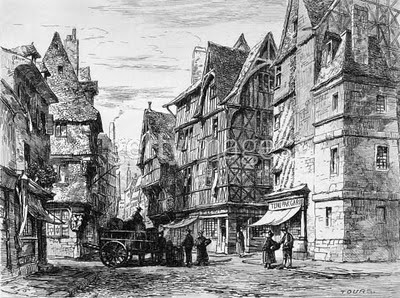 Today, 18 December on the Church’s calendar, we celebrate the memory of St Gatianus (3rd century), MF ‘Gatien’, first Bishop of Tours. The main source for the life of St Gatianus is The History of the Franks (c. 593?) by St Gregory of Tours. [1] Here is St Gregory’s account, from Historiae Francorum X.31:

The first Bishop, Gatianus, was sent by the Pope of Rome in the first year of the Emperor Decius. At that time a vast number of pagans addicted to idolatry lived in the city. By his preaching Gatianus managed to convert some of them to the Lord. He often had occasion to hide from the attacks of those in high place who, when they found him, subjected him to insults and abuse. He used to celebrate the holy mysteries secretly on Sunday in crypts and other hiding-places, with the handful of Christians whom, as I have told you, he had converted. He was a very pious and God-fearing man; had he not been so, he would never have abandoned his home, his relations and his fatherland for the love of our Lord. In such circumstances and of his own free will, or so they say, he lived in the city for fifty years. Gatianus died in peace and was buried in the cemetery in the Christian quarter. [2]

A bit further on, speaking of the renowned St Martin of Tours, St Gregory writes, ‘He [St Martin] translated the body of Saint Gatianus and buried him beside the tomb of Saint Litorius, in the church named after this latter.’ [3]

According to the Catholic Encyclopedia:

The ‘traditional school’, relying on legends that have hitherto not been traced back beyond the twelfth century, have claimed that St Gatianus was one of the seventy-two disciples of Christ, and was sent into Gaul during the first century by St Peter himself. This assertion, which has been refuted by learned and devout writers, is untenable in the face of the testimony of Gregory of Tours.

Apparently Henry James, in his A Little Tour of France (1883), refers to St Gatianus in connection with a tradition that the holy Hierarch had retreated to and celebrated the liturgy in some caves at Marmoutier, where St Martin later established his monastery. James writes:

The abbey of Marmoutier, which sprung from the grottos in the cliff to which Saint Gatianus and Saint Martin retired to pray, was therefore the creation of the latter worthy...The cliff is still there; and a winding staircase, in the latest taste, enables you conveniently to explore its recesses. These sacred niches are scooped out of the rock, and will give you an impression if you cannot do without one... [4]

The image above is an artist's rendering of mediaeval Tours.

His style is barbarized, but less so than the civilization he describes in sixth-century Gaul. Gregory gives marvelous pictures of a violent society; his narrative is full of vigor and force and is a mine of political and social history. His greatest talent is that of delineating personalities. Like all mediaeval histories, Gregory’s account gains in both accuracy and interest as he approaches his own time.