'Come, We Have Found the Desired One'—Apostle Andrew the First-Called 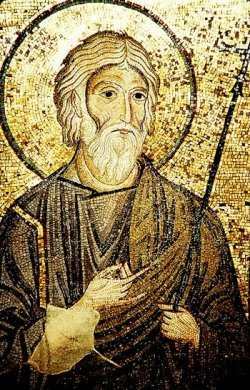 Andrew, the brother of Simon Peter, was one of the two who heard this from John [‘Behold the Lamb of God!’—Jn. 1:36], and followed Him. This same one first findeth his own brother Simon, and saith to him, ‘We have found the Messiah’ (which is interpreted, the Christ), and he led him to Jesus.

He was the son of Jonah and brother of Peter, born in Bethsaida and a fisherman by profession. He was first a disciple of St John the Baptist, but, when John pointed to the Lord Jesus and said: ‘Behold the Lamb of God’ (Jn. 1:36), St Andrew left his first teacher and followed Christ. After that, Andrew brought his brother Peter to the Lord. After the descent of the Holy Spirit, it fell to the lot of the first of Christ's apostles, St Andrew, to preach the Gospel in Byzantium and Thrace, then in the lands along the Danube, in Russia and around the Black Sea, and finally in Epirus, Greece and the Peloponnese, where he suffered. In Byzantium, he installed St Stachys as its first bishop; in Kiev he raised the Cross on high and prophesied a Christian future for the Russian people; in Thrace, Epirus, Greece and the Peloponnese, he brought many people to the Faith and gave them bishops and priests. In the city of Patras he performed many wonders in the name of Christ and brought many to the Lord, among whom were the brother and wife of the imperial governor, Aegeatus. Aegeatus, infuriated by this, put Andrew to torture and then crucified him. While he was still alive on the cross, the Apostle of Christ taught the Christians who were gathered round him. The people wanted to take him down from the cross, but he would not let them. Finally, the Apostle prayed to God and a strange radiance surrounded him. This light lasted for half an hour and, when it disappeared, the Apostle gave his holy soul into God's hands. Thus the first-called Apostle, who first of the twelve Great Apostles came to know the Lord and followed Him, finished his earthly course. St Andrew suffered for his Lord in the year 62. His relics were translated to Constantinople, but his head was later taken to Rome and one hand to Moscow [the relics in Rome were returned by the pope in 1964 to Patras and enshrined there].

It is Eusebius, in History of the Church 3:1, who testifies that St Andrew was sent as Apostle to Scythia. But it seems that it is not until the Russian Primary Chronicle that we learn any details of his activities there (Medieval Russia’s Epics, Chronicles & Tales, rev. & enlarged ed., ed. & trans. Serge A. Zenkovsky [NY: Meridian, 1974], p. 47):

When Andrew was teaching in Sinope and came to Kherson (as has been recounted elsewhere), he observed that the mouth of the Dnieper was nearby. Conceiving a desire to go to Rome, he thus went to the mouth of the Dnieper. Thence he ascended the river, and by chance he halted beneath the hills upon the shore. Upon arising in the morning, he observed to the disciples who were with him: ‘See ye these hills? So shall the favor of God shine upon them that on this spot a great city shall arise, and God shall erect many churches therein.’ He drew near the hills, and having blessed them, he set up a cross. After offering his prayer to God, he descended from the hill on which Kiev was subsequently built, and continued his journey up the Dnieper.

He then reached the Slavs at the point where Novgorod is now situated. He saw these people existing according to their customs, and on observing how they bathed and drenched themselves, he wondered at them. He went thence among the Varangians and came to Rome, where he recounted what had learned and observed. ‘Wondrous to relate,’ said he, ‘I saw the land of the Slavs, and while I was among them, I noticed their wooden bathhouses. They warm them to extreme heat, then undress, and after anointing themselves with tallow, they take young reeds and lash their bodies. They actually lash themselves so violently that they barely escape alive. Then they drench themselves with cold water, and thus are revived. They think nothing of doing this every day, and actually inflict such voluntary torture upon themselves. They make of the act not a mere washing but a veritable torment.’ When his hearers learned this fact, they marveled. But Andrew, after his stay in Rome, returned to Sinope.

St Nicholas has some stirring words about St Andrew in the ‘For Consideration’ section of today’s Prologue:

‘All is given to the apostles’, says St John Chrysostom. This means: all gifts, all powers, all the fullness of the grace that God gives to all the faithful is given to the apostles. We see this in the life of the great Apostle Andrew the First-Called: how he is apostle and evangelist, prophet, pastor and teacher (Eph. 4:11). As an evangelist, he carried the good news of the Gospel to the four corners of the earth; as a prophet he prophesied the baptism of the Russian people and the greatness of Kiev as a city and as a centre of Christianity; as a pastor he founded and organised many churches; as a teacher he tirelessly taught right up to his crucifixion, and then on the cross till his last breath. And, on top of this, he was a martyr. This was by a gift of the Holy Spirit that is not given to all. We see in this apostle, as in all the others, the fullness of the grace of the Holy Spirit. (p. 260)

Andrew’s name too carries with it a true image of his mind. For the Greek ‘Andrew’ means ‘manly’ in Latin. By willingly following the Lord, either at John’s preaching or at the order of the Lord himself, he shows [us] that he belonged to the heritage of those who boldly despise temporal possessions out of love for eternal things, [and] who believe that they will see the good things of the Lord in the land of the living [Ps 26:13]. Until they attain these things, they strive to await the Lord with the psalmist, and to act in a manly way and to strengthen their heart [Ps 26:14].

I have a soft spot in my heart for St Andrew, because as my sister’s birthname was the feminine form of his name, Andrea, I used to ask his intercessions for her conversion to Orthodoxy (a prayer granted over 9 years ago now). St Andrew is also, of course, the patron Saint of Scotland, and of its oldest university—the University of St Andrews, where the delightful RC blogger, the fittingly named Andrew Cusack was an undergraduate. The queen blogger of ROCOR Ireland, Brigit, at Under the Oak, has posted on St Andrew today in a well advised return to her true calling, the Old Calendar menology! ;-) She cites the Martyrology of Oengus on today’s Saint:

30. Andrew who is boldest,
against a cross -step most
perfect—, puts a top, which I
declare, on November’s hosts.

Brigit also quotes a 12th-c. poem from the Codex Maelbrighte, where the physical appearance of Christ and the Apostles is described. Here is the passage on St Andrew:

James (and) Andrew the comrades,
Fair their hairs, long their beard.
Dear, great deacons were the pair,
Both James and Andrew.

In an interesting note to his translation of the Akolouthia for St Andrew (here), Archimandrite Ephrem (Lash) has observed:

Although the Orthodox rite does not have a liturgical season of Advent, from the feast of the Entry of the Mother of God [21 November], when for the first time the Katavasias at Matins are those of Christmas, hymns which prepare for the coming feast of the Nativity feature increasingly in the offices for the major feasts. In the office of St Andrew a number of the Theotokia for Vespers and Matins, including those for the two Canons of the Apostle, are texts which prepare for the Nativity.

As a quick and convenient example, here is Fr Ephrem’s translation of the final sticheron (in Tone 8) after the ‘Both now’ at the Lauds of Matins for the Apostle Andrew 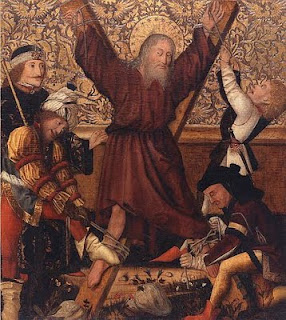 Bethlehem receive the Mother City of God; for she has come to give birth in you to the unwaning light. You Angels, marvel in heaven; mankind give glory upon earth, Magi from Persia bring your triple glorious gift, Shepherds abiding in the fields sing the thrice-holy hymn. Let everything that has breath praise the Maker of all.

Let us acclaim the namesake of courage, that herald of things divine, the first-called of the Saviour’s disciples, and the kinsman of Peter, for as he formerly cried out to him, so doth he now to us: Come, we have found the Desired One.

(This depiction of St Andrew’s Martyrdom, by an unknown Austrian painter of the 15th century, for reasons that are also unknown includes a portrait of Vlad the Impaler looking on from the upper left!)
Posted by Aaron Taylor at 4:30 PM

Does this mean that, per the Latin root, Andrea is "manly"?

Well, the translation of St Bede's expression on this point is worded perhaps a little unclearly. The root of 'Andreas' ('Andrew' or 'Andrea') is Greek and does indeed mean 'manly'. So, yes, 'Andrea' is Greek for 'manly', a word the Church Fathers sometimes use for women who demonstrate exceptional courage or physical asceticism! St Bede's reference to Latin is explained purely because he was in fact writing in Latin, so the word he uses in the original text that is here translated as 'manly' (I assume it's virilis) is the word that he is referring to as 'Latin'. In other words, he's saying 'the Greek word "Andrew" is "virilis" ["manly"] in Latin'. So no, Andrea is not 'manly' per 'the Latin root', but per the Greek. Does that make sense?