'In Her Was All Manner of Philosophy'—St Catherine of Alexandria 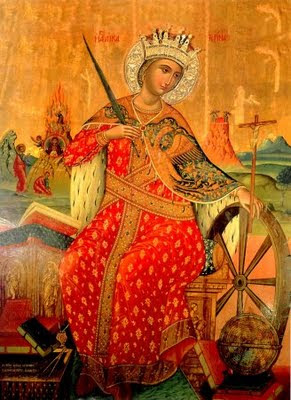 Today, 24 November on the Church’s calendar, we celebrate the memory of the Great Martyr Catherine of Alexandria. I posted on St Catherine for her feastday last year (here), so I’ll just add one or two things to what I offered there. First, here is the account of her life in the Prologue (St Nicholas [Velimirović], The Prologue from Ochrid, Vol. 4, trans. Mother Maria [Birmingham: Lazarica, 1986], p. 235):

The daughter of King Constus, she lived with her mother in Alexandria after her father’s death. Her mother was secretly a Christian and, through her spiritual father, brought Katharine to the Christian faith. In a vision, St Katharine received a ring from the Lord Jesus Himself as a sign of her betrothal to Him. This ring remains on her finger to this day. Katharine was greatly gifted by God, exceptionally well-educated in Greek philosophy, medicine, rhetoric and logic, and added great physical beauty to this. When the wicked Emperor Maxentius offered sacrifice to idols and ordered everyone to do the same, St Katharine came with daring before him and denounced his idolatrous errors. The Emperor, seeing that she surpassed him in wisdom and learning, summoned fifty of the wisest men, to dispute with her about faith and put her to shame, but Katharine was wiser than they, and put them to shame. The furious Emperor commanded that all fifty wise men be burned. These wise men, at St Katharine’s prayers, all confessed the name of Christ at the moment of death, and proclaimed themselves Christians. When the martyr was in prison, she brought Porphyrius the general, with two hundred of his soldiers, to the Faith, and also the Empress, Augusta-Vasilissa. They all suffered for Christ. At St Katharine’s martyrdom, an angel of God appeared to her, stopping and breaking the wheel on which she was being tortured, and after that the Lord Christ Himself appeared to her, strengthening her. After many tortures, Katharine was beheaded with the sword at the age of eighteen, on November 24th, 310. Milk flowed from her body in place of blood. Her wonderworking relics are preserved on Sinai.

This article, by one Paul Carus in a 1907 issue of The Open Court, points out that the earliest reference to St Catherine is in a 9th-c. document called the Menologium Basilianum, and reads as follows:

The martyr Aikaterina was the daughter of a rich and noble prince of Alexandria. She was very beautiful, and being at the same time highly talented, she devoted herself to Greek literature as well as to the study of the languages of all nations, and so she became wise and learned. And it happened that the Greeks held a festival in honor of their idols; and seeing the slaughter of animals, she was so greatly moved that she went to the King Maximinus and expostulated with him in these words: ‘Why hast thou left the living God to worship lifeless idols?’ But the Emperor caused her to be thrown into prison, and to be punished severely. He then ordered fifty orators to be brought, and bade them to reason with Aikaterina, and confute her, threatening to burn them all if they should fail to overpower her. The orators, however, when they saw themselves vanquished, received baptism, and were burnt forthwith, while she was beheaded.

According to the ancient usage, Saints Catherine and Mercurius were celebrated on the 24th of this month, whereas the holyh Hieromartyrs Clement of Rome and Peter of Alexandria were celebrated on the 25th. The dates of the feasts of these Saints were interchanged at the request of the Church and Monastery of Mount Sinai, so that the festival of Saint Catherine, their patron, might be celebrated more festively together with the Apodosis of the Feast of the Entry of the Theotokos. The Slavic Churches, however, commemorate these Saints on their original dates.

In regards to my earlier post, I’d like to repeat the interesting point that this woman, who has left no written works behind her, has nevertheless traditionally been considered the patron Saint of scholars and philosophers (she is, for instance, the patron of Balliol College, Oxford). Here is a passage from the Golden Legend of Jacobus de Voragine (William Caxton's translation) discussing her philosophical virtues:

First she appeared marvellous in wisdom, in her was all manner of philosophy. Philosophy is divided in three, in theory, in practice, and in logic. Theory is divided in three, that is intellectual, natural, and mathematical. The blessed Katherine had science intellectual in knowledge of things divine, of which she used against the masters, to whom she proved to be but one very God only, and convanquished all the false gods. Secondly, she had science natural of which she used in disputing against the emperor. Thirdly, she had science mathematical, that is a science that be holdeth the forms and the manner of things, and this science had she in despising the earthly things, for she withdrew her heart from all earthly matter. She showed to have this science when she answered to the emperor, when he demanded who she was, and said: I am Katherine, daughter of king Costus, and how she had been nourished in purple. And hereof used she when she enharded the queen to despise the world and herself, and to desire the reign perdurable. The practice is divided in three manners, in ethic, economic, and politic. The first teacheth to inform manners and adorn him with virtues, and that appertaineth to all men. The second teacheth to rule and govern well his meiny, and that appertaineth to them that have men to govern. The third appertaineth to the governors of cities, for she teacheth to govern the peoples, the cities, and the commons. And these three sciences had the blessed Katherine. First, she had in herself all honesty of manners; secondly, she ruled her meiny laudably, which was left to her, thirdly, she informed wisely the emperor. Logic is divided in three, in demonstrative, in probable, and in sophistical. The first pertaineth to philosophers, the second to rhetors and logicians, and the third to sophisters, and these three sciences had Katherine in her, for she disputed with the emperor.

Finally, I shall now, as promised, offer something from the beautiful blog, Under the Oak. The resident blogger there, an Irish Orthodox lady fittingly named Brigit, has discovered an Old Irish poem in praise of St Catherine (here is Brigit’s post, which also features the Irish text; here is her source):

Star of the world, Catherine,
the helper of the Greeks,
Helping the chosen children, saving each,
there at their dying.

A green brow on the Greek king's daughter
not captured by a suitor—
in the shade of her cheeks is brightness
and a berry's color.

Berry's color and sun's garland
in crimson cheeks—
many a knee bending from the source
in tufted locks.

In the shape of her curved eyes, Catherine
is not surpassed by Greek women.
Curved eyes do not look at a young man—
bright-toothed dark mouth.

Face like an apple, breast like a swan,
a virgin not violated.
Down is not brighter than her shining white hand—
green eyes, bright cheeks.

The virgin with her cheeks will not be found
without my suit;
stretch your cloak over my madness,
son of Mary.

Brigid of Ireland and Scotland,
the virgin of the islands—
she is the misty-bright flower of the young women,
coral-collared.

Athrachta, helper of Limerick—
speedy enough
is the white-soled young woman of the Boyle,
wax candle.

Thank you very much for this article... My wife's name is Karen and we were told that her name in greek would be katherine... being greek and student of philosophy... it was heartfelt to find out that she is St. Katherine was the partoness of Philosophers... which became even more enjoyable when I read the first stanza of the poem...

Looking at the other topics of your blog... I look forward to reading your articles and commend you diligence to get the word out... the logoi like it moves you to logos...

Thank you for your kind words, sir. I am glad to hear that my post on St Catherine was of benefit to you and your wife. There should be plenty to read around here, although as you can see my posting has slowed down tremendously in the last several months!