GKC & Lewis on the New Barbarism 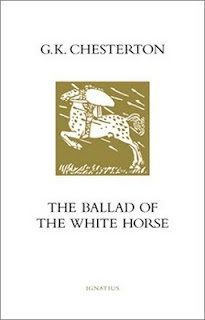 Yesterday I just finished re-reading G.K. Chesterton’s masterpiece of a narrative poem, The Ballad of the White Horse, illust. Robert Austin, ed. Bernadette Sheridan, IHM (SF: Ignatius, 2001). I had thoroughly forgotten the ending, including Alfred’s ‘vision’ in Book VIII, which Sheridan points out is believed by some to be ‘the most significant part of the Ballad’ (p. 220, n. to VIII:233-35,245-47). The general import of the vision is of a more ‘prophetic’ bent in the Old Testament sense of that term than what I usually do here at Logismoi, but it is very much in keeping with this blog’s ethos and raison d’être. Here is the relevant passage in full; the speaker is King Alfred himself (pp. 166-70):

‘Though I give this land to Our Lady,
That helped me in Athelney,
Though lordlier trees and lustier sod
And happier hills hath no flesh trod
Than the garden of the Mother of God
Between Thames side and the sea,

‘I know that weeds shall grow in it
Faster than men can burn;
And though they scatter now and go,
In some far century, sad and slow,
I have a vision, and I know
The heathen shall return.

‘Not with the humour of hunters
Or savage skill in war,
But ordering all things with dead words,
Strings shall they make of beasts and birds,
And wheels of wind and star.

‘They shall come mild as monkish clerks,
With many a scroll and pen;
And backward shall ye turn and gaze,
Desiring one of Alfred’s days,
When pagans still were men.

‘The dear sun dwarfed of dreadful suns,
Like fiercer flowers on stalk,
Earth lost and little like a pea
In high heaven’s towering forestry,
—These be the small weeds ye shall see
Crawl, covering the chalk.

‘But though they bridge St Mary’s sea,
Or steal St Michael’s wing—
Though they rear marvels over us,
Greater than great Vergilius
Wrought for the Roman king,

‘By this sign you shall know them,
The breaking of the sword,
And Man no more a free knight,
That loves or hates his lord.

‘Yea, this shall be the sign of them,
The sign of the dying fire;
And Man made like a half-wit,
That knows not of his sire.

‘What though they come with scroll and pen,
And grave as a shaven clerk,
By this sign you shall know them,
That they ruin and make dark;

‘By all men bond to Nothing,
Being slaves without a lord,
By one blind idiot world obeyed,
Too blind to be abhorred;

‘By terror and the cruel tales
Of curse in bone and kin,
By weird and weakness winning,
Accursed from the beginning,
By detail of the sinning,
And denial of the sin;

‘By thought a crawling ruin,
By life a leaping mire,
By a broken heart in the breast of the world,
And the end of the world’s desire;

‘By God and man dishonoured,
By death and life made vain,
Know ye the old barbarian,
The barbarian come again—

‘When is great talk of trend and tide,
And wisdom and destiny,
Hail that undying heathen
That is sadder than the sea.

‘In what wise men shall smite him,
Or the Cross stand up again,
Or charity or chivalry,
My vision saith not; and I see
No more; but now ride doubtfully
To the battle of the plain.’

Citing several passages in Orthodoxy, Sheridan surmises that a few of these lines may be specific references to Herbert Spencer, H.G. Wells, R.J. Campbell, Henrik Ibsen, Friedrich Nietzsche (along with whom GKC mentions Schopenhauer, Tolstoy, and even his friend and sparring partner, G.B. Shaw), and Oscar Wilde, all of whose ideas are still of course in circulation in one form or another (pp. 221-3).

Incidentally, this theme of the return of the ‘barbarians’ is one I have touched upon before here. There, I understood it from a slightly different aspect. GKC is warning us against the learned men of our day who don’t believe in truth and such and therefore positively undermine civilisation. I was worrying about those in whom civilisation has already been undermined and who therefore continue to let the ‘small weeds . . . / Crawl, covering the chalk’ (Bk VIII, ll. 266-7, p. 167). Fortunately, C.S. Lewis (there he is again), has referred to this problem with his usual insight, in a passage from Screwtape that Kevin Edgecomb posted last year (The Screwtape Letters, with Screwtape Proposes a Toast [NY: HarperCollins, 2001], pp. 150-1):

Only the learned read old books and we have now so dealt with the learned that they are of all men the least likely to acquire wisdom by doing so. We have done this by inculcating the Historical Point of View. The Historical Point of View, put briefly, means that when a learned man is presented with any statement in an ancient author, the one question he never asks is whether it is true. He asks who influenced the ancient writer, and how far the statement is consistent with what he said in other books, and what phase in the writer’s development, or in the general history of thought, it illustrates, and how it affected later writers, and how often it has been misunderstood (specially by the learned man’s own colleagues) and what the general course of criticism on it has been for the last ten years, and what is the ‘present state of the question’. To regard the ancient writer as a possible source of knowledge—to anticipate that what he said could possibly modify your thoughts or your behaviour—this would be rejected as unutterably simple-minded. And since we cannot deceive the whole human race all the time, it is most important that to cut every generation off from all others; for where learning makes a free commerce between the ages there is always the danger that the characteristic errors of one may be corrected by the characteristic truths of another. But thanks be to Our Father and the Historical Point of View, great scholars are now as little nourished by the past as the most ignoble mechanic who holds that ‘history is bunk’,

And backward shall ye turn and gaze,
Desiring one of Alfred’s days,
When pagans still were men.

—seem to anticipate, and therefore may well be the inspiration for, Lewis’s wonderful poem, ‘A Cliché Came out of Its Cage’, in Poems, ed. Walter Hooper (San Diego: Harcourt, 1992), pp. 3-4. Lewis first describes a vision of Graeco-Roman paganism, concluding—

Heathendom came again, the circumspection and the holy fears . . .
You said it. Did you mean it? Oh inordinate liar, stop.

He then rhapsodises about the virtues of Norse paganism, and finishes with:

Are these the Pagans you spoke of? Know your betters and crouch, dogs;
You that have Vichy-water in your veins and worship the event,
Your goddess History (whom your fathers called the strumpet Fortune).

I am still making my way through the hymn book. Many thanks. I plan on posting about a few of the ditties in the future.

Have you seen this?

Makes me feel better about my wife spending money at Hobby Lobby.

Your post--and especially the Lewis segment--puts in the mind of Fr Louth book!
Dad

Owen> Holy canoli! That's one of the more awesome things I've ever seen! The shots of the campus in the video actually drew a tear from my eye. I just bought a few things from Hobby Lobby today. I plan on becoming a more regular customer. I may also beg that college for a job.

Dad> Yes indeed! Actually, I have a bit of an irony to relate in an upcoming post about that passage from Screwtape. But it speaks more of the 'ignoble mechanic' than of the great scholar, and I'd hate to hurt his feelings.

I remember there was a weird and entirely unexpected backlash I experienced in posting that Screwtape selection and commenting on it. The trackbacks in that post lead to some of it. Apparently there are people in this world who find the critique of C.S. Lewis more powerful than that of anyone else, and simply can't accept that his words mean what they say if he is critiquing their own failures.

That campus really does look beautiful. It'll be worth a visit, I'm sure! Think of the goodies that are going to end up in the library!

Kevin> I hadn't noticed that before when I saw the post on your blog, but I went and read it after seeing this comment. That guy that said Lewis 'would never have made a good scholar' sure made a fool of himself! And what a misreading of the passage from Screwtape! I applaud you, sir, for braving the ire of these biblical studies thickies.

As for the library of the C.S. Lewis College, my thoughts have not long drifted from it since receiving Owen's fateful link. Why do you think I'm still awake at 1:26 am CST?

Could anyone who feels he knows the answer explain what Lewis means by "worship the event"? (in the "Cliche" poem, next to last line)

It's been puzzling me. I guess there isn't much chance of getting an answer, though, seeing that the thread is old....

I take him to be referring to those who believe that because something has happened or will happen it is therefore right to support it or go along with it. French collaborators with the Nazis are one of the implied examples in these lines, but another one which immediately occurs to me is the Marxists. Lewis believes that if Nazism or Marxism are morally wrong, they ought to be resisted at all costs, even if one should die in the attempt. He takes the old pagan Norse worldview as the ultimate example of this belief, because they believed that the world, men, and even the gods would eventually perish in the battle with the forces of evil, but that it is a battle that should be waged anyway.

I hope that helps!