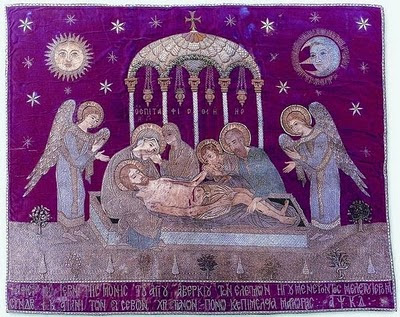 I was surprised, upon returning Sunday night from the Louisville conference, to discover an e-mail from David Shariatmadari, commissioning editor for the feature ‘Comment is free—Belief’ at the UK Newspaper, The Guardian, asking if I could write a 600-word op-ed on Orthodox Lent. Although this sort of thing is not really my bailywick, I agreed, and in a bit of a rush completed something that satisfied David. Although I’m not completely happy with the finished product myself and did not intend to advertise it too much, somehow or another my chief propagandist, Owen White, came across it and posted a link. As I get more readers from him than from any other source, the proverbial cat is now quite out of the bag. So here, dear readers, is my repost of the article. Feel free to comment here, but I could probably use even more support in the comments thread for the article itself.

A season of bright sadness
For Orthodox Christians, the penitential season of Lent means much more than fasting

Many Christians in the West, Catholic and Protestant, are familiar with the penitential season preceding Easter which is known as ‘Lent’. But the observance of this season is unusually elabourate among the Orthodox Christians of the East, and unfamiliar to most outsiders.

In the Orthodox Church, Lent is first and foremost a liturgical period. In other words, its most important component is the liturgical texts and services that are sung throughout the season. The collection of Lenten liturgical material is known as the Triodion, and it is actually first brought out and used three weeks prior to Lent proper.

Having completed these three weeks of preparation, Orthodox Lent begins, not on an ‘Ash Wednesday’, but on a Monday, known as ‘Clean Monday’. On Clean Monday, observant Orthodox Christians begin the most obvious part of the Lenten season—fasting. An Orthodox fast consists of abstinence from meat, eggs, dairy products, fish, wine, and oil. It is a diet that Orthodox should be accustomed to, as it is also kept on most Wednesdays and Fridays throughout the year, and during Advent and other liturgical seasons.

The Lenten fast, however, must never become a source of pride on the one hand, or something oppressive on the other. It is a measuring-stick for our individual practice. If we keep it faithfully, we must say, ‘We are unprofitable servants: we have done that which was our duty to do’ (Lk 17:10). If we fall short of the standard for any reason, we must reproach ourselves and try to do better. Fasting is primarily about obedience, and thus, humility. But it also creates a sense of need and sobriety. It teaches us to seek our consolation in things of the spirit rather than of the flesh.

For fasting, even undertaken in the right spirit of humility, is merely a physical accompaniment to the real heart and joy of Lent: the prayer and worship that are intensified during this season, with some churches holding several services throughout the week. The centuries-old texts of the Triodion, full of poetry, meditation, and profound truth, are one of the greatest treasures of the Orthodox Church. It is here that we encounter what the influential theologian Fr Alexander Schmemann has called the ‘atmosphere’, the ‘state of mind, soul, and spirit’ which is to permeate our lives and which he calls ‘bright sadness’—a poetic translation of the ‘joy-making mourning’ recommended by St John Climacus in his Ladder of Divine Ascent.

The Triodion reminds us that we have fallen short, that we are not the people we should be, that we have become entirely focused on aggrandising and sating ourselves, and thereby these ancient services engender a sense of sorrow. But the sense of freedom we experience as we relinquish this terrible self-centredness begets joy in our hearts. If we do not to some extent attain to this joy-through-mourning, we have entirely missed the point of Lent.

Orthodox have not only this truth to offer their fellow men, but a concrete, indeed a beautiful means of actualising it in our lives. But even if not all are able to come and participate in the enacting of the ‘bright sadness’ of Orthodox Lent, surely this is a time of year for all to ponder its wisdom. As long as there is evil in the world, we can be sure that some of it still lies hidden in our hearts. And as long as we are able to shed tears over our condition, there remains hope that we will one day see the glorious day of Resurrection.

David> Thank you for your confidence, sir! Unfortunately, I was constrained a little bit. For one thing, I had to keep it under 600 words, which I found very difficult. For another, I was told to avoid quotes, which are, obviously, my life's blood. I myself was rather dissatisfied with the result, but hey, I'm supposed to be paid for it!

Aaron, I enjoyed the piece. It does all that one might ask of an op-ed. Quotes would be out of place, as would a more objective, academic style. People are already in danger of seeing Orthodoxy as a cultural artifact with quaint echoes of the past; by presenting the church as a living reality and speaking in the first person, you defeat such a simplistic view. Here's hoping it will lead to more exposure!

I may not have been the first, but I forwarded the link to His Grace Savas. (Consider yourself warned.) Surely he's responsible for a number of your readers, myself included!

With respect, and certainly without intended to "gang up" on David.R (given the 4th comment above), I too believe that the article was right on target. Target, of course, is the key word. As the commenter above indicates, the general public (perhaps particularly in the UK) is not knowledgeable or favorably disposed to Orthodoxy; consequently, addressing that audience requires a significantly different "touch" than you commonly use in Logismoi. That audience will not care about scholarship or erudition, both of which might be considered "pearls before swine." Perhaps St Paul's admonition--to be "all things to all men that I might by all things save some"--is the best rule of thumb. I believe the bar need not be raised for this readership; it is precisely where it should be.

Taylor, Steve (is Steve Taylor out there?)> Thank you for your comments. They seem to me correct assessments of the situation. 'Pearls before swine' struck me as a particularly apt expression after seeing a few of those comments!

Well, hello Aimee Cox Ehrs, Managing Editor of Holy Cross Orthodox Press! I didn't realise you were hanging around here! Yes, I'm glad that you sent it to His Grace. I've no doubt he labours tirelessly on my behalf, but unfortunately for me I'm not able either to see his labours nor to gauge their fruits. Between the posts I see on Owen's blog, and StatCounter, where I can see a precise number of people that have followed links at his blog to mine, Owen is bound to get all the credit. Now that you mention it though, the suspicion has entered my head that it may even have been the Bishop of Troas who brought Logismoi to Mr Shariatmadari's attention. Hmmmm....

Thanks again for the Yannaras book--I hope it stimulated some more interest. Any chance I might be able to get a copy of Vaporis's book on the New Martyrs? It would come in very handy around here!

Aaron,
I thought that your short 600 word explanation of Orthodox lent was well done. I also like that pic of you on The Guardian website.

It was a good article, Aaron, and appropriately done given the constraints you had to work within and the audience addressed. Axios!

As for the comments, that's sadly what's to be expected these days. Pretty mild, actually, for the vegetarian/EggsArePagan/It'sAllALie!!1!!!1 crowd.

Nice job. Don't spend all that crazy OpEd money in one place!

A very good article Aaron; thank you very much.

I caught the link reposted on one of the countless Orthofora on the internet. Very good and informative article; I thought it struck just the right note.

Of course, the comments...well, it's the UK, after all. Tolkien, Lewis et al., have been gone for some time.

I posted it on my FB page before I made my Lenten Exodus. Via email I can see that it has been well received. Several friends have noted that 'the author' must Orthodox, because he really gets us. Bravo.

Thank you for your kind words, dear readers.

Svetlana> I see that you're in Texas somewhere. Do you mind if I ask where? I know a few Orthodox in the Lone Star State, and have been known to visit it every once in awhile.