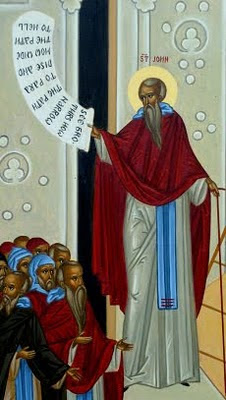 Monday I read in the Ladder 3:9, ‘Run from places of sin as from the plague. For when fruit is not present, we have no frequent desire to eat it.’ [1] Although I feel sure I’ve heard or read various would-be moral philosophers in our day argue that we are not virtuous if we merely avoid temptation (it strikes me as a classic Protestant argument against monasticism), the only place I can recall this argument off the top of my head is in the mouth of one of the charactres in Anne Brontë’s tragically underappreciated novel, The Tenant of Wildfell Hall.

In Vol. 1, Chapt. 3, when Helen Graham reveals that she has been innoculating her son against the temptations of alcohol by giving it to him as medicine, the narrator, Gilbert Markham, states, ‘What is it that constitutes virtue, Mrs Graham? Is it the circumstance of being able and willing to resist temptation; or that of having no temptations to resist?’ [2]

Helen of course unwittingly comes close to the view of the famous Sinai Abbot in the course of her eloquent reply, when she says concerning her son, ‘God knows he will have temptations enough to assail him, both from within and without, when I have done all I can to render vice as uninviting to him, as it is abominable in its own nature . . .’ [3]

Stevie Davies, in her note on Markham’s question, observes:

Markham recites the essence of the doctrine of experience and choice famously expounded in Milton’s Areopagitica (1644): ‘If every action which is good, or evill in man at ripe years, were to be under pittance, and prescription, and compulsion, what were vertue but a name . . . when God gave him reason, he gave him freedom to choose, for reason is but choosing’ (Complete Prose Works, Vol. 2, ed. Ernest Sirluck (Yale 1959), p. 527). Anne Bronte’s position was a modified version of this; but her experience of the corruption latent in human nature taught her caution, and Wildfell Hall multiplies instances of men incapable of resisting temptation, however privileged their position. This is why Helen attempts behavioural immunization of her son. [4]

Unfortunately, Plato, whose ethics overlap with Christianity in some important ways, clearly goes on this issue in the opposite direction to St John Climacus and Helen Graham. Indeed, in Laws 647d, the great philosopher recommends indulgence specifically in alcohol as a means to fortify oneself in the virtue, arguing:

A man has to fight and conquer his feelings of cowardice before he can achieve perfect courage; if he has no experience and training in that kind of struggle, he will never more than half realizehis potentialities for virtue. Isn’t the same true of self-control? Will he ever achieve a perfect mastery here without having fought and conquered, with all the skills of speech and action both in work and play, the crowd of pleasures and desires that stimulate him to act shamelessly and unjustly? Can he afford not to have the experience of all these struggles? [5]

But of course no one ever accused Plato of being too pessimistic about human nature. Perhaps he might have thought differently had he too had been married to Arthur Huntingdon! At any rate, I intend to give my daughter, Elisabeth, and any others I may have, Wildfell Hall to read before they even think of looking for a spouse. I think Anne will be much more useful in this regard than Plato.
[1] St John Climacus, The Ladder of Divine Ascent, rev. ed., tr. Archim. Lazarus (Moore) (Boston: HTM, 1991), p. 15.

At the beginning of his XIIIth Conference, St. John Cassian has an interesting note on how the external abstinence of the philosophers was incomplete when compared with the abstinence of heart and mind achieved by the Christian ascetic.

Ghandi was another believer in the Platonic idea of courting temptation in order to struggle with it. He did this in some rather scandalous ways, which I won't enumerate.

All that said, the monk or desert-dweller does seek out struggle, but of an internal rather than external kind. He doesn't visit bars in order to fight the temptation to drink, but he does visit the desert in order to struggle with the temptations of his own thoughts. Perhaps the distinction is that the monk in his humility does not court temptation in the same way that Plato is suggesting.

Yes, this is what I liked about Helen's comment 'God knows he will have temptations enough to assail him, both from within and without'. The withdrawal from the world is what allows the real fundamental struggle to begin.

Taylor and Aaron > I'm not sure I follow the logic of Helen - in administering alcohol to her son, she seems to be following the advice of Plato, not St. John Climacus. But in any case, on this topic I have understood it like this: flee from unnecessary tests (places of sin), seek training (ascetic practice). As Helen points out, there will be tests enough whatever we do.

Mark: I think there is a difference between a trial and a danger - the danger is that which we routinely will fail to resist... the trial is that which will make us stronger. No man has been made stronger by seeking to stop a moving train; but he may gain some strength by pushing a heavy object.

However, would not the essence of Plato's advice actually being followed better than Plato himself is suggesting -- ? Since we believe it is not the acts but from within that sin comes, the man who renounces the world is perhaps confronting the source of his sins more directly and courageously, and so rather than struggling against the outward manifestation that is the passion full borne, he deals with the passion or temptation when it first comes to him.

Instead of giving into lustful suggestions and doing the acts to gain mastery over them, mastery over them is gained by struggling with the impulse, urge or passion where it begins - in the mind.

But I think when it comes to things that are dangerous our best course - and it is a humbling one - is to flee from them so we will not be destroyed. Both the 'escape' and the 'innoculation' seem similar in this regard: They are essentially removing the temptation.

Cowardice and lack of virtue would consist on an insistance that all temptations be removed. But it is equally bad to believe that it is ideal that they all be there - a line has to be drawn somewhere.

It doesn't help (from a standpoint of common laws) that different people are endangered by different vices - !