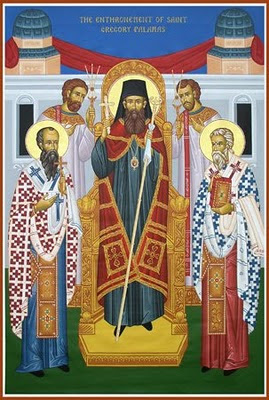 Some of the contemporary theologians in the Orthodox world, although they may be talented scholars and thinkers, and although they may have the best of intentions, have not only departed from the ethos of St Gregory Palamas, they have begun directly and willfully to contradict him. Let us recall Fr Georges Florovsky’s faithful summary of the place of St Gregory in the Orthodox Tradition:

St Gregory begins with the distinction between ‘grace’ and ‘essence’: e theia kai theopoios ellampsis kai charis ouk ousia, all’ energeia esti Theou [the Divine and Divinizing illumination and grace is not the essence, but the energy of God; Capita Phys., Theol., etc., 68-9]. This basic distinction was formally accepted and elaborated at the Great Councils of Constantinople, 1341 and 1351. Those who would deny this distinction were anathematized and excommunicated. The anathematisms of the council of 1351 were included in the rite for the Sunday of Orthodoxy, in the Triodion. Orthodox theologians are bound by this decision. [1]

Turning now to [Metropolitan] John Zizioulas [of Pergamon], we find that he does not define theosis in terms of participating in the divine energies. . . . Unlike Lossky, Yannaras and most other Orthodox theologians, he has serious reservations about the whole concept of the energies. Palamas’ teaching seems to him to make the energies ‘an ontological notion’—to give them a reality apart from the divine being. . . . His idea of theosis is therefore centered on the concept of personhood, not on participation in the energies. [2]

But it wasn’t enough for Russell simply to state Met. John’s highly dubious position of claiming to ‘know better’ than the ‘light of Orthodoxy, support and teacher of the Church’, [3] as we chant in the Troparion of St Gregory. Russell had to try to defend Met. John by making St Gregory’s teaching into a theologoumenon:

Those who found it helpful to use his thinking were free to do so, and the mid-fourteenth century synods of Constantinople pronounced it Orthodox. Other approaches, however, could coexist with it provided they did not attack it. [4]

Now, in light of Fr Florovsky’s observations, it’s wrong enough to say that the Hesychast Synods simply gave those who ‘liked’ St Gregory ‘permission’ to use his theology, but even were we to allow this licentious interpretation, this is no defense of Met. John. For to say that St Gregory’s teaching has some kind of negative theological consequence is to attack it. If Russell has accurately represented him, Met. John and St Gregory cannot simply ‘coexist’. In vindicating the latter it seems to me that the Hesychast Synods actually place the former under anathema, and those anathemas are pronounced by the entire Church every Sunday of Orthodoxy. It is a dangerous business to second guess such a teacher. The very first sticheron about him at Vespers for this Sunday says of St Gregory Palamas:

He is the trumpet of theology, the herald of the fire of grace, the honoured vessel of the Spirit, the unshaken pillar of the Church, the great joy of the inhabited earth, the river of wisdom, the candlestick of the light, the shining star that makes glorious the whole creation. [5]

The next two stichera call him ‘the fervant protector of the Faith, the great guide and teacher, the well-tuned harp of the Spirit’, and ‘the teacher of the Church, the herald of the light of God, the initiate of the heavenly mysteries of the Trinity’. [6] In the doxasticon from the Aposticha at Vespers, we chant, ‘Thy words, inspired by God, are a ladder leading us from earth to heaven.’ [7] Finally, consider these troparia from the Fifth Ode of the canon of the Saint at Matins:

Gregory most wise, thy words and sacred writings are dew from heaven, honey from the rock, the bread of angels unto those that hear or read, sweet nectar and ambrosia, and a fount of living water.

Earth and sea acknowledge thee as their common teacher, as the holy pillar of Orthodoxy and the sacred armoury of divine dogmas, as a wise and saintly theologian, as the comrade and companion of the apostles. [8]

Is this how one treats ‘dew from heaven’—parsing and questioning it on the basis of some philosophical technicality? If earth and sea acknowledge St Gregory Palamas ‘as their common teacher’, is it appropriate for us mere academic, intellectual ‘theologians’ to presume to correct such a teacher, an ‘initiate of the heavenly mysteries of the Trinity’? Can we improve upon words ‘inspired by God’?

Let us rather strive to follow earth and sea in acknowledging him. Fr Florovsky emphasises that St Gregory Palamas ‘was rooted in the tradition’, [9] and as he asks of those who would practise theology, ‘Should we not stand, conscientiously and avowedly, in the same tradition also as “theologians”, as witnesses and teachers of Orthodoxy? Can we retain our integrity in any other way?’ [10]

Well, at least the Sourozh diocese hasn't ordained Russell [yet]. He was a Catholic priest, an Oratorian of the Brompton Oratory some 15-20 years ago, when he suddenly decamped and set up house with a divorced woman. It was then he went Eastward and began his Orthodoxy bit. Perhaps he was not interested in being released from his orders and she wasn't interested in a RC annulment. 'Personal theosis' - how Depeche Mode. Such a view seems to fit the Orthodoxy they are going for out there in the wacky, wonderful, fanciful world of Sourozh.

We're definitely safer following Fr Georges on this one. Russell's treatment is really disappointing - I'll confess that I read the first 90 pages or so and was either bored or distracted and didn't finish his book, so I missed his treatment of of Met. John and the question of participaing in the energies. I can't recall being dismayed by the first part of the book, but rather unengaged.

And yes - the stichera for Saturday's Vespers were really delightful!

Aaron, thank you for your post. I think that one of the main pitfalls of academic theology is the temptation to pit one father against another, as if they were all philosophers attempting to set up competing schools of thought. This seems to be the charge often brought against St. Gregory, that he introduced something new into the faith. Nothing is farther from the approach to patristic authority taken by the fathers themselves. I have been working on this question in St. Athanasius. I like this quote from his "De Synodis": "Certainly it is unbecoming to make the one conflict with the others; for all are fathers; nor is it religious to settle, that these have spoken well, and those ill; for all of them fell asleep in Christ" (22). He compares fathers who seem to disagree to St. Paul, who wrote in one way on the law to the Romans and in another way to the Hebrews. Paul wasn't contradicting himself, but speaking to the particular needs of each group he was addressing.

In St. Gregory's case, although previous fathers did not use the same words, the essential meaning is there - that God's essence is incomprehensible, and that we participate in his divine energies. I came across another quote from Athanasius recently which seemed to coincide with St. Gregory, using approximate terms: "And again men, being incapable of self-existence, are enclosed in place, and consist in the Word of God; but God is self-existent, enclosing all things, and enclosed by none; within all according to His own goodness and power, yet without all in His proper nature" (De Decretis, 11). I haven't looked for any references in the secondary literature, but it seems to indicate the same distinction that St. Gregory makes.

Thank you so much for this post. It heartens me to know there are fellow bloggers out there that do not second guess the Fathers and hold them up to a modernistic scrutiny which makes the Fathers less than what they are. May God preserve Holy Orthodoxy from our innovations and theorizing. May the Orthodoxy we embrace be the one that teaches us the true path to salvation, that which has been handed down through the centuries.(oh wait, there I go being all dramatic again). You know what I mean.

Keep up the great work.

While we're at it, I'd like to hear our priests give more homilies in the vein of St. John Chrysostom or St. Gregory Palamas instead of working lots of jokes and pop culture references into them.

An attempted, amateur translation of the French:

'The reception of Byzantine Christianity for the Catholic Church presents a sort of anomaly. Invoking the authority of Thomas Aquinas, Western theologians generally reject the idea of a real distinction between the divine essence and energies, along with the whole notion of uncreated grace, which plays an essential role in the vision of Gregory Palamas (14th c.). On the other hand, many of these same theologians rediscovered recently the thought of Maximus the Confessor (7th c.), seeing in it a great precursor of Thomas Aquinas. But what is the teaching of Gregory Palamas without the legacy of Maximus the Confessor? How can we ignore the one and recognize the other on behalf of Thomas Aquinas? What comes to light here through the study of contexts and doctrinal issues, is the coexistence, previously unsuspected, of two distinct representations of the relationship between the created and the uncreated. The Latin West and Byzantine East...' Can't figure out the last sentence!