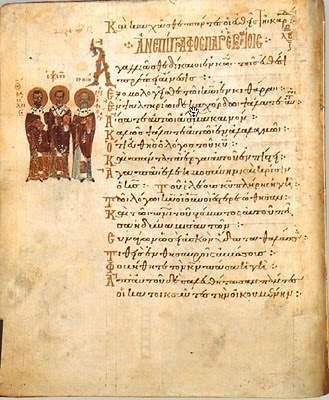 Although today is the Feast of the Three Hierarchs, patrons of students and learning, I do not intend to do a full post on them. I would instead refer the reader to my post of last year (here), and then expand just slightly on a point I made there.

At the end of last year’s post on the Three Hierarchs, I quoted Fr John Romanides complaining about the ‘particular form’ this feast ‘has taken in Greece, portraying the three hierarchs as a continuation of the great Hellenic spirit of ancient Greece’, rather than focusing precisely on their Christian character. [1] It is a point worth commenting on in light of my recent posts about the Fathers (including references to at least two of the Three) and secular learning.

First of all, I think Fr Romanides is quite right that it is the Christian character of the Three Hierarchs above all that we celebrate on their feast. This must never be neglected, and it is instructive to note that there is nary a reference to Greek culture in the Troparion of the Feast:

The three most great luminaries of the Three-Sun Divinity * have illumined all of the world with the rays of doctrines divine and true; * they are the sweetly-flowing rivers of wisdom, * who with godly knowledge * have watered all creation in clear and mighty streams: * The great and sacred Basil, and the Theologian, wise Gregory, * together with the renowned John, * the famed Chrysostom of golden speech. * Let us all who love their divinely-wise words * come together, honouring them with hymns; * for ceaselessly they offer entreaty for us to the Trinity. [2]

Second, while my experience of this is somewhat limited, I agree too that the particular form taken in turn by the portrayal of the Three among Greeks ‘as a continuation of the great Hellenic spirit of ancient Greece’ is inappropriate, founded as it seems to be on phyletism and on what I would call the Greeks ‘resting on their laurels’. Indeed, it’s almost as if, because the philhellenism which has so shaped modern Greek identity has traditionally originated in classicism, the only legitimacy the Fathers can have must be in terms of their continuity with the Classical Age.

I hesitate to emphasise Fr Romanides’s point too much, however, with English-speaking Orthodox, since we have no trouble discerning the Christian character of the Fathers but are instead rather more apt to miss precisely their continuity with the ancients. While not forgetting or negating Fr Romanides’s concern, I believe it is of unique importance to Greeks, and less to converts and other Orthodox in the West. As Stephen D. Salamone notes in his Introduction to Constantine Cavarnos’s elegant lectures on this continuity in the philosophical realm, ‘. . . Hellenic cultural history is very seldom understood in extenso.’ [3] Salamone continues:

In my opinion, Dr Cavarnos’ work is predicated upon the singular postulate that the true fruits of Hellenic civilization and culture are essentially ‘spiritual’. The intellectual and artistic achievements of Hellenism are expressions of this inner truth, which has been in a process of continuous metamorphosis since the earliest, in fact, pre-Socratic period of Greek history. It is this metamorphosis of Greek religion and its unique spirituality that has provided continuity to Greek culture, to Greek paideia in its most profound sense. It is this paideia upon which Hellenism as a living ethos rests; and it is Dr Cavarnos who has shown us how philosophically and significantly the humble prayers of ordinary Greeks, even today, express this age-old ethos. [4]

Of course, in saying this before a Western audience, I might also emphasise that the ‘Hellenism’ celebrated here is by no means a phyletistic phenomenon, but rather overlaps to a great degree with the ‘Romanity’ that Fr Romanides himself has championed. As Owen White insightfully observed in a comment on this blog (here):

I might only add . . . that it seems to me that much of the grecophilia we see in Greek Orthodox circles today is the offspring of festishising which occurred after the fall of Byzantium and often while under Islamic rule. There seems to be a distinct difference between the popular Greek Christian appreciation of Roman and Greek culture before the fall of Byzantium and that which we see after. I think some modern Greeks apply to their current fetishes certain anachronisms. To use a modern term, Byzantium was often far less ethnocentric than what we see in post Byzantine Greek culture. There seems to be a rather serious cultural break - a loss of a more cosmopolitan (and intellectual agrarian, as described by Victor Davis Hanson and others) and a more (to use the colloquial sense) catholic sensibility. Runciman seems to think so, and I wonder if the Greek Orthodox grecophilia we see today is actually a perversion of the authentic Greek Christian culture of Byzantium.

I think Owen is onto something here. It is only with the understanding that he is not speaking merely of an ethnos that we will see the truth of Fr Georges Florovsky’s words when the latter writes, ‘Theology can be catholic only in Hellenism.’ [5]

Apropos of today's feast, from what I know of St. John Mavropous (and I don't know much so I'm open to correction), he had a very Christian approach to secular leaning. His prayers are still in our prayer books today, but before he was Metropolitan, he was a court poet and philosopher, who loved Plutarch and Plato, and was the teacher of Micheal Psellus.

J. M. Hussey quotes the following poem in her book Church & Learning in the Byzantine Empire which I think is a nice poem on the proper perspective of books and learning:

"And thus, O Logos, mayest Thou guide and bear me, constant, unshaken, unmoved, remaining within the bounds of moderation, living among books like a bee among flowers, nourishing myself on words like a grasshopper in the dew, content to live only in the present, demanding nothing save salvation, to which mayest Thou, O Saviour, swiftly bring me, lest I grow very weary of the present. For the longed for haven far excels the easy labour of even a fair voyage, and is the consummation of all toils. May I quickly reach this, O my Christ."

Thank you for that, Matthew. Very nice!

First, let me say that the troparion for the feast of the Three Hierarchs you included is one of my favorite.

Second, right on. I think you hit the nail on the head here with this post. Being of the Greek Archdiocese of America, I see first hand this same mistaken identity that Greeks have when discussing these Fathers. The disconnect between the popular conception of the Three Hierarchs as being nothing more nor less than beacons of the greatness of Greece (i.e. classical learning), and the fact that they were astoundingly brilliant beacons of Christian Truth is truly lamentable. Yet, on the other hand, as you point out, we must not go too far in chastising this, because, in fact, they are also prime examples of what happens when the Church absorbs all that is good and beneficial from without and converts and transfigures it.

Remember that lecture by Met. Kallistos I mentioned not too long ago? It was the other night, and I posted my notes on my blog. This is exactly the topic he discussed, and I think you'll find it buttresses what you brought up here.

Thanks, Andreas. I'll be sure to check out your notes on +Kallistos's lecture.