'To the Knowledge of God He Reached'—St Peter Damascene 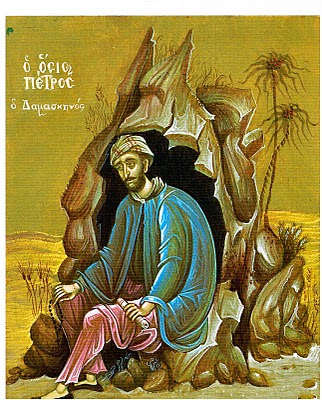 Today, 9 February, we celebrate the memory of St Peter Damascene (12th c.). Although St Peter tells us that he wrote primarily for his own benefit, [1] his writings were incorporated by St Nicodemus of the Holy Mountain and St Macarius of Corinth into the Philokalia, and, as the editors of the Faber edition of that work write, they ‘occupy more space in the Philokalia than those of any other author, with the one exception of St Maximos the Confessor.’ [2] St Nicodemus describes St Peter’s writings as ‘a treasury of divine knowledge and wisdom, . . . the recapitulation of sacred Watchfulness’, and ‘a circle within a circle, a concentrated philokalia within the greater philokalia’. [3] Here is the account of his life in the Prologue:

This saint is considered by some to have lived in the eighth century, and by others in the twelfth. This difference of opinion arises from there having been two Peters Damascene. The one about whom we are speaking was a great ascetic. Utterly selfless, he had not one single book of his own, but borrowed them to read. And he read untiringly, gathering wisdom as a bee does honey. He was at some time bishop in Damascus, but spoke out so strongly against Islam and the Manichean heresy that the Arabs cut out his tongue and sent him into exile deep in Arabia. But God gave him the power of speech, so that there in exile he preached the Gospel and brought many to the Christian faith. He wrote, and left to his descendants, a precious book on the spiritual life. He died a confessor and martyr and entered into the Kingdom of Christ. [4]

One of those who entirely conflate the two St Peters is St Nicodemus, in the introduction to St Peter’s writings in the Philokalia. [5] But Fr Placide (Deseille) notes, contra St Nicholas, that the bishop of Damascus who was exiled by the Muslims was also the eighth-century St Peter, [6] meaning of course that of the twelfth-century St Peter essentially almost nothing is known. This St Peter, sometimes called St Peter Damascene the Hesychast, is later than the late tenth century because he mentions by name St Symeon Metaphrastes (died c. 982), [7] and he is earlier than the thirteenth century because the earliest manuscript of his works dates to 1096-7. [8] Palmer et al. suggest that St Peter lived a semi-eremitic life in a kellion or skete, since he refers to this way of life as ‘the royal way’, [9] lacks books [10] and ‘says little about the social or communal aspects of the monastic vocation’ [11] but also refers to ‘the brethren’. Fr Demetrios Koutsouris gives a helpful summary of his life and work:

He was a monk, he lived in poverty, and he studied the divine and patristic texts, which were lent to him by other monks. He wrote two works . . . . His work covers all of the subjects of ascetic and neptic literature and were characterised as ‘a concentrated philokalia’ in the greater Philokalia. His teaching moves within the framework of Orthodox spirituality, which he himself practised in the state of hesychia in the desert. [12]

As all of the commentators on St Peter Damascene note, he himself points out that he did not own any books, but that he ‘borrowed them from devout friends, . . . ; and going through these books with great care out of love for God, I have then given them back to their owners.’ [13] He mentions having borrowed various books of the Bible, as well as many of the holy Fathers, and adds, ‘I went through all these slowly and diligently, trying to discover the root of man’s destruction and salvation, and which of his actions or practices does or does not bring him to salvation.’ [14] Indeed, St Peter is a very conscientious reader, and has many enlightening things to say about the practice of reading itself. He notes, ‘The sixth form of discipline consists in reading the writings and lives of the fathers, paying no attention to strange doctrines, or to other people, especially heretics.’ [15] But, having discoursed on the virtue of spiritual reading, St Peter cautions us:

It is true, however, that we cannot properly understand the full significance of what we read because of the darkness induced by the passions; our presumption often leads us astray, especially when we rely on the wisdom of this world which we think we possess, and do not realize that we need knowledge based on experience to understand these things, and that if we wish to attain knowledge of God mere reading or listening is not enough. [16]

Later on, too, St Peter writes:

The fathers, says the Gerontikon, kept the commandments; their successors wrote them down; but we have placed their books on the shelves. And even if we want to read them, we do not have the application to understand what is said and to put it into practice; we read them either as something incidental, or because we think that by reading them we are doing something great, thus growing full of pride. We do not realize that we incur greater condemnation if we do not put into practice what we read, as St John Chrysostom says. [17]

But St Peter is certainly not an obscurantist or anti-intellectual. In another passage he observes:

For through God’s providence our hands and fingers are apt for every skill and activity, whether writing or anything else. From Good, too, comes the knowledge of numberless arts and scripts, of healing and medicine, of languages and the various other branches of learning. In short, all things, whether past, present or future, have been and are always being given to us by God in His great goodness, so that our bodies may live and our souls may be saved, provided we use all these things according to His purpose, glorifying Him through them with all thankfulness. [18]

As evidence of his openness to learning, Constantine Cavarnos points out [19] the confirmation of Plato’s doctrine of the unity of the virtues in the ‘Introduction’ to St Peter’s first work: ‘From knowledge, or understanding, is born self-control and patient endurance. . . . Thus through self-control he practises the other virtues as well.’ [20] He also notes the agreement with Aristotle’s teaching ‘that moral virtue observes the mean between two extremes’: [21] ‘There is no shorter way to Christ—that is to say, to dispassion and the wisdom of the Spirit—than the royal way that avoids both excess and deficiency in all things . . .’ [22] Finally, St Peter himself acknowledges the insight of the philosophers:

As a final example of the teaching of St Peter Damascene, I bypass the deep and mystical passages on contemplation and prayer, and offer these encouraging words for us weak sinners struggling through Lent:

Even if you are not what you should be, you should not despair. It is bad enough that you have sinned; why in addition do you wrong God by regarding Him in your ignorance as powerless? Is He, who for your sake created the great univers that you behold, incapable of saving your soul? And if you say that this fact, as well as His incarnation, only makes your condemnation worse, then repent; and He will receive your repentance, as He accepted that of the prodigal son (cf. Luke 15:20) and the prostitute (cf. Luke 7:37-50). But if repentance is too much for you, and you sin out of habit even when you do not want to, show humility like the publican (cf. Luke 18:13): this is enough to ensure your salvation. For he who sins without repenting, yet does not despair, must of necessity regard himself as the lowest of creatures, and willnot dare to judge or censure anyone. Rather, he will marvel at God’s compassion, and will be full of gratitude towards his Benefacotr, and so may receive many other blessings as well. Even if he is subject to the devil in that he sins, yet from fear of God he disobeys the enemy when the latter tries to make him despair. Because of this he has his portion with God; for he is grateful, gives thanks, is patient, fears God, does not judge so that he may not be judged. . . .

If those attacked by many passions of soul and body endure patiently, do not out of negligence surrender their free will, and do not despair, they are saved. [24]

In conclusion, here is the ‘Hymn of Praise’ for St Peter Damascene from the Prologue, by St Nicholas (Velimirović):

Damascene numbers eight types of knowledge
for men of spiritual and divine background:

FIRST
The knowledge of sorrow and all temptations,

THIRD
The knowledge of horror, pain and fear,
Before death, in death and after separation,
when before the righteous judgement, the soul stands.

FOURTH
The knowledge of Christ, the Savior,
His life and all the saints;
Of the saints, their deeds, patience and words,
Which, like a silver bell resounds throughout the ages.

FIFTH
The knowledge of natural attributes;
Of physical phenomenon, variation and change.

SIXTH
The knowledge of forms and things,
Natural phantoms and all sensory beings.

SEVENTH
The knowledge of the world, rational and spiritual;
The angelic world and the world of Hades, both good and evil.

EIGHTH
The knowledge of God,
The One, Holy, Mighty and Immortal.
This knowledge is called Theology
To it, few are rarely elevated;
The greatest purity, a theologian needs
For the impure heart, to heaven does not reach,
Damascene, the seven elementary knowledges appropriates,
And to the eighth, to the knowledge of God he reached.
And the eighth is given by God and by God bestowed,
This is neither learned nor deserved.

Thanks for this! I enjoyed this post a lot and love the icon you have up of St. Peter Damascene. It's the first time I've ever seen an icon of this saint.

I'm glad you liked it, Mary. Thanks for stopping by!

In note 12 I mention the source of the icon--Giorgos Kordes. He's a very distinctive contemporary Greek iconographer. He did a series of all of the Fathers of the Philokalia, including several others whose icons I had never seen.

Thank You very much for this "refreshed data" about Saint Peter. I am now working Ph.D. at Orthodox Theology, related to Saint Peter of Damascus and Psychoterapy...