'Enlightening As Many People As Possible From All Nations'—St Macarius, Metropolitan of the Altai 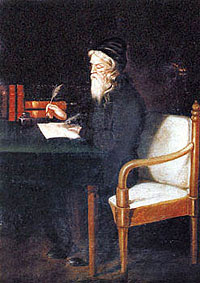 Today, 16 February on the Church’s calendar, we commemorate St Macarius (1835-1926), Metropolitan of Moscow and Apostle of the Altai (a region lying at the juncture of Siberia, Kazakhstan, and Mongolia, and an eponymous people who speak a group of dialects generally deemed Turkic). Today’s Saint was in fact the second St Macarius to serve as a missionary to the Altai, having joined the Altay Holy Mission some years after the repose of the original St Macarius, Apostle of the Altai (an archimandrite who lived from 1792 to 1847). Concerning his predecessor, Fr Florovsky has written, ‘The Altaic mission under his guidance is one of the most heroic and saintly episodes in our history’ (Fr Georges Florovsky, Ways of Russian Theology, Part I, trans. Robert L. Nichols [Belmont, MA: Nordland, 1979], p. 225). Both St Macariuses were apparently glorified at the massive glorification of the Imperial Martyrs and the New Martyrs and Confessors of Russia in Moscow on 7/20 August 2000 (‘We Are Once Again a People: The Consecration of Christ the Saviour Cathedral and the Glorification of the Royal Family and New Martyrs and Confessors of Russia’, Road to Emmaus Vol. 1, No. 3 [3], p. 56).

Unfortunately, while there are a few good accounts of our St Macarius in Russian (see here and here for example), there seems to be very little information on him in English. Actually, as the Wikipedia article seems to be the only source one can find late on a Saturday night, I give it in full and without shame:

Macarius II (Russian: Макарий) (October 1, 1835, Vladimir guberniya - March 2, 1926, Moscow guberniya) was the Metropolitan of Moscow and Kolomna from 1912 to 1917, an outstanding missionary and enlightener of the masses in the Altai region (people used to call him the ‘Siberian pillar of Orthodoxy’ and ‘Apostle of the Altai’).

Born to a family of a sexton, Macarius graduated from a theological seminary in Tobolsk (1854) and joined the Altai Holy Mission, which had been set up by the Holy Synod with the purpose of converting the people of the Altay region to Christianity.

In 1861, Macarius took monastic vows and was ordained a hieromonk (monastic priest). From 1861 to 1864, he was busy restoring the Chulyshmansky Monastery to a normal state. In 1868-1869, Macarius lived in Kazan and worked on the grammar of the Altai language, publishing a number of divine service books in this language. In 1883, he was appointed head of the Altai Holy Mission and raised to the dignity of archmandrite, and then consecrated as Bishop of Biysk and vicar of the Tomsk eparchy. In 1891, Macarius was named Bishop of Tomsk and Semipalatinsk. In 1905, he became the Bishop of Tomsk and Barnaul (later, archbishop). In 1908, Macarius was appointed Archbishop of Tomsk and Altay.

In 1912, he was summoned to Moscow by the Holy Synod and elected Metropolitan of Moscow and Kolomna, also becoming thereby a member of the Holy Governing Synod. In 1913, Macarius became an honorable member of the St Petersburg Theological Academy. On March 20 of 1917, he retired from his post and was sent to Nikolo-Ugreshsky Monastery. Three years later, Metropolitan Tikhon bestowed upon Macarius the honorable lifelong title of Metropolitan of the Altai. Macarius died in 1926.

In 1956, Macarius' remains (still incorrupt, some say) were transferred to Sergiyev Posad and placed under the Dormition Cathedral of the Trinity-St. Sergius Lavra.

I admit that St Macarius was new to me. I was not surprised finally to read of him, for I knew that there must have been thousands of Russians working in a similar capacity in the 19th century, both catechising and baptising indigenous peoples as well as producing high quality translations into their languages. But I was glad to discover a little bit about one of them.

While there is next to nothing in English about this St Macarius himself, there is an interesting record of the Altaic mission in the generation preceeding that of St Macarius: J.M. Neale’s Voices from the East: Documents On the Present State and Working of the Oriental Church (available here). Here is an interesting excerpt from Archpriest Landyscheff, at one time the director of the mission:

The heathens appear, at the commencement of efforts for their conversion, incapable (from their wretched intellectual development) of understanding the simplest words and the clearest truths of religion. After the enunciation of some maxim, when questioned regarding it, they reply only by a grunt. Patient and gradual teaching before Baptism wakes them by degrees from this mental stupor, developes and enlightens their intellect, the activity of which till then had been paralyzed. Then only, according to the measure of their natural capacity, they begin to seize the truths of the Gospel and the lessons of Christian morality.

After Baptism, the first impression which they feel, as they constantly assert, and as indeed the missionaries perceive, is the calm of conscience. They often say that, in their pagan condition, notwithstanding their barbarism, they were conscious of a sensation of shame whenever a Russian assisted at the ceremonies of their superstition or at an idol feast. As soon as they have received Baptism, they feel that they are on solid ground. Penetrated with the superiority of the belief which they have embraced, delivered from the terrible fear of the demons, who, according to their former idea, rejoiced in their misery here and hereafter, freed from the shameful obligation of a gross rite, the converts are filled with deep calm.

All of this can be seen as yet another manifestation of the Orthodox missionary spirit. It is something to which St John (Maximovich) the Wonderworker, among others alluding specifically to the elder St Macarius of the Altai, gave voice in his address at his consecration as Bishop of Shanghai (taken from here):

For this reason we must above all preserve among ourselves oneness of mind and unity, presenting a unified Russian Church, and at the same time continue her vital work among other peoples. From the very first centuries of Russia's acceptance of Christianity, she sent forth missionaries to distant parts. First to shine forth were the righteous Kuksha and Leonty of Rostov, afterwards Stephen of Perm, Innocent of Irkutsk, and in our time Macarius—Apostle to the Altai, and Nicholas of Japan. Now the scattered Russian people have come to spread the Faith in all corners of the world. The task of the Russian Church Outside Russia is to occupy herself with the work of enlightening as many people as possible from all nations. It is for this purpose that the Synod of Russian Hierarchs Outside Russia is sending me to a country from which rises the material sun, but which is in need of the illuminating rays of the spiritual Sun of Righteousness.