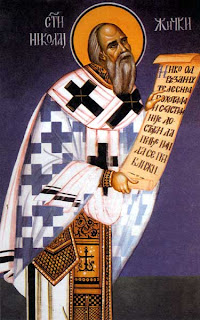 Today, 5 March on the Church’s calendar, we celebrate the memory of St Nicholas (Velimirović) of Ohrid and Zhicha (1880-1956). One can read a good longer Life of St Nicholas here and here, as well as a briefer one here and here. St John (Maximovich) the Wonderworker of Shanghai and San Francisco has called him ‘a great saint and Chrysostom of our day [whose] significance for Orthodoxy in our time can be compared only with that of Metropolitan Anthony [Khrapovitsky]. . . . They were both universal teachers of the Orthodox Church’ (qtd. here). St John has also written (qtd. in the same source):

The young Velimirovich, while growing in body, grew all the more in spirit. As a sponge soaks up water, so he absorbed learning. Not only one but many schools had him as their pupil and auditor. Serbia, Russia, England, France and Switzerland [where he wrote a doctoral dissertation on the philosophy of Berkeley!] saw him in their lands as a bee collecting nectar. He not only strove to learn much, he also strove to acquire Truth. Firm in the Orthodox faith, he sought to obtain even with his mind that which faith gives. He did not doubt in the truth of faith; rather, he longed to sanctify his intellect with the Truth, and to serve the Truth with his mind, heart, and will. He developed his mind such that with its fruits he nourished not only himself but others as well. As much as he grew in knowledge, so he grew in spirit. . . . Constantly pondering the ultimate questions, he gathered wisdom from everywhere—from learning, from nature, from the happenings of everyday life. Most of all he enlightened his soul with the Divine light, nourishing it with the Holy Scriptures and prayer.

Besides studying the usual subjects, Nikola began reading the significant texts of the most famous writers of western and eastern European culture: Shakespeare, Voltaire, Nietzsche, Marx, Pushkin, Tolstoy, Dostoevsky, and others. . . . [Later] He even became knowledgeable in the spiritual and philosophical books of ancient India. This learning made Nikola into a ‘Renaissance man’, whose erudition and profundity of thought were considered by everyone as both a wellspring of knowledge and a unique treasury of wisdom and spirituality.

In the classic 1941 account of her travels in Yugoslavia, Black Lamb and Grey Falcon: A Journey Through Yugoslavia (NY: Viking, 1943), pp. 720-1, Dame Rebecca West painted a memorable portrait of a St Nicholas. Describing him in literally 'Jovial' terms (almost reminiscent of The Lion, the Witch, & the Wardrobe!) West writes:

He struck me now, as when I had seen him for the first time in the previous year, as the most remarkable human being I have ever met, not because he was wise or good, for I have still no idea to what degree he is either, but because he was the supreme magician. He had command over the means of making magic, in his great personal beauty, which was of the lion’s kind, and in the thundering murmur of his voice, which by its double quality, grand and yet guttural, suggests that he could speak to gods and men and beasts. He had full knowledge of what comfort men seek in magic, and how they long to learn that defeat is not defeat and that love is serviceable. He had a warm knowledge of how magic can prove this up to the hilt. He had a cold knowledge, which he would not share with any living thing, of the limited avail of magic, and how its victories cannot be won on the material battlefield where man longs to see them. He was so apt for magic that had it not existed he could have invented it. He saw all earth as its expression.

Fortunately, however, we do not have to rely solely on the words of others to catch a glimpse of this great man. He has left us his own voluminous writings, and it is to these that I wish primarily to turn. One of St Nikolai’s most beautiful books is a collection of one hundred prose poems modeled on the Psalms called Prayers by the Lake, trans. Archimandrite Todor Mika and Fr Stevan Scott (Grayslake, IL: Free Serbian Orthodox Diocese of the USA and Canada, n.d.), written at Lake Ohrid in 1921-22. One can read one of the most famous and beloved of these, LXXV, here, and a few others here, here, here, and here. Obviously, there are many treasures in this book, and I intend to post another later, but for now I shall begin with XXIV (from pp. 42-3):

You stroll through fields of flowers without being heard, and You sprinkle the flowers with Your grace, so that the blood of the earth may not look through, but the beauty of God. Sprinkle the field of my soul with Your grace also, so that it may not be said that the field of my soul sprouted from the blood of the earth, but that it is adorned with the beauty of God.

You mingle with every heap of ashes and pour in life. Pour life into the ashes of my body also, so that I may live and glorify Your works.

You are kind to the animals in the woods. Show kindness to me also, who am animalized by ignorance.

You fertilize every seed of life. You hover in every womb. You sit in the egg of a bird’s nest and masterfully form a new miracle of life. Fertilize, I beseech You, the invisible seed of goodness within me also, and keep watch over it until it reaches maturity.

O Awesome and Almighty Spirit, by Your presence You turn a den of thieves into a haven of Heaven, and a terrifying universe into a temple of God. Descend into me also, I beseech You, and turn a handful of ashes into what You know how to do and can.

Finally, this blog is greatly indebted to St Nicholas for one of the greatest of his many writings, The Prologue from Ochrid, a wonderful compilation of brief Saints’ Lives based on the Holy Tradition of the Orthodox Church, as well as meditations, original ‘hymns’, and homilies (available here, on the website of the Western American Diocese of the Serbian Orthodox Church; there are a few others online here). Here is one of the wonderful homilies (for 25 July) from the Prologue, which I’ve taken from Prologue from Ochrid, Vol. 3, trans. Mother Maria (Birmingham: Lazarica, 1986), pp. 108-9:

—on slaves who preach freedom.

‘...and promise them liberty, while they themselves are the servants of corruption; for of whom a man is overcome, of that same he is brought in bondage’ (II Pet. 2:19).

The Apostle is still speaking of the ‘waterless wells, of ill-repute and self-willed’, reminding the faithful to keep themselves from their enticement of ‘proud and lying words’. He said first about them that they ‘speak against the glory of God’; secondly, that they ‘delude by the uncleanness of fleshly lusts’; and now he speaks of their promise of freedom--a promise that is not only not theirs to make, lacking it themselves, but one that overwhelms by foul passions those that are slaves to their passions, obedient slaves to the most wrathful tyrants of this world. Oh, my brethren, how apt to us today are these apostolic words, written more than nineteen hundred years ago! Look how, everywhere around us, men with foaming mouths declaim about freedom, having no freedom of any sort! Listen to the cries of despairing slaves of the passions and vices, how the deluded delude and the blind preach light! The passions are a net woven by the devil, with which he hunts men. Caught in this net, they call others slaves and themselves free, to the amusement of the devil, who silently gathers in the net and draws it to his shore. Oh, my brethren, keep yourselves from these messengers of despair, who call themselves messengers of freedom, serving their lord the devil day and night. They call their poverty richness, and the richness of others they call poverty, as fools the world over call others fools and themselves wise. So they, the least free, call others enslaved, and they call the service of God and one’s neighbour—this service performed from love—they call this slavery, while calling the service of the devil freedom. They are malicious towards both God and man, as the devil himself is malicious towards both God and man. Whenever you hear someone speak to you of freedom, examine carefully first of all if he is not a slave to some passion or vice. You will know all false teachers of freedom by their impure lives, their ill-repute and their self-will. This is what the Apostle is bringing to your mind.

O Lord, the only Giver of true freedom, keep us from the net of all who are malicious towards Thee and us. To Thee be glory and praise for ever. Amen.