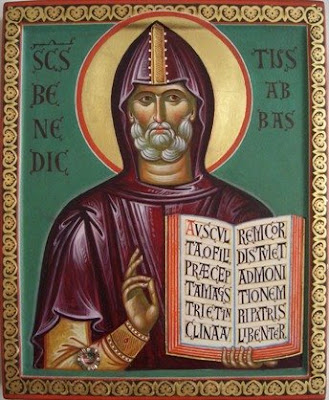 Continued from here:
St Benedict does not elabourate on his prescription of reading in RB 49, for he already spoke of it at some length in RB 48. There it became clear that lectio divina is to be an important part of the Lenten regimen in the monastery. I shall give the first lines of the chapter, followed by the lines that specifically refer to this regimen. This is taken from The Rule of St Benedict in Latin and English, trans. Abbot Justin McCann, OSB (Fort Collins, CO: Roman Catholic, n.d.), pp. 111, 113, with the ‘verse’ numbers added for easy reference:

1 Idleness is the enemy of the soul. The brethren, therefore, must be occupied at stated hours in manual labour, and again at other hours in sacred reading [in lectione divina]. . . .

14 In the days of Lent let them apply themselves to their reading from the morning until the end of the third hour, and from then until the end of the tenth hour let them perform the work that is assigned to them. 15 In these days of Lent let them each receive a book from the library, which they shall read through consecutively; 16 let these books be given out at the beginning of Lent. . . .

The first thing that the infallible Adalbert de Vogüé notes about this passage is that the placing of lectio divina at the beginning of the day ‘is a tribute paid to its spiritual dignity’ (238). He observes that St Hippolytus among others, in The Apostolic Tradition, pays a similar tribute (from Kevin Edgecomb’s highly readable translation):

41:1 Let every faithful man and every faithful woman, when they rise from sleep at dawn, before they undertake any work, wash their hands and pray to God. Then they may go to work. 2 But if there is some instruction in the Word, they shall go there, considering that it is God whom they hear in the one instructing. For having prayed in the assembly, they will be able to avoid all the evils of the day. The pious should consider it a great wrong if they do not go to the place in which they give instruction, especially if they know how to read. . . . 4 If there is a day when there is no instruction, let each one at home take a holy book and read enough of it to gain an advantage from it.

According to Egeria (Itinerarium VI.2-3), c. 380, it was also the custom at Jerusalem during Lent for the bishop to catechise candidates for Baptism in the Scriptures and the Creed for three hours each morning, and the faithful as well would often attend these catecheses, ‘the Holy City’s annual reorientation workshop’ (de Vogüé, p. 239). De Vogüé views St Benedict’s prescription of three hours of reading during Lent (RB 48:14) in direct continuity with this tradition. The monks spend every morning year-round in reading the Scriptures, since ‘The life of a monk ought at all times to be lenten in its character’ (RB 49:1), but during the rest of the year this only occupies two hours, for ‘few have the strength for that [longer regime]’ (ibid.). De Vogüé notes:

The Bible makes dry reading. Remaining face to face with it for three hours presupposes generosity. And we are in fact dealing with the Bible: it alone properly deserves the name ‘divine reading’ (lectio divina) which Benedict used at the beginning of the chapter, and the ‘library’ mentioned here is made up essentially of biblical books, with commentaries on them by the Fathers (cf. RB 9:8) [I should note that elsewhere de Vogüé denounces ‘superficial, distracting, and worldly readings’ like those sometimes advocated in modern RC religious orders—The Rule of St Benedict: A Doctrinal and Spiritual Commentary, trans. John Baptist Hasbrouck (Kalamazoo, MI: Cistercian, 1983), p. 246].

But de Vogüé considers this reading a necessary fuel for the pursuit of unceasing prayer. Noting the obligation of ‘combining prayer with manual activity’, he continues:

Human prayer, however, is a response to the word of God. In order to speak to God without ceasing, we must first of all listen to him without ceasing. Hence the necessity of reading and learning Scripture by heart. The continual prayer which accompanies work implies times when the monk does not work, but reads and memorizes the Bible. Knowledge of the sacred text acquired during the three daily hours of reading allows the worker to repeat it through throughout the day, and thus to listen constantly to God, answering him with brief prayers. (Reading, p. 236)

It is a practice that Douglas Burton-Christie has noted at work in the Gerontikon, where this repetition of the Scriptures is referred to as ἡ μελέτη, ‘meditation’. According to Burton-Christie (The Word in the Desert: Scripture and the Quest for Holiness in Early Christian Monasticism [NY: Oxford U, 1993], p. ):

Meditation was not, as the word has come to imply today, an interior reflection on the meaning of certain words. It was first and foremost the utterance, or exclamation of words, which were gradually digested and interiorized. Meditation on Scripture was an oral phenomenon.

Indeed, this oral repetition of the Scriptures seems to have been used in much the same way that we see the Jesus Prayer recommended later. Burton-Christie cites the example of St Macarius the Great, who counseled a brother to ‘meditate on the Gospel and the other Scriptures, and if an alien thought arises within you, never look at it but always look upwards, and the Lord will come at once to your help’ (Macarius 3; Benedicta Ward, trans., The Sayings of the Desert Fathers: The Alphabetical Collection, rev. ed. [Kalamazoo, MI: Cistercian, 1984], p. 127; cited in Burton-Christie, p. 125).

It is a simple matter to follow this practice, as Burton-Christie does (p. 128), to the famous passage from St Cassian’s Conferences (X.x.1-xi.6) where Abba Isaac prescribes the repetition of a particular verse from the Scriptures (Ps. 69:1 LXX) as a means of fulfilling the Apostle Paul’s injunction to ‘pray without ceasing’ (I Thess. 5:17). Speaking of this verse, Abba Isaac tells Ss Cassian and Germanus (St John Cassian, The Conferences, trans. Boniface Ramsey [NY: Newman, 1997], p. 379):

Every monk who longs for the continual awareness of God should be in the habit of meditating on it ceaslessly in his heart, after having driven out every kind of thought, because he will be unable to hold fast to it in any other way than by being freed from all bodily cares and concerns.

Of course, as our infallible commentator has noted (here as well as in Reading, 133-4), the particular verse recommended so strongly by Abba Isaac is only mentioned in St Benedict’s Rule in its liturgical rôle (RB 18:1), and the latter does not appear to have taken him up on his suggestion of using it in order to pray without ceasing. Furthermore, de Vogüé points out that St Benedict only uses the words meditari and meditatio to refer to the memorisation of the Scriptures during times of leisurely reading, and does not seem to speak explicitly of the kind of rumination that we are concerned with here.

Nevertheless, de Vogüé is certain that St Benedict had not ‘relinquished the traditional exercise of “meditation” during work’, saying ‘[St] Benedict’s silence can only be an accident’ and that his specific use of the term was only part of a general trend (Rule, p. 247). He concludes, ‘The absence of all allusion to meditation upon Scripture during work is one of the points where we feel most keenly the need to clarify and complete our Rule with the data collected from monastic tradition’ (Rule, p. 247). It seems to me that this is perhaps the most fruitful and enlightening way for those of us more acquainted with the Eastern tradition—and particularly its emphasis on the Jesus Prayer as a path to prayer of the heart—to begin to approach the Rule from our own perspective, and it’s certainly one of the most exciting aspects of de Vogüé’s work, in my humble opinion.
Posted by Aaron Taylor at 2:30 PM

Good post Aaron! Thanks for puting me in your blog links. Have done same.
Kind Regards
Artyom

Your welcome, Artyom! It's nice to be able to keep up with jurisdictional goings-on without belonging to an e-mail list or something, and to follow the breakaway Russian groups without getting too close. I commend you for an excellent idea! And thanks for your kind comment about the post. This is a matter of great interest to me, and the blog is almost my only way to share it right now.