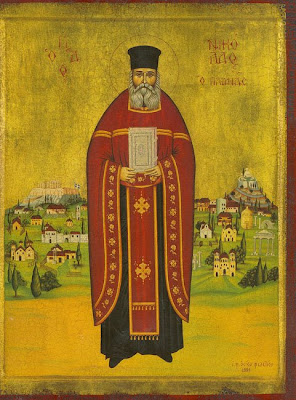 Today, 17 February on the Church’s calendar, we commemorate St Nicholas Planas, the simple priest of Athens who served the Divine Liturgy daily for 50 years. Although his parish began with only eight families, he inspired and attracted others to him with his childlike simplicity and faith and his zeal for the liturgical cycle of the Church, for as the publisher, Alexander Papademetriou, has written, ‘sanctity has never ceased to attract, to captivate, and to guide the Church’s faithful children in Her true path’ (‘Prologue of the Publishers of the Greek Edition’, Papa-Nicholas Planas (1851-1932): The Simple Shepherd of the Simple Sheep, by Nun Martha, trans. Holy Transfiguration Monastery [Boston: Holy Transfiguration Monastery, 1981], p. xix). Indeed, in the case of St Nicholas, Papademetriou continues on the same page:

It can be said that, in our cold and ungrateful times, the service-loving synodia of vigil-keepers of Papa-Nicholas Planas—from Alexander Papadiamantis, Alexander Moraitides, and Father Philotheos Zervakos, to the women, who though little-educated, were yet pious and zealously dedicated to the traditions of the Church—were by the good will and blessing of God, a continuation of the Kollyvades.

In his ‘Foreword’ to the book, the ever-memorable Photios Kontoglou also refers to the beautiful relationship between St Nicholas and this synodia (p. xxviii):

He considered his synodia as his children, the sons and daughters of Christ, a blessed fellowship which had in its midst the innocent Elder as guide—the good shepherd, who guided his flock to the good and refreshing pastures of the Orthodox Faith. The entire care and concern of the Elder was the salvation of the flock. He felt pain for them, since he was not the hireling who abandons the flock and leaves (cf. John 10:13).

Anyway, I thought that rather than trying to give an overview of St Nicholas’s life, which would be rather an imposition upon the material in this book by Sr Martha, I would simply give my own favourite episode, which is number 42, ‘The tamed beast’, on p. 48:

At the family’s where Father often went, their space inside the courtyard had been rented by a certain cobbler who was a mainstay of the Communist party. The hatred which he felt toward all, and especially toward priests, knew no bounds. There, while he worked, he would talk to himself, raving about where his comrades would begin slaughtering the priests. And he would say, ‘First of all, we’ll slaughter the priests of the Life-giving Spring.’ And he would go on dealing in turn with the others also. As I said, he worked inside the court. Father, in his kindness went up to him and said, ‘Good evening, my child.’ Without lifting his head from his work, he mumbled something.

On the third visit, Father said to him again, ‘Good evening, my Luke; how are you doing, my child?’ He deigned to say, ‘Well, Father.’

Father would visit him continuously there where he worked, until the ice was broken. He got up from his work, he kisssed his hand with reverence, and he told us, ‘When they kill the priests, I will tell them not to kill Papa-Nicholas. And not only will I say it, but I will defend him.’ Afterwards, whenever Father used to come, he would hasten to meet him and kiss his hand. Father neither knew his inclinations, nor did he have any conception of communism, nor did he notice his transformation—we supposed. Who knows how he saw with the clairvoyance of his soul? Well, no matter how many sermons that Communist might have heard, no matter how many admonitions they might have given him, none of these would have been able to have any influence on his hardened soul as the goodness of this white-haired little old man, who used to pay him a standing visit each time—indifferent as to whether he had been scorned at the beginning. With Father’s little greetings and good wishes he repented. And when a short time afterwards he fell ill from a disease (paralysis of the lower extremities of his legs) and died at the age of thirty years, he reposed as a good Christian and . . . without having killed anyone. Such was the influence that the personality of Father had on all who knew him. Because of this, he had no one as his enemy. Only Satan, but even him he would bring to nought with the grace of the Holy Spirit, who had come to dwell in his soul.

There was a good article on St Nicholas in Orthodox America; it is available here. But one really ought to read Sr Martha's book, for as Kontoglou writes, 'this book also is restful and peaceful, because it was written by a soul who, though simple, yet is full of that humble wisdom which is granted by God to those who love Him above all things' (p. xxii).
Posted by Aaron Taylor at 10:16 AM

I love St Papa Nicholas! He may be the first modern Greek saint who I'd ever heard of. Though I was raised Roman Catholic, the name "Papa Planas" resonates from childhood as the name of a saint. God knows how that happened. We did know some few Greeks while I was growing up, so it must've come from them.

Photios Kontoglou was also a psaltes and reader for Papa Planas.

One of the many beautiful things about Saint Papa Planas is that he would every day read through the names of all the departed Christians that had ever been given to him for commemoration during Proskomidi. This would take about two hours by the time of his repose. It was another of the things that drew the people to him.

And he is a great lesson to all of us: it is the simple, not the wise, who succeed in the struggles in this world and in drawing the indifferent, distracted, and forgetful people of our age back to their Creator.

Holy Transfiguration Monastery has a beautiful (all their books are beautiful, it seems) little paperback on Papa Nicholas Planas.

Pray for us all Holy Papa Nicholas!

I must have an earlier edition of the one on the HTM site. It looks like it has the same content, but the cover has a tiny little line drawing of St Nicholas instead of a large, full-colour icon.

More like the Cavarnos books, then. Those have also changed, with volume 15 on St Athanasios Paros, to a full color, less-thick cover. I prefer the old style, but, you know, thankfully (non-ironically) plus ça change..., the insides are still beautiful. The consistent quality of Dr Cavarnos' writing is the best part of it all.

It's true. Did you ever read Meetings With Kontoglou?