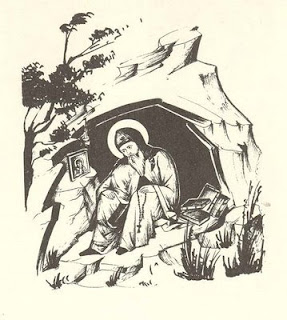 Today, 22 February on the Church’s calendar, we commemorate the Holy Thallasius, Limnaeus, and John (5th century), hermits of Syria. Although the third, St John, is not mentioned there, there is a good account of them in Bulgakov’s Handbook. But happily, we possess a good primary source in the Religious History of Theodoret of Cyrrhus (A History of the Monks of Syria, trans. R.M. Price [Kalamazoo, MI: Cistercian, 1985], pp. 150-3), who knew all three personally.

St Thalassius was the eldest of the three, and seems to have been of a generation somewhat older than that of Theodoret, who calls him ‘a man adorned with many other good qualities, but surpassing the men of his time in simplicity of character, gentlenesss, and modesty of spirit’ (p. 150). St Thalassius had a cell on a hill near the village of Tillima, where Theodoret says that he visited him.

St Limnaeus was a disciple of St Thalassius. According to Theodoret, ‘At a very young age he entered this wrestling-school and received a fine education in this consummate philosophy’, where he ‘received sufficiently the teaching of the godly old man and made himself an impress of his virtue’ (p. 150). Theodoret speaks warmly of frequent visits to the anchorite. He notes St Limnaeus’s strict rule of silence as a young monk, his extreme seclusion, his love for life under the open sky, and his capacity to endure illness and infirmity with faith in God, receiving ‘treatment by prayer and the sign of the cross’, easing ‘his pains by the spell of the divine name’ (p. 151).

Of course, it should be noted that while there are certainly examples of Saints living in this way, it is not recommended as a rule to the average believer. As Elder Joseph the Hesychast has written, ‘I am just a poor ascetic who has grown old in the wilderness, and I wanted to heal only through faith. But now I, too, am learning that both medicines and grace are necessary. So now I shall say like the saint [Nektarios], “See to it that you get well”’ (49th Letter; ET in Monastic Wisdom: The Letters of Elder Joseph the Hesychast [Florence, AZ: St Anthony’s Greek Orthodox Monastery, 1998], p. 244).

Theodoret tells us that, apart from the kindness with which he received visitors, St Limnaeus built cells for a group of blind beggars, and exhorted them to spend their time in psalmody, the elder himself providing for their needs from the generosity of his grateful visitors from the world. According to Theodoret, ‘It is possible to hear them hymning the Master continually; and he continues to show such humanity towards his fellow-men’ (p. 152).

Finally, Theodoret tells us, ‘John too has keenly embraced this mode of life, a man conspicuous, in addition to other virtues, for gentleness and kindness’ (p. 152). Theodoret describes his ascetic struggles saying, ‘He is so raised above all human things that he reaps no comfort from them’ (p. 152). Speaking of all of these men, he writes:

They have the same dress, food, standing posture, prayer, labors all night and all day; neither length of time nor old age nor physical weakness overcome their endurance, but they preserve in themselves love of labor in full bloom. God, the Umpire of virtue, has very many other contestants in our mountains and plains; it would not be easy merely to number them, let alone record the life of each one. (pp. 152-3)

Glory to God that He has revealed as many as He has!
Posted by Aaron Taylor at 1:22 PM