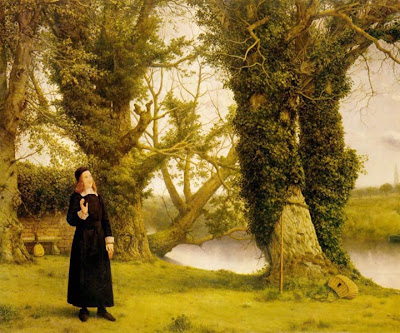 The ever-tasteful Kevin Edgecomb recently posted a piece by the English clergyman and Christian poet, George Herbert (1593-1633). I, for my part, duly approved and noted to myself that I ought to follow suit. So here it is, and appropriate to the season as well (I have copied this version from here, since my own edition of Herbert, the Everyman’s Library, is sadly in modernised spelling—The Complete English Works, ed. Ann Pasternak Slater [NY: Knopf, 1995]):

Welcome deare feast of Lent: who loves not thee,
He loves not Temperance, or Authoritie,
But is compos’d of passion.
The Scriptures bid us fast; the Church sayes, now:
Give to thy Mother, what thou wouldst allow
To ev’ry Corporation.

The humble soul compos’d of love and fear
Begins at home, and layes the burden there,
When doctrines disagree.
He sayes, in things which use hath justly got,
I am a scandall to the Church, and not
The Church is so to me.

True Christians should be glad of an occasion
To use their temperance, seeking no evasion,
When good is seasonable;
Unlesse Authoritie, which should increase
The obligation in us, make it lesse,
And Power it self disable.

Besides the cleannesse of sweet abstinence,
Quick thoughts and motions at a small expense,
A face not fearing light:
Whereas in fulnesse there are sluttish fumes,
Sowre exhalations, and dishonest rheumes,
Revenging the delight.

Then those same pendant profits, which the spring
And Easter intimate, enlarge the thing,
And goodnesse of the deed.
Neither ought other mens abuse of Lent
Spoil the good use; lest by that argument
We forfeit all our Creed.

It’s true, we cannot reach Christ’s fortieth day;
Yet to go part of that religious way,
Is better than to rest:
We cannot reach our Savior’s purity;
Yet are bid, Be holy ev’n as he.
In both let’s do our best.

Who goeth in the way which Christ hath gone,
Is much more sure to meet with him, than one
That travelleth by-ways:
Perhaps my God, though he be far before,
May turn, and take me by the hand, and more
May strengthen my decays.

Yet Lord instruct us to improve our fast
By starving sin and taking such repast
As may our faults control:
That ev’ry man may revel at his door,
Not in his parlor; banqueting the poor,
And among those his soul.

Interestingly, there is a book on Herbert by the late (I believe) Mother Thekla of the former Dormition Monastery in Yorkshire called George Herbert: Idea and Image (Buckinghamshire, UK: Greek Orthodox Monastery of the Assumption, 1974). Unfortunately, I have not read it and have yet to actually see a copy, but there is a detailed description of it in John R. Roberts’s George Herbert: An Annotated Bibliography of Modern Criticism, 1905-1974 (Columbia, MO: U of Missouri, 1978), pp. 261-2. Here is the beginning of Roberts’s description:

Detailed discussion of the theological and spiritual dimensions of Herbert’s poetry. Sees a double, simultaneous movement in The Temple and suggests that, although on one level The Temple can be seen as an exposition of Anglican theology and dogma in verse, on another level it is a record of Herbert’s own mystical thinking: ‘It is this double movement which I have tried to lean towards in my exploration of The Temple, that is, the reality of Herbert’s allegiance to his Church, the Church of England, on earth, with all the consequences, and, then, the reality of the love which can not be contained in the Church on earth, or indeed within the confines of the created world’ (p. 14). (Roberts, p. 261)

Fr Ephrem (Lash) told me the sad story of Mother Thekla’s monastery and its eventual demise over drinks at the Mitre, though I’m a bit fuzzy on the details now. But one can get some idea of where things were headed in this fascinating article from The Guardian. Mother Hilda sums up an important problem:

She believes that one of the reasons fewer women choose to enrol is a growing inability to sustain an ‘inner life’. ‘We have been robbed of our inner resources; elevator music is all around,’ she says. ‘All the silences are covered. These days it is considered cruel to have a quiet classroom for children.’
Is there too much instant gratification? She nods vigorously. She says that the women who came to the monastery but did not stay, did not ‘know what to do sitting in a room by themselves’.

May we use this Lenten season to 'uncover the silences' and figure out 'what to do sitting in a room by ourselves'.
The painting at the top is ‘George Herbert at Bemberton’ (1851) by William Bryce.
Posted by Aaron Taylor at 9:14 AM

Ah! Always the ending zinger from George: ...banqueting the poor,
And among those his soul.

Is this the same Mother Thekla who was dealing with John Taverner? She seems to draw the guru-seeking crowd, which must be quite distressing.

On the "ever-tasteful Kevin", I'll only say you may have your doubts upon seeing my Aloha shirts, which are, as they ought to be, vividly, shockingly colorful!

Unless I'm much mistaken, this IS the same Mother Thekla.

It’s true, we cannot reach Christ’s fortieth day;
Yet to go part of that religious way,
Is better than to rest:

As someone who often stumbles, Amen and thank you George Herbert.

And thank you for sharing this; I was really only familiar with his wonderful piece Let All the World in Every Corner Sing.