'The Powerful Roar of a Lion Sounding from Rome'—St Leo the Great, Pope of Rome 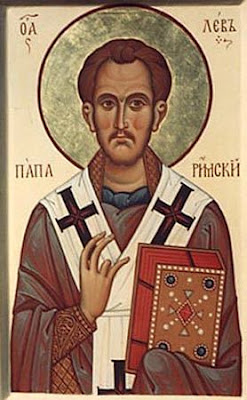 When Attila drew near to Rome with his Huns and prepared to ravage and burn the city, Leo went out to him in his episcopal vestments, tamed the wrath of the Hun leader and averted the fall of Rome. Attila was willing to be guided by Leo both because of his holiness and because of a vision he had of the Apostles Peter and Paul, standing behind Leo and threatening Attila with a flaming sword.

Of course, St Leo is primarily known for his zealous opposition to heresy, culminating in the writing of his famous Tome (said to have been placed on St Peter’s tomb and corrected by the Apostle—Prologue, p. 185), which formed the standard for Orthodoxy at the Œcumenical Council of Chalcedon. According to Jaroslav Pelikan (The Spirit of Eastern Christendom (600-1700), Vol. 2 of The Christian Tradition: A History of the Development of Doctrine [Chicago: U of Chicago, 1974], pp. 148-9):

The fathers assembled at the council exclaimed: ‘Peter has spoken through the mouth of Leo!’ In the period with which we are dealing in this volume, East and West agreed that Leo had indeed been the spokesman for Peter and for the Holy Spirit at Chalcedon. ‘The divinely given and divinely inspired epistle of the great and brilliant and divinely minded Leo, of the most holy church of the Romans’ was, according to Sophronius of Jerusalem, sacred and worthy of honor as a ‘producer of orthodoxy’. The Council of Constantinople of 681 declared that ‘the letter of Leo [the Tome to Flavian], like the powerful [ῥωμαλέον] roar of a lion sounding from Rome’, had frightened away the hunters.

St Leo is renowned for his Lenten homilies—which we have already had occasion to mention (here and here)—and so it is particularly appropriate that his feast has fallen today this year, the second day of Great Lent. Here, for instance, is Chapt. VI from St Leo’s Fourth Homily, ‘On Lent’:

Being therefore, dearly-beloved, fully instructed by these admonitions of ours, which we have often repeated in your ears in protest against abominable error, enter upon the holy days of Lent with Godly devoutness, and prepare yourselves to win God’s mercy by your own works of mercy. Quench your anger, wipe out enmities, cherish unity, and vie with one another in the offices of true humility. Rule your slaves and those who are put under you with fairness, let none of them be tortured by imprisonment or chains. Forego vengeance, forgive offences: exchange severity for gentleness, indignation for meekness, discord for peace. Let all men find us self-restrained, peaceable, kind: that our fastings may be acceptable to God. For in a word to Him we offer the sacrifice of true abstinence and true Godliness, when we keep ourselves from all evil: the Almighty God helping us through all, to Whom with the Son and Holy Spirit belongs one Godhead and one Majesty, for ever and ever. Amen.

Kontakion. Third Tone
On this day the Virgin

Seated on the priestly throne, O great and glorious Leo, with the Holy Trinity’s inspired and God-given doctrines thou didst stop the gaping mouths of spiritual lions and didst shine upon thy flock the light of God-knowledge, and art glorified now as a divine initiate of the sublime grace of God.