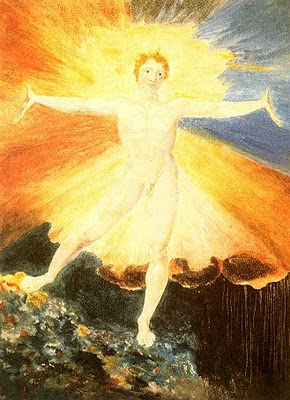 Well, yesterday was the Sunday of St Mary of Egypt, which means the big day has arrived! It is time to announce the winner of the first-ever Logismoi book giveaway contest! Participation was not as good as I’d hoped, but there were some strong entries which actually exceeded my expectations (Jonathan Barker actually withdrew his entry when he saw some of the others!). I shall name the winner, and then explain how I went about judging (just know that any protests are at this point entirely ineffectual!), posting all of the entries beginning with the winner, and continuing in the order in which I discuss them. So without further ado, the winner is:

The good minor cleric has submitted an entry which most closely matches what I was looking for. His argument is abstruse and his conclusion humourous. There is absolutely no way that Blake intended Albion’s error to be dry humour, and yet it fits the bill. Kudos, Subdeacon Lucas!

Blake himself has cryptically supplied the answer to the question of Albion’s error in acrostic fashion within his verses. The beginning of each line spells: T-O-R-R-T-H-J-B.

Now, we understand that in Greek, ‘H’ is an eta, usually transcribed as an ‘I’, and ‘B’ is pronounced as a ‘V’; we come to the following:

‘TORRTIV’ (recall, that the Germans have caused no end of grief with transcribing ‘I’s as ‘J’s for which we have ‘J’erusalem and ‘J’acob in English. therefore, the J more properly elides into the ‘I’)

‘Torr’ is Swedish for ‘dry’, and the clear reason for his use of Swedish here is because of his connection to the work of Emanuel Swedenborg.

The second word, ‘Tiv’, is Romanian for ‘hem’. (The connection here is Romania’s inclusion of Blake on one of their stamps). ‘Hem’ is homophonic with the sound made when politely clearing one’s throat after hearing a particularly bad joke, which leads us to Blake’s own answer to the question of Albion’s (England’s) Error:

Ivan Tarter was probably the 1st runnner-up on the criterion of conformity to my assignment. I also really like the pretense of consulting manuscripts. But his entry lacked the directness and firm conclusion of the winning entry. Sorry, Ivan! You can always borrow the hardcover edition from me….

After much consultation of all the primary manuscripts and extensive parlay with the world’s most prestigious scholars of eighteenth century English literature (and in particular, the Blake scholars), I have concluded the following:

Albion is fictional English fellow who has journeyed to Ulro, the mythical ‘land of clowns’ (cf. co-ulrophobia, fear of clowns). The modern circus originated in the eighteenth century in London, and this passage deals profoundly with the ethical issues raised by the existence of the ‘clown’ figure. Like the manager of the modern Western world, the clown was the figure whose societal role typified the English persona of that time. A counterbalance to the Enlightenment bourgeois university student, the clown signified accentricity, unstability, and errationality.

To interpret the passage: Albion ‘erred’ (read: wandered) into the country of Ulro, seeking, as the English are apt to do, the comforts of its married women (Beulah). However, his licentious tastes are accompanied by equally potent dangers. If he does not remove himself, a lengthy stay risks his becoming a clown himself, thus losing hope of passage to heaven (since clowns do not have souls). They are, as the passage later states, ‘dead.’

The harrow (read: ‘rake’) refers metaphorically to one of the dissolute, married women in Ulro. While her sisters are taking Albion into bed (where, with women on either side, he will be unable to reason clearly), she will run to the male clowns and rally them into a mob. By them, Albion will be captured and tortured. Their motive? Malice, I suppose.

The very name ‘Albion’ (lit. ‘I’ll be on [top]’) suggests a close relationship between a sexuality governed solely by instinct and animal desire, and the symbolic irrationality of the clown. In this passage, England’s infamous profligacy of this time period is being weighed, and found wanting (or rather, wanton). The cost is too great; the very soul of England is at stake.

Fortunately, Albion chooses to refuse the wiles of the voluptuous clown women, and instead to leave Ulro forever. He is neither captured by the clown men, nor does he become a clown himself, but rather turns away. The English writer the considers the clown’s portent and urges his countrymen to turn away and walk, in a manner of speaking, the higher road.

Fr Mark Christian’s answer should be applauded for its poetic format. But more importantly, it is his answer which resonates most with me, if I were to diregard the intentio auctoris as well as the intentio operis and simply respond honestly to the question. But it is much too serious for the purposes of this contest!

For in the Last Day his error was revealed:
Passionately aiming
For the courtly grandeur of Logres,
Once-noble Albion missed his mark
And endured great shame... reformed? renewed?
Nay, diminished and mired!
Pinned and withering in the soul-stunting
Environs of Lilliput and Blefesco...

Christopher Orr has produced more lines than Fr Mark did, and while I can’t say his response resonates with me quite as much, it cannot be denied that it is probably closer to the mark, or at least more penetrating, from a spiritual perspective. If there had been more entries, no doubt Orr’s would not have been second-to-last.

Blake’s perswasive
Prophet’s voice,
Alba’s Jonah’s jeremiad.
‘Arise’, he heard, ‘and go;
‘Go to Albion and cry:
‘Against! against your wickedness
Your sin, your multitud’nous sin
It’s risen up on high!’
Blake’s prelest, accidental truth proclaims:
‘Turn, turn Brittania chosen!
One Error not remov’d
Destroys the fully human.
Believe in God,
Proclaim a fast,
From greatest to the least.
Cry to God in dynamis!
Turn ye full away
From your evil way!
Who can tell if God, yet, too,
Will turn away today;
Turn away his anger fierce
Our Judgment to allay!’
Error great and error small, errors of all kind.
Suggestion lone is error not,
Passion, Action be;
Error, e’en attachment, too,
Is error ’nough to damn;
Unremov-ed sympathy destroys humanity.
The human Soul’s destroy’d,
Dying, dead, again.
Alas, too, Nations be composite
Of her Souls she be,
Its sum of Error(s) and of Fall(s):
Last Judgments final be–
Forewarned, ye all!

Finally, last but not least, Atychi’s entry is, I am almost certain, the ‘correct’ one. I think he has discovered what Blake himself truly meant. But I’m afraid he must be disqualified for precisely that reason. Nevertheless, the entry stands as a testimony to a gifted interpreter of poetry.

I believe the answer is found at the very beginning of Chapter 2, ‘Jerusalem’ (Plate 28):

‘Every ornament of perfection, and every labour of love,
In all the Garden of Eden, & in all the golden mountains
Was become an envied horror, and a resemblance of jealousy:
And every Act a Crime, and Albion the punisher & judge.

And Albion spoke from his secret seat and said

“All these ornaments are crimes. They are made by the labours
Of loves: of unnatural consanguinities and friendships
Horrid to think of when inquired deeply into; and all
These hills and valleys are accursed witnesses of Sin.
I therefore condense them into solid rocks steadfast! . . .”’

This is his ‘Error’. He was too harsh and ripped the land out of its ‘post-lapsarian’ Edenic existence. He’s being asked to repent from his overly harsh judgment so that the hills and valleys return, so that a proper sense of sensuality can return. Away with the sublime and turn back to the Beautiful.

Thank you all for your participation. I very much enjoyed reading your entries. If I had consolation prizes, I would send them. Subdeacon Lucas, e-mail me your shipping address and I will send the book—this week, I hope!
Posted by Aaron Taylor at 12:00 AM

I thoroughly enjoyed reading the other entries. I concede the intentional stupidity of Friar Lucas to be superior to my own.

Glad you liked them, Ivan!