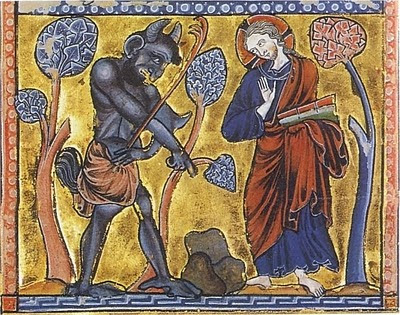 Many English-speaking Orthodox are familiar with the Russian term prelest, commonly used to mean ‘spiritual delusion’. Not as many are familiar with the corresponding Greek term πλάνη, which can be transliterated plani, or plane. In Modern Greek, besides the spiritual connotation, it can also mean simply ‘error’ or ‘fallacy’. [1] But all of these meanings are somewhat metaphorical accretions to the original one. Liddell and Scott define πλάνη as ‘a wandering or roaming about, straying’. [2] It is interesting to note that this is the root of the word ‘planet’, derived from planetes asteres, or ‘wandering stars’. [3]

In a chapter on the monastic ‘cell’ in his fascinating study of the Desert Fathers, Stelios Ramfos asks ‘a naïve question’: ‘Why is the cell, the desert, described as a place and not the city? Is the city not a place? Do not people inhabit it? And if it is not a place, then what is it?’ [4] I found that his answer aided my understanding of the word ‘plani’, but it also inadvertantly led me slightly ‘astray’, if you’ll pardon the pun. He writes:

The cell, the desert, are topoi, ‘fixed positions’ or ‘places’, because the city constitutes plane, a ‘wandering away’ or ‘deceit’. Plane in monastic usage indicates worldly distraction, constant exposure to temptation. How can the city be a place, when instead of living face to face with God there I find myself bound to changing circumstances and things? The anchorite seeks a stable spot in the desert in order to put down roots in an environment without deceit, without distractions, and alone with himself to find God. Monks and lay people move about constantly because they donot fit into the place, and they do not fit into the place because their Ego is unruly. All these things sound strangein our restless times. People today regard purposeless wandering as plane because they do not think of calling topos a type of relationship with a particular space. By contrast, the desert fathers call topos and plane types of the external world’s impassioned relationship with the soul. Delusion is plane, perception of the real is topos.

It is at this point that I became confused, though not through any fault of Ramfos’s:

The meaning of these words is very different from that which they have today. Our reference to place has a Cartesian background: the body is seen as an extended object and the soul as its independent thought. Our conception of place as an abstract field extended in various directions, being of Cartesian provenance, is inevitably mechanical or psychological. The desert fathers, on the other hand, conceive of place as a kind of relationship. In the perspective of body and soul viewed as a psychosomatic unity, the state of the body reflects above all the condition of the soul, highlighting the yawning gap between our modern plane and the plane of the fathers. [5]

Now, although I knew that the Greek word plane meant ‘delusion’ or ‘error’, what confused me here was the introduction of the Cartesian ‘abstract field’, which reminded me of the English word ‘plane’, i.e., ‘the simplest kind of geometric surface’. [6] Thus, when Ramfos wrote of ‘the yawning gap in meaning between our modern plane and the plane of the fathers’ (in Russell’s translation), I imagined the gap between a geometrical ‘plane’ and spiritual plane. This connection lodged in my mind for some time, until I finally decided to look up the etymology of the geometrical term specifically for this post. [7] It turns out, of course, that it derives from the Latin word planus, meaning ‘level ground’. [8]

But I still like the plane/planet connection, as well as Ramfos’s contrast between plane and topos in desert spirituality.

[4] Stelios Ramfos, Like a Pelican in the Wilderness: Reflections on the Sayings of the Desert Fathers, tr. & abgd. Norman Russell (Brookline, MA: Holy Cross Orthodox, 2000), p. 32.

A very rich topic. I recommend to you Silvia Montiglio, especially Wandering in Ancient Greek Culture. Her Silence in the Land of the Logs is also great.

Silence in the Land of the Logos, that is.