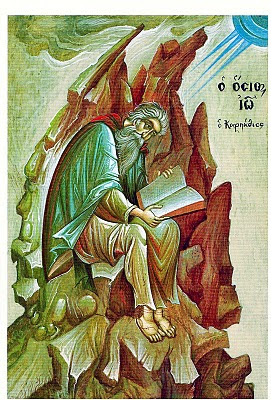 Although we may sometimes be tempted to think of hesychasm as merely a ‘school of mysticism’ somehow unconnected with other aspects of ecclesiastical life, it is interesting to note that the practice of hesychastic prayer naturally gives rise to a hermeneutic. The guarding of thoughts, the descent of the mind into the heart, and the standing before God there in supplication inevitably inform the Fathers’ reading of the Scriptures.

A particularly striking example—used to astonishing effect by my friend, Hieromonk Alexis (Trader) of Karakallou Monastery on Mt Athos, in his response to Pentecostalism [1]—is St Nicetas Stethatos’s interpretation of I Corinthians 14 in the 89th of his chapters on ‘spiritual knowledge’: ‘By merely praying and psalmodizing inwardly with your tongue—that is, by praying in the soul—you edify yourself, but your intellect is unproductive (cf. I Cor 14:14), for you do not prophesy with the language of sacred teaching or edify God’s Church.’ [2] In this case, it is interesting to note that the hesychastic approach to the Scripture has the advantage of not reading into the text such glosses as ‘unknown’ with ‘tongue’, or the—as far as I know—sole use of ακούει to mean ‘understands’ in the entire New Testament. [3]

I discovered another, admittedly less striking, example yesterday. The last verse of the 5th Ode from the Psalter [4] reads, ‘Go, my people; enter thine inner chamber, shut thy door, hide thyself for a little while, until the wrath of the Lord shall pass away’ (Isaiah 26:20). [5] Now, I have long read this naturally as a reference to the hesychastic practice of descending with the mind into the heart, but without recalling a specific patristic use of it as such. Yesterday, however, was the day I finally decided to go looking for one. While the English Philokalia translations unfortunately lack a Scriptural index, the Greek edition from Astir does not. A simple search for Is. 26:20 yielded two results. I will first quote the less significant one. In his work, ‘To the Nun Xenia’, St Gregory Palamas aludes to this verse: ‘Instead of in the desert, you should abide in your cell and hide yourself a little until the tempest of passion has passed over you. When it has passed, spending time outside your cell will do you no harm.’ [6] Although there is here no reference to practice of interior withdrawal, the substitution of ‘the tempest of passion’ for ‘the wrath of the Lord’ does suggest generally a more interiorised, hesychastic understanding of the passage.

But we actually find an already full-blown hesychastic exegesis of this verse from Isaiah in a writer believed to be much earlier than St Gregory. St John of Carpathos, in his ‘Texts for the Monks of India’, writes:

91. So as not to be deceived and carried away by the vain and empty things that the senses bring before us, we should listen to the words of the prophet Isaiah: ‘Come, my people, enter into your inner room’—the shrine of your heart, which is closed to every conception derived from the sensible world, that image-free dwelling-place illumined by dispassion and the overshadowing of God’s grace; ‘shut your door’—to all things visible; ‘hide yourself for a brief moment’—the whole of man’s life is but a moment; ‘until the Lord’s anger be passed by’ (Isa. 26:20. LXX); or, as the Psalms put it, ‘until inquity has passed’ (Ps. 57:1). This anger of the Lord and this iniquity may be caused by demons, passions and sins; as Isaiah says to God, ‘Behold, Thou art angry, for we have sinned’ (Isa. 64:5). A man escapes this anger by keeping his attention fixed continually within his heart during prayer, and by striving to remain within his inner sanctuary. As it is written, ‘Drawn wisdom into your innermost self’ (Job 28:18. LXX); ‘all the glory of the king’s daughter is within’ (Ps. 45:13. LXX). Let us, then, continue to struggle until we enter the holy place of God, ‘the mountain of Thine inheritance, the dwelling, O Lord, which Thou hast made ready, the sanctuary which Thy hands have prepared’ (Exod. 15:17). [7]

It is interesting to note that while we may initially be inclined to think of the more ‘mystical’, interiorised, and allegorical interpretation as being the more appropriate one for monastics, of these two it is actually St Gregory Palamas’s interpretation of the ‘inner chamber’ as the monastic cell which applies the verse in a way more limited to the monastic life. St John, by interiorising the sense of the ‘inner chamber’ within the heart, actually extends the possibility of fulfilling this injunction to all Christians, who are able to descend into and pray within the heart in any circumstances. If we are in doubt about this, let us consider the words of the New Martyr Bishop German (Ryashentsev), written to his spiritual daughter, Vera, from internal exile in the far north of Russia in June of 1925:

Naturally each Christian must persuade himself of the logic of the position which his faith has placed him in: there are fewer churches, so be one yourself. Also become a temple of God. Entry to many shrines has become difficult, so become a shrine and a living icon yourself. [8]

If this hesychastic transformation of the heart into ‘a temple of God’ can be accomplished amid the worst persecution the Church has ever seen, surely it can be accomplished amid the freedom of the West. And let’s not forget that this freedom may not last, and that we too may find ourselves within our lifetimes with ‘fewer churches’, forced and not merely called to become churches ourselves.


[1] Hieromonk Alexis (Trader), In Peace Let Us Pray to the Lord: An Orthodox Interpretation of the Gifts of the Spirit (Regina, 2001).

[3] I may be wrong about this, but unless I’m overlooking something, there are no other renderings of ακούω as ‘understand’ in the Authorised Version at least (see George V. Wigram & Ralph D. Winter, The Word Study Concordance (Pasadena, CA: William Carey Library, 1978), p. 191).

[4] I quote the HTM Psalter—The Psalter According to the Seventy, tr. Holy Transfiguration Monastery (Boston: HTM,1997)—rather than David James’s wonderful Russian Orthodox Psalter (Rye, NH: 2009), since for some reason Russian Psalters do not appear to include this verse. Cf. HTM, p. 276, and Ψαλτήριον (Thessaloniki: To Perivoli tes Panagias, 2004), p. 252, with James, p. 265, and the Optina Slavonic Psalter—Ψалтирь (Optina Pustyn Monastery, 1997), p. 273.

Aaron:
This is a great post! I really like your conclusion; "And let’s not forget that this freedom may not last, and that we too may find ourselves within our lifetimes with ‘fewer churches’, forced and not merely called to become churches ourselves."
As you know I am very much moved by the writings of St Silouan, Elder Sophrony and Fr Zacharias Zacharou. In one of his talks, Fr Zacharias says that Fr Sophrony was rapt by the Divine Liturgy. That according to Fr Sophrony, everything, asceticism, services, even the unceasing self-acting prayer in the heart, had the purpose of allowing us a better presentation at the Divine Liturgy. Fr Zacharias
also says that the Divine Liturgy is a form of hypostatic prayer and that if it is done properly with contrition, in humility and attention, with
sincere prayer for the whole world; it will yield the same benefits in us as hesychasm and even more!
I am not aware of this inter-dependance, between hesychastic prayer and the Divine Liturgy, being stated so clearly by any other father. Do you?

It is good to hear a qualified theologian link the insights of Hieromonk Alexios to the Philokalial Fathers, and to draw great lessons for us today in our struggle. We condemned glossalalia as a Montanist heresy in the early centuries of the Church, and Hieromonk Alexios gives us the reasons, in modern language, why this teaching on tongues is essential to our salvation in Christ.

Thanks for your kind words, guys. I'll soon be posting an addendum to this one taken from an e-mail from an anonymous reader.

David> In answer to your question, not off the top of my head, though it's definitely implicit throughout.