'A Lover of Knowledge'—St Mark the Ascetic 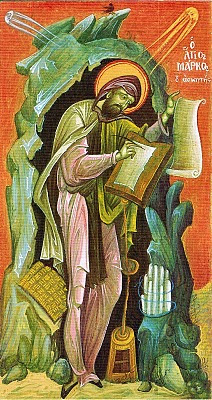 Today, 5 March on the Church’s calendar, we celebrate the memory of the Holy Mark the Ascetic (5th c.), also known as St Mark the Monk. Although St Mark wrote some very important hesychastic treatises which have been included in the Philokalia, very little is known about his life. Here is the account in the Prologue:

An ascetic and wonderworker, he was made a monk at the age of forty by his teacher, St John Chrysostom. Mark spent sixty more years in the Nitrian desert in fasting, prayer and the writing of instructive books. He knew the whole of the Holy Scriptures by heart. He was very merciful, and wept for the distress of any one of God’s creatures. He was once weeping for the blind whelp of a hyena when the whelp received its sight. In gratitude, the mother hyena brought him a sheepskin, and the saint forbade the hyena in future to slaughter the sheep of poor people. He received communion at the hands of an angel. His homilies on the spiritual law, on repentance, on sobriety and so forth fall into the first rank of ecclesiastical literature; the great Patriarch Photius himself them in high esteem. [1]

Although it focuses mainly on his writings, here is what St Nicodemus of the Holy Mountain has to say about St Mark in the ‘Brief Biography’ introducing the latter’s treatises in the Philokalia:

Our holy Father Mark the Ascetic flourished about the year 430. He was a disciple of St John Chrysostom, according to Nikephoros Kallistos (Vol. 2, Book 14, Chapter 53), and a contemporary of Ss Neilos and Isidoros of Pelusion, famous ascetics. Being industrious and having devoted himself to the study of the Holy Scriptures, he wrote many discourses full of every kind of instruction and profit.

Thirty-two of his discourses are mentioned by Nikephoros Kallistos as teaching the entire ascetic way of life. But they are not to be found now. There survive only eight of his discourses, different from these. Kallistos himself and the discerning Photios (Reading 200, p. 268) mention these eight discourses.

The first discourse is Concerning Spiritual Law, the second is On Those Who Think that One is Justified by Works. Both are divided into brief chapters that are easily taken in at a glance. The third is addressed To the Monk Nicholas. These three discourses have been selected for inclusion here, as being more useful than the others and having reference to spiritual law

The writings of Saint Mark are mentioned by the Hosiomartyr Peter Damascene, St Gregory (Palamas) of Thessaloniki, St Gregory the Sinaite, the most holy Patriarch Kallistos, Pavlos Evergetinos, and many other Fathers. Having read these works, they exhort us also to read them.

The Holy Church of Christ, honoring St Mark, commemorates him on the 5th of March, and proclaims his ascetic struggles, the wisdom contained in his discourses, and the gift of miracles which was granted to him from Above. [2]

To this, Fr Placide (Deseille) adds only that he ‘had undoubtedly been a hermit and then hegumen (superior) of a monastery during the fifth century’, [3] and the editors of the Faber Philokalia that this monastery may have been near modern Ankara, in Asia Minor. [4]

Two other things, however, are also worth pointing out. First, looking back to St Mark’s predecessors, Fr Placide notes the close relationship between his teaching and that of the Macarian Homilies. Fr Placide writes:

Like Diadochus of Photike, he stands in the spiritual lineage of Macarius of Egypt and the early Fathers of monasticism, whose teaching he transmitted to new generations: ‘Everyone baptized in the Orthodox fiath has received all grace secretly. But he only receives full certainty of it by fulfilling the commandments […]. Nothing is more powerful than prayer to grant us divine energy […]. The entire practice of the commandments resides in prayer. For nothing is stronger than the love of God.’ ‘Full certainty’ and ‘energy’—these terms certainly express the vocabulary of the spiritual experience in Macarius. Here it appears as the unfolding of the grace of baptism, obtained by practicing the commandments and unceasing prayer. [5]

Second, looking forward to St Mark’s successors, we note that his work played a major rôle in the life of the 11th-c. hesychast, St Symeon the New Theologian. Speaking of himself as about someone else, the latter tells us:

This young man, then, made the acquaintance of a holy monk who lived in one of the monasteries in the city [Constantinople]; and to him he opened his soul and from him he received a short rule which he had to keep in mind. He also asked him for a book giving an account of the ways of monks and their ascetic practices; so the elder gave him the work of Mark the Monk, On the Spiritual Law. This the young man accepted as though it had been sent by God Himself, and in the expectation that he would reap richly from it he read it from ened to end with eagerness and attention. And though he benefited from the whole work, there were three passages only which he fixed in his heart.

The first of these three passages read as follows: ‘If you desire spiritual health, listen to your conscience, do all it tells you, and you will benefit.’ [6] The second passage read: ‘He who seeks the energies of the Holy Spirit before he has actively observed the commandments is like someone who seels himself into slavery and who, as soon as he is bought, asks to be given his freedom while still keeping his purchase-money.’ [7] And the third passage said the following: ‘Blind is the man crying out and saying: “Son of David, have mercy upon me” (Luke 18:38). He prays with his body alone, and not yet with spiritual knowledge. But when the man once blind received his sight and saw the Lord, he acknowledged Him no longer as the Son of David but as the Son of God, and worshipped Him’ (cf. John 9:38). [8]

On reading these three passages the young man was struck with awe and fully believed that if he examined his conscience he would benefit, that if he practised the commandments he would experience the energy of the Holy Spirit, and that through the grace of the Holy Spirit he would recover his spiritual vision and would see the Lord. [9]

It remains to offer a passage or two from St Mark’s writings. One which has stuck with me, although unlike St Symeon I have not put it into practice, is a brief ‘chapter’ from On Those who Think They are Made Righteous by Works. In Cavarnos’s more literal translation, it reads, ‘7. Being a lover of knowledge, become also a lover of toil. For bare knowledge (psili gnosis) puffs up man (1 Cor. 8:1).’ [10] The editors of the Faber edition—the first one I read—have expanded it a bit to try to interpret St Mark’s meaning: ‘7. If you love true knowledge, devote yourself to the ascetic life; for mere theoretical knowledge puffs a man up (cf. 1 Cor. 8:1).’ [11]

But in the interests of offering something a bit lengthier, here is another passage that struck me on my first reading, this one from the Letter to Nicolas the Solitary:

Eventually your intellect, at a loss where to turn, is overwhelmed by dejection and laziness and forfeits all its spiritual progress. Then in deep humility it sets out once more on the path of salvation. Labouring much in prayer and all-night vigils, it uproots the causes of evil within itself through humility and confession before God and our neighbour. In this way it begins to regain the state of watchfulness and, illumined with divine grace and understanding of the Gospels, it perceives that no one can become a true Christian unless he gives himself up completely to the cross in a spirit of humility and self-denial, and makes himself lower than all, letting himself be trampled underfoot, insulted, despised, wronged, ridiculed and mocked; and all this he must endure joyfully for the Lord’s sake, not claiming for himself in return any human advantages: glory, honour or praise, or the pleasures of food, drink or clothes. [12]

Let this be a fruit-bearing Lenten message to all of us who call ourselves Christians.

I also recommend the new complete translation of St Mark in the Popular Patristics Series, here. I posted a list of the contents here.

Kevin> Thank you. I desperately wished I had a copy when I was writing this post. It only occurred to me afterwards that I should have included a link to your post on that book.

Papa John> Will do!