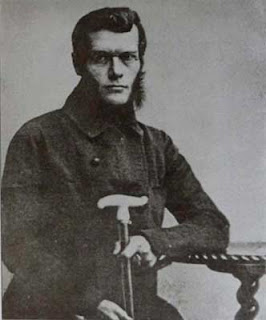 I suppose most of my readers will already know the great 19th-c. intellectual, ‘Slavophile’ philosopher, and spiritual son of the Optina Elder, St Macarius—Ivan Kireevsky. Concerning Kireevsky, Fr Seraphim (Rose) writes, ‘Having . . . gone to Germany to study with the most advanced philosophers, Hegel and Schelling, Kireeyevsky was thoroughly penetrated with the Western spirit and then became thoroughly converted to Orthodoxy. Therefore he saw that these two things cannot be put together.’ [1] In his study of Optina Pustyn, I.M. Kontzevitch has observed:

Of all the lay people who spent time in Optina Monastery, Kireeyevsky was closer than anyone to its spirit. . . . In Optina he saw the wisdom of the Holy Fathers brought to life. Being a philosopher, he felt that higher knowledge of truth was linked with integrity of spirit, with the restoration of the harmony of all mankind’s spiritual powers. This restoration is attained by inner ascetic labor, by spiritual activity. [2]

Kireevsky’s essay, ‘On the Possibility & Necessity of New Principles in Philosophy’, in Kontzevitch’s opinion, ‘laid a foundation for independent thought in Russian philosophy’, [3] and in it, according to Boris Jakim and Robert Bird, he ‘foresaw the return of philosophy to life and to the Church, which would restore the wholeness of philosophy in the integral knowledge granted by Christian belief.’ [4] The essay elicited the following verses from A.S. Khomiakov:

Beyond the sea of meditation,
Beyond, like waves, your thoughts, your dreams:
A realm of bright illumination,
Transcendent beauty, radiance gleams.
Unfurl thy sail, thou trav’ler bold,
Like the white wing of a swan;
Prepare to journey, and behold,
Before thine eyes, a new sun dawn.
Return again with precious treasure;
Bring nurture to the hungry heart,
Granting burdened souls new leisure,
Strength to weary wills impart. [5]

After his death, Kontzevitch notes that Kireevsky’s body was buried near the monastery church of Optina ‘at the feet of the grave of Elder Leonid’. When St Philaret of Moscow found out, he ‘perceived the great honor which was shown by Optina Monastery to her devoted son’. [6]

Well, I was looking through this essay again trying to find a particular passage, and instead I came across the passage below (the other turned out to be St Ignatius Brianchaninov anyway). I had forgotten it, but upon a rereading, was reminded of how closely Kireevsky supported some of the points I’d been trying to make in earlier posts here and here.

Christianity, however, which altered the spirit of the ancient world and resurrected the lost dignity of man’s nature, did not unconditionally reject ancient philosophy. For the harm and falsehood of philosophy lay not in the development of the mind which it produced, but in its final conclusions, which depended on the fact that it considered itself the highest and only truth, conclusions which were eliminated as soon as the intellect recognized a superior truth. Then philosophy took a subordinate position, appearing as relative truth and serving as the means for the confirmation of the highest principle in the realm of a different culture.

Although engaged in a life-and-death struggle with the falsehood of pagan mythology, Christianity did not destroy pagan philosophy but accepted it and transformed it in accordance with its own higher philosophy. The brightest lights of the Church—Justin, Clement, Origen (insofar as he was Orthodox), Athanasius, Basil, Gregory, and most of the great Holy Fathers upon whose work, so to speak, the Christian teaching became established in the midst of a pagan culture—not only were thoroughly versed in ancient philosophy but also utilized it for the rational construction of the first Christian philosophy, which combined the development of science and reason into one all-embracing vision of faith. The part of pagan philosophy which was true and was pervaded with the Christian spirit was the intermediary between faith and the external culture of mankind. And not only at the time when Christianity was still combating paganism, but also in the whole subsequentexistence of Byzantium, we see that the profound study of the Greek philosophers was the common legacy of almost all the Church teachers. For Plato and Aristotle could only be of use to Christian culture as great scholars; they could not endanger it as long as as Christian truth occupied the summit of man’s culture. For it should not be forgotten that in its struggle with paganism Christianity did not concede superiority in intelligence to it, but, permeating paganism, placed in its own service the whole intellectual activity of the world, past and present, to the extent to which it was known.

If there was any danger anywhere that a Christian people might deviate from the true teaching, the danger lay primarily in ignorance. The growth of rational knowledge, of course, does not offer salvation, but protects from false knowledge. It is true that where the mind and the heart have once been permeated by Divine truth, there the degree of learning becomes a side issue. It is also true that consciousness of the Divine is equally compatible with all stages of rational development. But in order that Divine truth might permeate, inspire, and guide man’s intellectual life, it must subordinate external reason to itself and dominate it, not remain outside its sphere of action. Divine truth must stand above other truths in the general consciousness as the sovereign principle pervading all culture. For each separate individual Divine truth must be supported by the like-mindedness of cultivated society. Ignorance, by contrast, keeps people from vital intellectual interchange through which truth among men and nations is sustained, advanced, and enlarged. An ignorant mind, even when accompanied by the most righteous convictions of the heart, gives birth to irrational jealousy, from which in turn springs the deviation of the mind and the heart from true convictions. [7]

Do you agree with Fr. Seraphim Rose and I.M. Kontzevich that Ivan Kireyevsky was not really a "Slavophile"?

Thank you, Aaron, for this post. I have been curious about Ivan Kireyevsky since reading about him in Fr. Damascene's biography of Fr. Seraphim. Do you know if there are any other writings of his available in English translation?

Kireyevsky's point about Christianity's relationship with philosophy (contrasted with its relation to pagan mythology) is also admirably made in a book by the current Pope, Benedict XVI, written when he was still Cardinal Ratzinger - Truth and Tolerance. Ratzinger argues that Christianity was so radical in its time because it was the only religion, with a cultus, to also claim to be true in the sense that philosophers spoke of truth. Thus, one does not find arguments from the early fathers that Christianity is the 'true paganism' but rather that it is the 'true philosophy' as we see in St. Justin and others. It attracted philosophically minded men, like Blessed Augustine and St. Ambrose, who appreciated the writings of the Platonists but realized that one couldn't worship the 'God of the Philosophers.' They found the fulfillment of pagan philosophy, the 'expectation of the nations,' in the church.

I guess one question I have is whether this fruitful encounter can only take place between Christianity and ancient philosophy, or whether Christianity is called on to somehow integrate the philosophy and science of each age into "one all embracing vision of faith." Obviously, much of modern philosophy is formulated against faith a priori. One cannot integrate Christianity and Nietzsche, right? But perhaps Elder Sophrony provides the right model - I heard recently that he was reading the existentialist philosophers when he was founding his monastery in Essex, so that he could express timeless Orthodox truths in the language of the day. I ask this question because it is easy for us who love the ancient world to ignore modernity altogether - I'm certainly guilty of this. Is it our responsibility to engage the current intellectual culture in this way, without falling into a barren obsession with 'relevance'?

Mr Wolff> Fr Seraphim & Prof. Kontzevitch certainly knew a lot mroe about this than I do, & I would definitely agree that Kireevsky rises about any kind of narrow nationalism or ethnocentrism. But I can also see why he is called a 'Slavophile', however inaccurate the label may ultimately be. As Jakim & Bird point out, in Kireevsky's letter to Count Komarovsky, 'Russia's success is...attributed to Russian national character, more than to Russia's fortuitous acceptance of pure Christianity.'

Taylor> I could do a little digging, but the only other work of Kireevsky I know of in English is the letter referenced above, commonly called 'On the Nature of European Culture & on its Relationship to Russian Culture', which is available in On Spiritual Unity: A Slavophile Reader.

As for your question about modern philosophy, I certainly agree that we have a 'responsibility to engage the current intellectual culture in this way', but I think we have to be careful of drawing too close an analogy with the Fathers & ancient philosophy. On this issue you should read Chapt. 17 of Cavarnos's Orthodoxy & Philosophy, where he directly addresses this question. Cavarnos argues that the categories & terminology of the ancients are still more than adequate to the Faith, & that to a degree not true of the ancients, modern philosophers are motivated more by vainglory & egotism than by a search for truth. Most of their works are correspondingly foreign and uncongenial to faith.

I did find another piece of Kireevsky's in English: A Documentary History of Russian Thought--From the Enlightenment to Marxism, tr. & ed. W.J. Leatherbarrow & D.C. Offord, contains 'A Reply to Khomyakov'.

Aaron: I returned to this post after reading Letters from Father Seraphim, a book I recently discovered at St Tikhon's Monastery Bookstore. On p. 121, Hieromonk Ambrose notes that Fr Seraphim translated materials related to Kireyevsky for an article he was writing for his publication Nikodemos. I wonder if these materials are available at the Platina monastery, and whether the article from Nikodemos is findable.

Taylor> I'll look into that. I've corresponded a bit with Fr Damascene and with Nikocdemos Publishing. I can get in touch with them and ask them.