The Joys of Icelandic 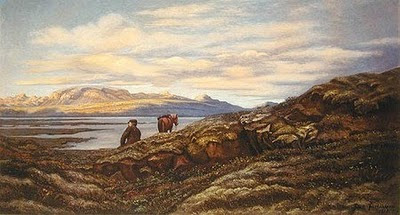 In his ‘biography’ of Lewis, Tolkien, & Co.—The Inklings (Boston: Houghton Mifflin, 1979)—Humphrey Carpenter points out how important the Icelandic language was to Tolkien, and how the bond between him and Lewis formed through a club devoted to the reading of Icelandic literature:

Tolkien had decided to from a club among the dons to read Icelandic sagas and myths. Among his proposals for syllabus reform [in Oxford’s English School] was the suggestion that Old Icelandic, also known as Old Norse, should be given a more prominent place among early and medieval studies, at least for the specialists; and he thought that the best way to proselytise would be to show his colleagues how enjoyable the reading of Icelandic can be. So the Coalbiters came into existence.

Their Icelandic name was Kolbítar, a jesting term meaning ‘men who lounge so close to the fire in winter that they bite the coal’. (p. 27)

Hearing of such an ‘ivory-tower’-sounding pastime, however, it is interesting to read a down-home take on the modern language—very little changed since the Middle Ages—by the American poet, Bill Holm (1943-2009), a grandson of Icelandic immigrants who maintained a second home in his ancestral country. I first learned of this poem from the audiobook of Garrison Keillor’s anthology, Good Poems. I have taken the text from this blog:

In this language, no industrial revolution;
no pasteurized milk; no oxygen, no telephone;
only sheep, fish, horses, water falling.
The middle class can hardly speak it.

In this language, no flush toilet; you stumble
through dark and rain with a handful of rags.
The door groans; the old smell comes
up from under the earth to meet you.

But this language believes in ghosts;
chairs rock by themselves under the lamp; horses
neigh inside an empty gully, nothing
at the bottom but moonlight and black rocks.

The woman with marble hands whispers
this language to you in your sleep; faces
come to the window and sing rhymes; old ladies
wind long hair, hum, tat, fold jam inside pancakes.

In this language, you can’t chit-chat
holding a highball in your hand, can't
even be polite. Once the sentence starts its course,
all your grief and failure come clear at last.

Old inflections move from case to case,
gender to gender, softening consonants, darkening
vowels, till they sound like the sea moving
icebergs back and forth in its mouth.

I thought this not only a powerful evocation of the particular delights of a particular language, but also an equally powerful pæan to the beauty of traditional rural life. What an effective inducement to learn Icelandic!

This post left me sad. I had not known that Bill Holm had died. I heard him read several times when I lived in MN. I once heard him get in a conversation about iceland with a small bookshop owner who I used to pick up some hours moonlighting for - the owner of that store had just come back from an "ancestry" trip to Iceland.

One of my favorite contemporary poems is by the "hog poet" David Lee, and the voice of the poem is said to be that of Bill Holm:

a poem by David Lee

Who sed that?
Did somebody say that
or was it in one of them dam books you read?

Thanks for the poem, Owen. I assumed you'd probably been to Holm's wake and everything. Sorry to be the bearer of bad news!

Had you read (or heard) 'The Icelandic Language' before? I thought of you when I decided to post it.

I corresponded a little with Benedikt Benedikz, who'd been a pupil of Tolkien's and who was deeply conscious of his own Icelandic heritage, before his death a year ago. I wish that I could have asked him what he thought of the poem "The Icelandic Language."

Here's his obituary from the Times:

Extollager> Thanks for bringing Benedikz to my attention. I've put Varangians of Byzantium on my Amazon wish list. That's a neat story about him spending the night with an Orthodox monk!