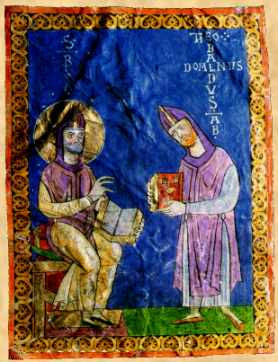 Today, 14 March on the Church’s calendar, we celebrate the memory of our Holy Father Benedict of Nursia (480-547), Abbot of Monte Cassino and Father of Western Monasticism. I will not, however, be doing one of my usual hagiographical posts today for two reasons. First, my parish—St Benedict (ROCOR)—celebrates its feastday on the feast of the translation of St Benedict’s relics rather than today, so that is the day I prefer to do my St Benedict post. Second, it’s a Saturday, and people don’t seem to pay as much attention to my blog on Saturdays. For these reasons, I’m just going to post an interesting note. This is Henry Wadsworth Longfellow’s note to line 74 of Canto XXII of Dante’s Paradiso, where St Benedict says—

I have blogged before on the appearance of St Benedict in this Canto, but acquired Longfellow’s translation only since that time. I will post more of Longfellow’s notes on St Benedict this summer for the parish feastday, but for now, this will have to suffice.

74. So neglected, that is is mere waste of paper to transcribe it. In commenting upon this line, Benvenuto [Rambaldi da Imola] gives an interesting description of Boccaccio’s visit to the library of Monte Cassino, which he had from his own lips. ‘To the clearer understanding of this passage,’ he says, ‘I will repeat what my venerable preceptor, Boccaccio of Certaldo, pleasantly narrated to me. He said, that when he was in Apulia, being attracted by the fame of the place, he went to the noble monastery of Monte Cassino, of which we are speaking. And being eager to see the library, which he had heard was very noble, he humbly—gentle creature that he was!—besought a monk to do him the favour to open it. Pointing to a lofty staircase, he answered stiffly, ‘Go up; it is open.’ Joyfully ascending, he found the place of so great a treasure without door or fastening; and having entered, he saw the grass growing upon the windows, and all the books and shelves covered with dust. And, wondering, he began to open and turn over, now this book and now that, and found there many and various volumes of ancient and rare works. From some of them whole sheets had been torn out, in others the margins of the leaves were clipped, and thus they were greatly defaced. At length, full of pity that the labours and studies of so many illustrious minds should have fallen into the hands of such profligate men, grieving and weeping he withdrew. And coming into the cloister, he asked a monk whom he met, why those most precious books were so vilely mutilated. He replied, that some of the monks, wishing to gain a few ducats, cut out a handful of leaves, and made psalters which they sold to boys; and likewise of the margins they made breviaries which they sold to women. Now, therefore, O scholar, rack thy brains in the making of books!’ [3]

If you must have more on St Benedict, see this post and this one.

Happy Feast Day! With the Feast!

Sorry I neglected to respond to this, Elizabeth. Thank you for the well wishes!