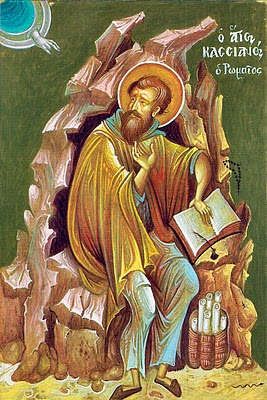 Today we celebrate the memory of St John Cassian the Roman (c. 360-435). Although his feast is listed for 29 February, on non-leap years it is moved to 28 February on the Church’s calendar. Gennadius Scholasticus of Marseille praises St Cassian thusly, ‘He wrote from experience, and in forcible language, or to speak more clearly, with meaning back of his words, and action back of his talk.’ [1] In Step 4:105 of the Ladder, St John Climacus calls him ‘the great Cassian’ who writes ‘with beautiful and sublime philosophy’. [2] Archimandrite Ioanichie (Bălan)—whose Life of St Cassian I posted in its entirety here—refers to St Cassian as ‘This great ascetic, theologian, organizer of monasteries, teacher, apologist, and renowned ecclesiastical writer of the Church of Christ’. [3] Archimandrite Placide (Deseille) notes, ‘One of the West’s most important ancient sources is the work of St John Cassian of Marseille, who transmitted the doctrine of the Desert Fathers and Evagrius of Pontus to the Latin world and who was tirelessly read by spiritually serious Westerners.’ [4] Here is the account of his life in the Prologue:

This great spiritual guide was born in Rome [most scholars follow the testimony of Gennadius that it was Scythia Minor, modern-day Romania] of eminent parents. In his youth he studied the secular disciplines, especially philosophy and astronomy. After that, he gave himself entirely to the study of Holy Scripture. He moved from the good to the better, and, desiring high and higher steps to perfection, Cassian left Rome for the East, to learn more and attain this great perfection. He went to Bethlehem, then lingered in Egypt, at Nitria, among outstanding spiritual athletes from whom he learned to exercise himself in all the virtues. In Constantinople, he became a pupil of St John Chrysostom and was ordained by him to the diaconate. He finally returned to the West and settled near Marseilles, there founding two monasteries, one for monks and one for nuns. At the request of the monks, Cassian wrote many books, among which the ones on the lovers of the spiritual life are especially helpful: ‘Eight books on the struggle against the eight chief passions’ (The Institutes). His book against the Nestorian heresy (On the Incarnation of the Lord), which he wrote at the request of Archdeacon (later Pope) Leo, is very important. He served the Lord faithfully and enriched many by his wisdom, then entered into eternal rest in 435. St Cassian’s relics are prserved to this day in Marseilles. [5]

But as the Prologue suggests, it is St Cassian’s spiritual writings for which he is most honoured—the Conferences and the Institutes. Of these, the great Ivan M. Kontzevitch has written:

As for the works of St Cassian, there is expressed in them the whole exceptional breadth and many-sidedness of his education and development. He received in his homeland, Marseilles [Prof. Kontzevitch is following a minority opinion here], a brilliant secular classical education. In the East, both in Constantinople and in the desert, he assimilated not only the wisdom of the Eastern holy Fathers and ascetics, but also learned through experience the ‘science of sciences’: the path to perfection and the laws of the unseen warfare. Then, having returned to the West, he became acquainted with the leaders of Western thought, such as Blessed Augustine and St Ambrose of Milan. [6]

St Cassian is the only Latin Father to be included in either the Apophthegmata Patrum or Gerontikon, or the Philokalia. In his note on St Cassian in the latter collection, St Nicodemus mentions what he has included, and quotes St Photius the Great on St Cassian:

Of the discourses which he authored, there have been placed here the one about The Eight Thoughts [from the Institutes] and the one about Discimination [from the Conferences], as they emit every kind of benefit and grace. They are mentioned by the most wise Photios, who in The 157th [sic—it should be the 197th] Reading [of the Bibliotheca] says the following: ‘The second discourse is addressed to the same person (namely, Kastor), and bears the title Concerning the Eight Thoughts. It pertains to gluttony, fornication, greed, anger, sorrow, despondency, vainglory, and pride. These discourses are extremely useful for those who choose to undertake the struggle of asceticism. He also wrote a brief discourse which teaches what discrimination is, that it is greater than the other virtues, whence it is engendered—that it is rather a gift from Above—and so on.’ [7]

Of course, as Columba Stewart observes, ‘Cassian’s fame—to some, his notoriety—has largely to do with his role in the debates over grace, free will, and asceticism that began in the 420s and continued sporadically for a century until the Council of Orange in 529.’ [8] I have written on this issue before (here). St Cassian’s teaching on these matters, ‘which is the teaching of the Orthodox Church’, [9] is found most fully developed in Conferences 13. But unfortunately, modern Roman Catholic scholars gave his teaching what Fr Seraphim (Rose) rightly calls ‘the most unjust name of “Semi-Pelagianism”’. [10] Even in this more ‘ecumenical’ age, no less a scholar than St Cassian’s gifted translator, the Dominican Boniface Ramsey, claims that in ‘re-stressing’ free will and human effort, St Cassian ‘overstressed them, for merely giving them a nearly equal place with grace [?] was to give them too great a place.’ [11]

Obviously, Fr Seraphim has shown how Orthodox the Conferences are on grace, but even Stewart, himself a Roman Catholic Benedictine, recognises and has argued that there is nothing heretical about St Cassian’s teaching on this point. He approvingly quotes a dissertation by Lauren Pristas, ‘When Cassian is understood on his own terms, and when the limits he puts on his discussion are fully respected, he cannot be said to err—even by the standards of later orthodoxy.’ [12] Thus, as an example of St Cassian’s writings I shall cite a central passage dealing with this issue of grace and free will. The speaker is Abba Chaeremon, from Conferences 13.11.4—13.12.3:

‘. . . These two things—that is, the grace of God and free will—certainly seem mutually opposed to one another, but both are in accord, and we understand that we must accept both in like manner by reason of our religion, lest by removing one of them from the human being we seem to contravene the rule of the Church’s faith. 5. For when God sees us turning in order to will what is good, he comes to us, directs us, and strengthens us, for “as soon as he hears the voice of your cry, he will respond to you.” And: “Call upon me,” he says, “on the day of distress, and I will save you, and you shall glorify me” (Ps 50:15). On the other hand, if he sees us unwilling or growing lukewarm, he brings to our hearts salutary exhortations by which a good will may be either repaired or formed in us.

XII.1. ‘For it must not be believed that God made the human being in such a way that he could never will or be capable of the good. He has not allowed him a free will if he has only conceded that he will what is evil and be capable of it but not of himself either will the good or be capable of it. And how will those words of the Lord stand, which he spoke after the sin of the first man: “Behold, Adam has become like one of us, knowing good and evil” (Gn 3:22)? 2. For we must not think that he was such as to have been completely ignorant of the good previously. Otherwise it will have to be said that he was fashioned like a kind of irrational and senseless animal, which is quite absurd and utterly foreign to the Catholic faith. Rather, in the words of the most wise Solomon: “God made man upright” (Sir 7:29a LXX)—that is, so that he would continually enjoy knowledge only of the good. But “they sought out many thoughts” (Sir 7:29b LXX), for they came to know, as has been said, good and evil. After his sin, therefore, Adam conceived a knowledge of evil that he had not had, but he did not lose the knowledge of good that he had received. 3. Finally, in the words of the Apostle it is very clearly stated that after Adam’s sin the human race did not lose the knowledge of the good: “When the Gentiles, who do not have the law, naturally do the things of the law, they who do not have the law are a law unto themselves. They show the work of the law written in their hearts, their conscience bearing witness to them and their thoughts within them accusing or defending them, on the day when God will judge the secrets of men” (Rom 2:14-16). [13]

Last year, in my unflagging zeal for St John Cassian, in addition to Fr Ioanichie’s complete Life I posted on St Cassian’s place in the Tradition of the Church (here) and a long passage from Conference 21 on fasting and the summum bonum (here). I also linked to an earlier post I had written (here) wherein I briefly referred to St Cassian as a supplement to St Benedict’s teaching on lectio divina. Hopefully in the next week or so I’ll be able to produce a post quoting at length a passage from St Cassian’s writings which, according to Helen Waddell, illustrates ‘his ironic human perception, and make intelligible the more alien experience of the desert, its concentration within the four walls of one’s cell.’ [14]

As St Nicodemus ends his brief note on St Cassian in the Philokalia, ‘The Church commemorates St John Cassian on the 29th of the month of February, greatly honoring him with hymns of praise.’ [15] Here is one of those hymns:

Thy words breathe forth the sweetness of heavenly cassia, * dispelling the foul odour of passions and pleasures; * but with the sweet fragrance of thy discretion and temperance, * they make known the spiritual ascents in the Spirit, * leading men on high, O righteous Father John Cassian, * divinely-sent guide of monks. [16]

What a wonderful icon of St John Cassian!

Yes, I know! It's by a Greek iconographer, Giorgos Kordes, who I believe was a student of Kontoglou.

Yes, beautiful icon. I have been looking for an icon of St. John like this for some time. Thanks for postiing it.

You're quite welcome. To tell the truth, I was looking forward to doing this post in part just so I could post this icon!

Do you know where I could purchase this icon? Thanks!

Unfortunately, the only way I know of to get a print of it is to purchase a package of Kordes prints of various authors from the Philokalia called Prosopa Olophota. It is published by Armos Publishers in Greece. I'm not sure if there's any way to order directly from there here, but if you're interested, I could ask a friend in Thessaloniki to pick one up for you at their bookshop and ship it.