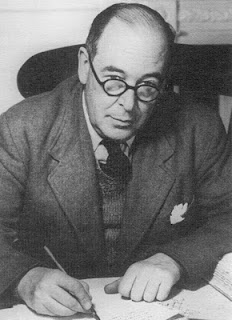 On Saturday I finally finished Michael Ward’s amazing Planet Narnia: The Seven Heavens in the Imagination of C.S. Lewis. At some point I hope to prepare a full review, but for now, I’d like to spoil for you what was for me a small surprise. In the book’s twelfth and final chapter, ‘Coda’, Ward sets out to describe briefly how he discovered his thesis (which in my opinion he has demonstrated beyond any reasonable doubt). First, he says that ‘any “Eureka” moment, however unplanned, inevitably has a history.’ In his case:

it consisted of thirty years’ exposure to the texts in question, ten years’ teaching Lewis to undergraduates, three years’ living at The Kilns, Lewis’s Oxford home, and eighteen months’ work on this doctoral research, which originated under the provisional title, ‘C.S. Lewis and the Word: Christ, Scripture and Language.’ [1]

Second, a friend gave him the soundtrack to the Royal Shakespeare Company’s production of The Lion, the Witch and the Wardrobe, which immersed him ‘in an orchestral and mostly non-verbal rendering of Lewis’s work’. [2]

Third, and most interesting to me and, I presume, my readers, he had a meeting with his spiritual director, the Rt Revd Simon Barrington-Ward, the former (Anglican) Bishop of Coventry and a friend of Lewis at Magdalene College, Cambridge. At this particular meeting, Barrington-Ward was trying to explain ‘what Lewis meant by “wordless prayer”, a significant theme of Letters to Malcolm and one that had occupied much of the first year of my doctoral research.’ [3] To explain this, Barrington-Ward read aloud from Elder Sophrony’s book, The Monk of Mount Athos! Here is Ward’s account of it:

. . . [H]e opened up Archimandrite Sophrony’s biography of Father Silouan, The Monk of Mount Athos, and read aloud the passage describing Silouan’s meeting with the Russian ascetic, Father Stratonicos. Although this passage had nothing directly to do with Lewis, let alone his understanding of medieval cosmology, it illustrated well the subject of wordlessness which in turn (as it later transpired) proved to illuminate the planetary theme of the Chronicles.

Stratonicos, a wise and eloquent monk, full of his intelligence, has nothing to say when Silouan, in all simplicity, asks him how the perfect speak: he suddenly realises that he does not know the first thing about perfect speech. But his inability to speak allows him to hear, and into his humbled silence Silouan plants the message that ‘The perfect never say anything of themselves. . . . They only say what the Spirit suffers them to say.’ [4] Spiritual utterances in prayer, so Silouan suggests, are not just human words directed to a spiritual listener with spiritual intent; they are a participation in (one might say an Enjoyment of) the Holy Spirit himself. Silouan’s point, I saw, was essentially the s ame as that made by Lewis in Letters to Malcolm: ‘In prayer, God speaks to God.’

This account of Silouan’s exchange with Stratonicos made an extraordinarily deep impact on me. There was a momentous charge in the words I was hearing and the atmosphere in the room suddenly became somehow intense and palpable. It was a most unusual experience and I went back to my theological college, Ridley Hall, in a kind of daze. Exactly what had happened to me, I did not know, but I felt it to be of tremendous import. [5]

That night, as he was reading The Discarded Image, Ward suddenly decided to compare the chapter on ‘The Heavens’ with Lewis’s poem, ‘The Planets’. 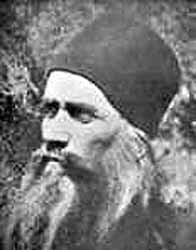 Reading the phrase ‘winter passed / And guilt forgiven’, about Jupiter, he was reminded of the plot of Lion. He continues:

As the whole pattern swam into my ken I revisited my conversation with Simon Barrington-Ward. Silouan had mentioned to Stratonicos the notion of irradiated utterance, the Holy Spirit speaking through human prayers; here in Lewis’s fiction was an imaginative version of a similar sort of thing, spiritual symbols irradiating stories. I immediately and instinctively knew, though it took much longer to understand with clarity, that Lewis had cryptically designed the Chronicles so that the seven heavens spoke through them like a kind of language or song. . . . I did not shout ‘Eureka!’ and run naked down the street like Archimedes, but I did jump from my bed in a state of undress and began to pull books from my shelves, chasing links from work to work. [6]

I thought this rather extraordinary. Admittedly, after first rereading the passage in Elder Sophrony’s book, I was a little skeptical at the idea that Lewis had managed to say the same thing as an experienced Elder speaking in what is clearly a moment of divine inspiration. But upon reflection this does not seem to me so unlikely after all. First, it occurred to me that what was most important in the story about St Silouan was not the content of his statement, which I myself might have said based on guesswork or book-learning, but the inspiration to say it at that moment, to that person. As Leonard Stanton has pointed out:

Even if it is accepted as a matter of faith that the apophthegm has spiritual value, it must be allowed that the value is not contained fully in the apophthegm as a verbal structure, in its words. The listener must seek beyond the word to the speaker, to the context in which the word was uttered, and to the transcendent realm that the word, like an icon, signifies only dimly. [7]

Second, I recall reading only Sunday night in Lewis’s Reflections on the Psalms an explanation of ‘prophecy’ that provided a perfect analogy to explain the possibility of someone who is not a Saint nevertheless expressing an extraordinary insight into some spiritual matter:

If a man who knew only England and had observed that, the higher a mountain was, the longer it retained snow in early spring, were led on to suppose a mountain so high that it retained the snow all the year round, the similarity between his imagined mountain and the real Alps would not be merely a lucky accident. He might not know that there were any such mountains in reality; just as Plato probably did not know that the ideally perfect instance of crucified goodness which he had depicted [in Republic II, 361C-362A] would ever become actual and historical. But if that man ever saw the Alps he would not say ‘What a curious coincidence’. He would be more likely to say ‘There! What did I tell you?’ [8]

So without having read Letters to Malcolm, I think Ward could, at least, be right about the agreement of Lewis’s with St Silouan’s teaching. But either way, it is certainly interesting to know that St Silouan is responsible for inspiring the greatest study of C.S. Lewis yet produced.

Thank you! I have procrastinated purchasing Planet Narnia, but your post changes that!

...St Silouan is responsible for inspiring the greatest study of C.S. Lewis yet produced.

Ooh, wait till Herman hears you wrote this! (Now, if you had said the greatest study "yet published"...

Orr> I hope Herman does find out! I can't possibly compare his study until he gets around to sending it to me!

Theo-fan> Glad to hear it!

Wow! Really, really fascinating stuff! I have not read PN yet but it is on my list.

It does seem to me, though, that Ward (and the bishop) went in another direction with the words of St Silouan than he meant them. St Silouan isn't speaking (at least here) about "the Holy Spirit speaking through human prayers", but rather about how the perfect speak in the Holy Spirit to other human persons: the apophthegm, or word of the elder.

I still think Ward's insight has value, and not simply for understanding the Chronicles of Narnia and the planetary background (which is fascinating). But I would think it has more to do with the middle way, the spiritual vision of God in the creation, the book of nature, rather than on wordless prayer in the Holy Spirit.

Or perhaps I am missing it? Is Ward implying that in prayer in the Holy Spirit the human pray-er is thereby "tuned in" to the cosmos precisely because the cosmos is itself "tuned to" the Holy Spirit? This would be akin to the notion of the music of the spheres, which I believe Lewis understands to be heard spiritually.

Papa John> That had occurred to me as well about Ward's interpretation of St Silouan's statement. But it seems like what St Silouan says could be seen in a sufficiently broad way as to encompass the apophthegm as well as the words of prayer.

As for the connection of this to the composition of the Narniad, I took it merely as an analogy and less as a matter for direct application. I read him as taking the notion of 'wordlessness' and divine 'influence' and seeing them as being employed on a literary level.

I've put a link to this post on Ward's Facebook wall, so maybe I can get him to respond to the question himself!

Aaron, if you have Lewis' book of poems (titled "Poems") read the poem "Prayer" on p122. This sense that prayer is God talking to God is evident there as Lewis characteristically turns a modern notion on its head. If you don't have the poem let me know if you are interested in reading it.

Papa John> I have it, and read it. Very nice! I love Lewis's poems.