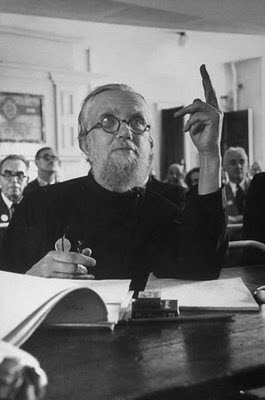 Last week I started making a real effort to go through a lot of my papers and try to organise them. I’m pleased to say that I have made enormous progress, and best of all, I have found a few things that I had not seen in quite some time. Among others, there were some photocopies of some obscure articles by Fr Georges Florovsky. One, ‘Eschatology in the Patristic Age: An Introduction’, from a 1956 issue of Greek Orthodox Theological Review, [1] was reprinted in vol. 4 of Fr Florovsky’s Collected Works—Aspects of Church History—under the title, ‘The Patristic Age & Eschatology: An Introduction’. [2] But the other three, all photocopied from obscure sources in the theology library of Aristotle University of Thessaloniki by my friend Mark Montague, do not seem to have been included in the Collected Works.

One is called ‘The Doctrine of the Church & the Ecumenical Problem’, and was published in 1950 in The Ecumenical Review. [3] Another, taken from a 1969 volume of John XXIII Lectures at Fordham University, is actually a two-fer: the first piece is entitled ‘The Image of the Church’, and the second ‘The New Vision of the Church’s Reality’. [4] But the last has no citation information on it. It is a very brief piece (four pages), evidently from some sort of ecumenical meeting, entitled ‘The Message of Chalcedon’, and is followed by other treatments of Chalcedon by W. Norman Pittenger, Wm. R. O’Connor, Fr Alexander Schmemann, and John Dillenberger.

I thought I’d post about this for two reasons. First, I wonder if anyone can tell me the source that these papers must have come from (Mark, did you perhaps write the source on your own copy?). Second, there were a couple of observations from Fr Florovsky’s paper that I really liked and wanted to quote. So without further ado, here is a longish passage from this piece:

. . . Modern man, it is so often suggested, cannot take any interest in Chalcedon. its archaic formula is utterly irrelevant to the modern quest for living truth.

It may be true, that ancient formulas fail to impress the modern mind. I venture to submit, however, that the fault is not with the old formulas, but rather with the ‘modern mind’. The formula of Chalcedon is very often mistaken for what it was never meant to be. The Chalcedonian definition was not a self-explanatory metaphysical statement. It was a dogmatic statement, a confession, a statement of faith. It must not be isolated from the total vision of that ‘great mystery of godliness’which was to be apprehended by faith. . . . It was, in a sense, a theological fence around the Mystery. ‘Modern man’ is prone to revolt against what he believes to be ‘Greek intellectualism’, with its sophisticated, scholastic and sterile ‘definitions’. Now, I believe Karl Barth is perfectly right when he reminds the modern man that all this alleged ‘Greek intellectualism’ was in fact but an aspect of that sincere seriousness with which the Early Church used to approach and to contemplate the Mystery of the Incarnation, the mystery of the Holy Night. . . . The mystery is so great and ineffable. No wonder that its theological description is ‘subtle’ and ‘intricate’. One cannot avoid some dialectical tension in the credal witness to mystery. ‘Simplicity’ in this case would mean inevitably rather ‘simplification’, and miss the point. On the other hand, again, it may be true that human passion and blindness did play some role in the old theological disputes, as they obviously do in our own contemporary conflicts. But it is bad historical taste to overpress the ‘non-theological’ factors of religious and theological conflicts. Heresy is often, in the witty phrase of Chesterton, ‘but truth gone mad’. . . .

The mystery of the Incarnation can never be fully comprehended by a finite mind. Still, credo, ut intelligo. Faith brings illumination to human intellect too. And this fides quaerens intellectum is the driving power of all theological inquiry and research. It has been wittly suggested that Orthodoxy consists in the right language—‘l’Orthodoxie est faite d’un bon lexique’. A vague language and an unsuitable vocabulary may obscure and betray the truth. The early Church was in need of an adequate vocabulary. It had to coin new terms—‘to kainotomein ta onomata’, in the phrase of St Gregory of Nazianzus. [5]

[4] Fr Florovsky, ‘The Image of the Church’, John XXIII Lectures, Vol. 2: 1966 Byzantine Christian Heritage, John XXIII Center for Eastern Christian Studies (NY: Fordham U, 1969), pp. 96-104; ‘The New Vision of the Church’s Reality’, pp. 105-10. Unfortunately, a significant portion of the left side of the text has been truncated in my photocopy of the last page of the second article. It’s a shame, because Fr Florovsky has some comments there that I’d very much like to use in a future post.

There is a bibliography in the back of the SVS Press biography of him. Perhaps that would clarify the source for "The New Vision of the Church's Reality." If I think of it when I go to the library today, I'll check.

Also, for those interested in Florovsky, there's also an article posted right now on the website for the St Vladimir's Theological Quarterly, taken from the inaugural issue. It's an inspiring call to re-vivify Orthodox theology.

Thanks, Taylor, that'd be great. I read that book a few years ago, and I really wish I had a copy.

And thanks for the link too.

Hi Aaron - I have this reference somewhere, but I've just looked in several likely places to no avail. It'll have to wait till after Pascha, now. Blessed Pascha.

Hi Aaron, I couldn't find an entry in the SVS Press book for 'The Message of Chalcedon'. It could be that it was part of a larger article with a different title.

Aaron - I finally located my copy of this article, and... no reference info! :-( Sorry.