Elder Porphyrios on the Nightingale's Song 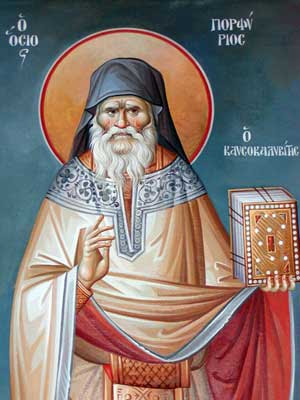 In his book on Orthodox theology and aesthetics, Chrysostomos Stamoulis, one of my professors at Aristotle University of Thessaloniki, has called my attention to a lovely passage in the Life & Discourses of Elder Porphyrios the Kapsokalyvite, [1] and this evening it set me to looking through the English edition of this work and just enjoying the Elder’s reflections a bit. I will first quote the passage Stamoulis refers to:

One morning I was walking alone in the virgin forest. Everything, freshened by the morning dew, was shining in the sunlight. I found myself in a gorge. I walked through it and sat on a rock. Cold water was running peacefully beside me and I was saying the prayer. Complete peace. Nothing could be heard. After a while the silence was broken by a sweet, intoxicating voice singing and praising the Creator. I looked. I couldn’t discern anything. Eventually, on a branch opposite me I saw a tiny bird. It was a nightingale. I listened as the nightingale trilled unstintingly, its throat puffed out to bursting in sustained song. The microscopic little bird was stretching back its wings in order to find power to emit those sweetest of tones, and puffing out its throat to produce that exquisite voice. If only I had a cup of water to give it to drink and quench its thirst!

Tears came to my eyes—the same tears of grace that flowed so effortlessly and that I had acquired from Old Dimas [an old Russian Athonite hermit]. It was the second time I had experienced them.

. . . ‘Why did they [nightingales] puff out their throats to bursting?’ The purpose was worship, to sing to their Creator, to worship God. That’s how I explained it.[2]

Later in the book, Elder Porphyrios refers again to this experience in a chapter called, ‘On Creation’. [3] At the end of the chapter, he writes:

Listen and I’ll recite my poem to you. It’s by Lambros Porphyras. [4] This captures my present state; I’ve got it constantly before me. It fits with my life.

If only the pine trees that cover the hillside would give
me a pileof their numberless branches,
then finding a spot in a hollow beside them,
I’d build there my dwelling, a hut low and lonely.

If only’t were summer-time, then they could give me
a couch of their dry leaves, pine needles, to lie on,
and then I would join in the song of the pine trees,
their chorus at dawn-break of whispers and rustlings.

And nothing beyond this would I wish thereafter.
And when full of joy from this life I’d be parted,
again they would lend me a few of their brances
and make me a bower, a bed everlasting. [5]

These passages in Elder Porphyrios remind me [6] of an article (here) that I had the misfortune of reading earlier today about three female ‘ministers’ who have written a book about ‘taking spirituality outdoors’. At one point, one of them (a female rabbi) is paraphrased as saying, ‘Think how many millennia it has taken, Korngold adds, for believers to return outside and remember that long before God was caged in a synagogue, church, mosque or book, God spoke to humankind from mountains, sands, seas and forests.’ To note first this woman’s apparently abysmal ignorance of the history of spirituality, I would point out that the passages from Elder Porphyrios are, in Stamoulis’s words, ‘reminiscent of similar attitudes, manifestations of a way of being, of ascetics of the ancient Church, and which reveal him as a genuine successor and follower of such a tradition.’ [7] Second, there is the powerful depth of the Elder’s experience and expression of this truth, as compared with the glib superficiality of the women in the article. 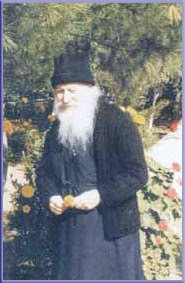 But finally, the article reminds me that the Elder sees no contradiction between this experience in nature and similar, if not more powerful encounters with God in context of the temple. In a touching passage about his first days on the Holy Mountain, Elder Porphyrios writes:

One night there was a vigil service at the Kyriakon, the church of the Holy Trinity. This was very shortly after I had arrived, during the first few days. Our skete was celebrating its feast day. My elders left in the early evening for the church and left me in the hermitage to sleep. I was young and they thought I might not be able to stay awake until the morning when the vigil would end.

After midnight Father Ioannikios came and woke me up. ‘Wake up and get dressed,’ he said, ‘and we’ll go to the church.’

I jumped up at once and in three minutes we had arrived at the Holy Trinity church. He ushered me into the church first. It was the first time I had been inside. I was overwhelmed! The church was filled with monks standing upright in an attitude of reverence and attentiveness. The chandeliers shed their light everywhere, lighting up the icons on the walls and on the icon stands. Everything was bright and shining. The little oil lamps were lit, the incense exuded fragrance and the singing resonated devoutly in the otherworldly beauty of the night. I was overcome with awe, but also with fear. I felt that I was no longer on earth, but that I had been transported to heaven. Father Ioannikios nodded to me to go forward and kiss the icons. I remained motionless. ‘Take my hand, take my hand!’ I started to shout. ‘I’m scared!’ He took me by the hand and, gripping him tightly, I went up to venerate the icons. It was my first experience. It was engraved on my innermost soul. I will never forget it. [8]

There is no contradiction of course, because what the monks were doing in and through the physical structure of the temple was the human equivalent of the nightingale’s song. As the Elder notes in the chapter ‘On Creation’, while the nightingales are indeed praising their Creator and expressing their purpose by displaying ‘the greatness of God and His providence’, ‘God’s purposefulness is expressed differently in us, in mankind. We have freedom and reason.’ [9] It is with the aid of these gifts that we produce art—our nightingale song. Archimandrite Vasileios of Iveron has written:

There is a reverence for man, a deep knowledge and development of the capacities concealed within him. And the grace with which matter is filled is revealed.

The same spirit prevails and is manifested everywhere. In the whole architecture of the Mountain (in the way Monasteries, Sketes, Cells and Huts have been formed and established in different places). In the way the programme [the daily schedule] is organised. In the expression of the icons. In poetry. In the music of the chant. In the architecture of words and life. [10]

Thus, the temple, in the Orthodox view, is hardly a cage to imprison God, but rather ‘a house for the name of the Lord God of Israel’ (II Chron. 6:7), an expression of praise and beauty through human art.

[2] Elder Porphyrios the Kapsokalyvite, Wounded by Love: The Life & the Wisdom of Elder Porphyrios, ed. Sisters of the Holy Convent of Chrysopigi, tr. John Raffan (Limni, Evia, Greece: Denise Harvey, 2005), pp. 31, 32. Stamoulis stops at the end of the second paragraph, but I thought I should add that last bit to clarify my further observations.

Lambros Porphyras, 1879-1932, was born in Chios but spent most of his life in the port of Piraeus. A recluse, he mixed only with a few men of letters and with humble fishermen and workmen, his favoured drinking companions. His poetry, refined and musical, is pervaded by a sincere sadness. His soft, perhaps sentimental symbolism shows the influence of Verlaine and Moreas. [This note is based on ‘Greek Poetry from Homer to Seferis’ by Prof.C.Trypanis.]

[6] Of course, although the two differ notably, the nightingale story also reminds me of the incredible vision Elder Joseph the Hesychast experienced upon hearing what sounded like a bird-song on the mountain one time—‘That mysterious voice sang again, and at that point my senses stopped and my mind was “caught up”, going outside myself, in an infinite expanse of light without bounds or measure’ (Elder Joseph of Vatopaidi, Elder Joseph the Hesychast: Struggles, Experiences, Teachings (1898-1959), tr. Elizabeth Theokritoff (Mt Athos, Greece: Great & Holy Monastery of Vatopaidi, 1999), p. 76).

[10] Archimandrite Vasileios of Iveron, What is Unique about Orthodox Culture, tr. Elizabeth Theokritoff (Montréal: Alexander, 2001), p. 20.
Posted by Aaron Taylor at 12:00 AM