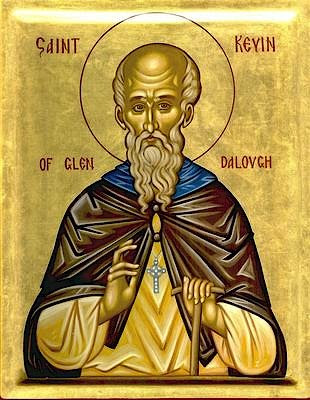 Today, 3 June on the Church’s calendar, we celebrate the memory of St Kevin (Coemgen) of Glendalough (c. 498-618). Edward Sellner tells us that St Kevin ‘stands in the forefront of the great company of saints of Ireland’ (Wisdom of the Celtic Saints [Notre Dame, IN: Ave Maria, 1993], p. 157). His future was prophesied by St Patrick himself as well as Find mac Cumaill. Furthermore—

At the time of Coemgen’s birth no pains of labour nor pangs of childbearing came to his mother, as to other women, for innocent, faithful, righteous was the offspring that she bore. And the high King of righteousness, the King of heaven, sent twelve angels with golden lamps to his baptism. And the angels gave him the name Coemgen (fair birth), that is beauteous shining birth. (Bethada Náem nÉrenn: Lives of Irish Saints, Vol. II—Translations, Notes, Indexes, ed. and trans. Charles Plummer [Oxford: Clarendon, 1922], pp. 121-2)

St Kevin was taken to St Cronan of Leinster to be baptised, who explained to his nursemaids ‘this was an appropriate name for him by the will and ordinance of God’, for (Plummer, p. 151)—

This is the name which God fashioned in heaven,
Which shall cleave to the child;
Consider, O women of fair attendance,
That this is his baptismal name, Coemgen.

Twelve angels, as was fitting,
God sent from on high in his honour;
And a taper with pure flame
Was in the hand of each angel.

After seven years, the young St Kevin was sent, at the command of an angel, to ‘a convent of monks to be taught, and instructed in manners’, where he stayed until he was old enough for ordination, ‘and after receiving ecclesiastical orders, he meditated in his mind to forsake the world and the society of men, and to lead a solitary eremitic life . . .’ (p. 152). Guided by an angel, he came to the slope of the lakes of Glendalough, where St Patrick had prophesied that he would flourish, and there lived in extreme asceticism on wild nuts and herbs, sleeping on rocks, and imitating the Saints of old, of whom St Paul wrote, ‘they wandered about in sheepskins and goatskins; being destitute, afflicted, tormented; (Of whom the world was not worthy:) they wandered in deserts, and in mountains, and in dens and caves of the earth’ (Heb. 11:37-8). ‘Great was his courage afterwards in separating from the glory and beauty of the present life, and remaining in solitude listeing to the converse of the angel who ministered to him’ (Plummer, p. 122). Sellner quotes one Life as saying ‘the branches and leaves of the trees sometimes sang sweet songs to him, and heavenly music alleviated the severity of his life’ (Sellner, p. 157), for ‘he would pray long and fervently to God’, and (Plummer, p. 152)—

Seven years in tangled deserts
Was he in gentle sort
Dwelling beside his people
Without food in Cáel Faithe.

Finally, St Kevin was discovered by a farmer, and the farmer’s sons dragged him out of his hollow and prevailed upon him to live openly, in a monastery and with disciples. According to Sellner:

At Disert-Coemgen, where Refert Church now stands, Kevin made a settlement for the disciples who joined him. He eventually moved his community to the glen ‘where two sparkling rivers meet’. Here at Glendalough he made his permanent foundation. The site, south of Dublin, is still popular with tourists and pilgrims. Located in the shadows of the Wicklow Mountains and surrounded by lakes and forests, it is very beautiful. (pp. 157-8)

St Kevin’s disciple, Solomon, tells us that it is an extraordinary pilgrimage site indeed (Plummer, p. 156):

Great is the pilgrimage of Coemgen,
If men should perform it aright;
To go seven times to their fair is the same
As to go once to Rome.

It was at this point that one of the more well-known incidents of St Kevin’s life occurred. It was his custom to spend Lent in ‘a wattled pen, and a grey flag-stone under him as a bed, and his only food was the music of the angels’—

And one Lent when he was acting in this way, a blackbird came from the wood to his pen, and hopped on his palm as he lay on the flag-stone with his hand stretched out; and he kept his hand in that position, so that the blackbird built its nest in it, and hatched its brood. The angel came after this to visit Coemgen, and bade him leave the penance in which he was, and return to the society of men once more. (Plummer, p. 155)

Alas! a pain greater than the requital
My hand like a log under the blackbird;
The blood of His hands, of His side, of His feet
The King of heaven shed for my sake.

Of course there are many wondrous stories told of St Kevin. To prevent this post becoming too long, I shall give just one more of them:

It occurred to the King of Úi Faelain to send a son who had been born to him to Coemgen to be baptized; and he sent word to him to keep the boy with him to be fostered. And the reason why he sent him to him was because every son that had been previously born to him had been destroyed by the bright people or fairy courts. And when the infant came to Coemgen to be baptized, a fairy witch, named Caineog, with her attendant women followed the infant, bent on destroying it, as they had destroyed every other son which the king of Úi Faelain had had previously. When Coemgen noticed this, he cursed the women, and thereupon they were turned into stones, and they remain thenceforth in the form of stones on the brink of the lough which is in the glen. (Plummer, pp. 158-9)

St Kevin fell asleep in the Lord in 618, according to some at the age of 129. As the third sticheron (Tone 6) for ‘Lord I have cried’ in Reader Isaac Lambertson’s wonderful Akolouthia for the Saint says:

The years of man's life are threescore and ten, or mayhap fourscore if he be in strength, but any more is toil and travail; yet our Savior granted sixscore years unto His favored one, wherein to exalt His holy name.

According to Sellner, ‘He was a very popular saint in the Middle Ages. Gerald of Wales once described Kevin as “a great confessor of the faith, and abbot”. As the story of the blackbird reveals, Kevin was especially associated with the quality of patience’ (p. 158). Kevin Edgecomb, whose patron St Kevin is, has posted in its entirety one of the Lives in Plummer's translation here. Many years on your Old Calendar nameday, Kevin! I shall conclude with the Doxasticon from Vespers for the Saint:

Like as the two lakes of Glendalough water their vale, so was the glorious Kevin nourished with the twin springs of Orthodox doctrine and ascetic endeavor. Wherefore, all who honor him become like trees planted by the streams of the grace which dwelt in him, so that, nurtured thereby, their leaf doth not fall, and they prosper exceedingly in the Spirit, bringing forth in due season the goodly fruits of virtue and devotion.

God is glorified in His Saints!

PS My middle name is Patrick!

Many years to our beloved friend and co-conspirator! Срећан имендан! :-)

A trivial note: I used to drink beer with Ed Sellner when I lived in St. Paul. He let me take a bunch of classes at St. Cate's History of Christian Spirituality night MA program when I was still an undergrad. Very interesting fellow. He is a big fan of both CS Lewis and Tillich. A great conversationalist.

Owen> Neat! I like his book, though I wish it were a bit clearer in distinguishing between Sellner's words and those of his sources.

By the way, I never knew it was possible to to be a fan of both Lewis and Tillich. As an undergrad, I sat through a seminar on Tillich's Systematic Theology, and it was one of the most grueling courses of my career, not least because of the text.

I hate to keep doing this to you, but... Ed Sellner and I were housemates for a few months, at the St Theosevia Centre in Oxford. He was on sabbatical at the time, and ended up publishing his journal of the months he stayed there. (I think it's called "Soul Searching.") He writes quite a bit about Donald Allchin and Sr Benedicta, and even mentions My Mediocrity a time or two. (I was a layman at the time.)

Good grief! Will it never end!

And I, too, am an admirer of both men. I don't know Tillich's "ST," but his "Dynamics of Faith" is certainly one of the most important books in my own theological/ intellectual/ spiritual formation, and one I never tire of recommending.

Sorry, Theophylestate, I hope you weren't offended! I just meant that Lewis's writing is so marked by its lucidity, while I found the ST to be exactly the opposite.

I also found what I knew of Tillich's personal foibles so troubling that it was difficult to take him seriously as a theologian.

Be of good cheer, Aaron: I'm not that easily offended!

A friend told me this story: Many years ago he traveled to Italy and happened to be there with- of all people- His Grace Bishop Savas. While in Rome they read in La Stampa that the Pope would be blessing all pilgrims from his balcony in St. Peter's Square. On a whim my friend asked His Grace if he would be interested in going to St. Peter's Square to see Pope John Paul. His Grace responded enthusiastically "Why I haven't see ol' Karol Józef in years! Would you like to meet him?"

My friend knew Bishop Savas was pulling his leg. "Uhh, no that's okay."

"Suit yourself," he replied.

They arrived in St. Peter's Square and were soon surrounded by thousands of faithful Catholics. It wasn't long before my friend realized Bishop Savas was gone. Soon the Pope appeared on his balcony and the crowd went nuts. And standing next to the Pope was none other than Bishop Savas himself.

An Italian man next to my friend nudged him with his elbow. He was squinting and pointed to the balcony.

"Pardone Siñore, ehh... who is that man standing next to Bishop Savas?"

This may be apocryphal.

Justin> This story is beginning to seem plausible!

Thanks for sharing this post, Aaron. I think Kaylen and I will print and frame that Doxasticon. Very beautiful.