'With Songs We Hymn Thy Divine Memory'—Apostle Barnabas 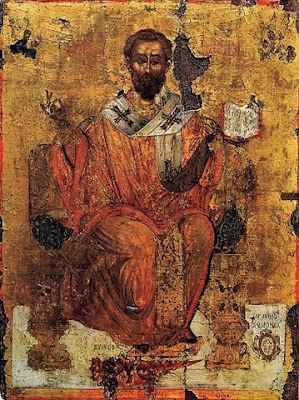 This morning, 11 June, we celebrated the memory of the Apostle Barnabas († 61 AD). I don’t have much material to draw on about St Barnabas, aside from the Acts of the Apostles (I shall quote the KJV) and the Prologue (St Nicholas [Velimirović], The Prologue from Ochrid, Part Two: April, May, June, trans. Mother Maria [Birmingham: Lazarica, 1986]; see the Sebastian Press translation of today’s Prologue here). But there are one or two interesting things I’d like to mention, and besides, St Barnabas is the patron Saint of my reposed friend, Hieromonk Barnabas of Karakallou. As a small tribute to Fr Barnabas, I offer this brief post.

36 And Joses, who by the apostles was surnamed Barnabas, (which is, being interpreted, The son of consolation,) a Levite, and of the country of Cyprus,

37 Having land, sold it, and brought the money, and laid it at the apostles’ feet.

Concerning the interpretation of his name, the Prologue says he was called this ‘because he had a rare gift for comforting men’s souls’ (p. 299). According to tradition, St Barnabas was a fellow student of Torah with St Paul ‘at the feet of Gamaliel’ (Acts 22:3). (Rabbi Gamaliel I, or ‘the Elder’, was a famous 1st-century Pharisee and Jewish sage traditionally believed to have converted to Christianity.) St Nicholas gives us a touching account of their relationship:

The two young men, Barnabas and Paul, were friends and went together to Gamaliel’s school. When Barnabas became a Christian, he persistently and with tears prayed to God that he would enlighten Paul’s understanding and turn his heart, that he too might become a Christian. Barnabas often spoke to Paul about Christ the Lord, but Paul mocked him and thought him misguided. But the gracious Lord did not leave Barnabas’s prayer unfruitful. He appeared to Paul, turned him from the false way and set him on the way of truth. The converted Paul fell at the feet of his friend and cried: ‘O Barnabas, teacher of the truth, now I am convinced of the truth of what you said to me about Christ!’ Barnabas wept for joy and embraced his friend. The friend saved his friend’s soul by his fervent prayers. If Barnabas had succeeded in making Paul Emperor of Rome, he would have done less than he in fact did by bringing him to the truth by his prayers. (p. 300)

Thus, when St Paul returned to Jerusalem after his conversion, it was St Barnabas who introduced him to the other Apostles (Acts 9:27). He was sent by the Church of Jerusalem to Antioch, where he ‘exhorted them all, that with purpose of heart they would cleave unto the Lord. For he was a good man, and full of the Holy Ghost and of faith: and much people was added unto the Lord’ (Acts 11:23-24). Thus, in Acts 13:1, St Barnabas is listed among the early ‘prophets and teachers’ of the Church of Antioch, where St Paul laboured with him for a year, and in the next verse we read, ‘As they ministered to the Lord, and fasted, the Holy Ghost said, Separate me Barnabas and Saul for the work whereunto I have called them’ (Acts 13:2).

Thus Ss Barnabas and Paul set out on an extensive missionary journey through Cyprus and Asia Minor, where they brought many to Christ (see, for example, Acts 13:43). The two Apostles participated together in the Council of Jerusalem, and they were sent back to Antioch with a letter calling them ‘our beloved Barnabas and Paul, men that have hazarded their lives for the name of our Lord Jesus Christ’ (Acts 15:25-26). Sadly, however, when St Paul asked St Barnabas to accompany him on another journey and the latter wanted to bring along his cousin, St Mark the Evangelist, there was a bitter dispute, and they went their separate ways, St Barnabas taking St Mark with him to Cyprus, and St Paul accompanied by St Silas (Acts 15:37-41).

St Barnabas is not mentioned again in the Acts of the Apostles, however, tradition has passed down to us the story of his fate, both before and after his death. According to the Prologue:

All accounts agree that he was the first to preach in Rome and in Milan. He suffered at the hands of the Jews on the island of Cyprus and was buried by Mark at the western gate of the city of Salamis, holding a copy of the Gospel of Matthew which he had transcribed with his own hand. His grave remained unknown for several centuries, but when many people had been healed of sickness in that place, it became known as ‘the place of healing’. In the time of the Emperor Zeno, the Apostle appeared three times, on three successive nights, to Archbishop Anthemius of Cyprus, and revealed the whereabout of his grave. This revelation by the Apostle took place just at the time when Peter, the power-hungry Patriarch of Antioch, was seeking to bring the Cypriot Church under his jurisdiction. After the revealing and finding of the miraculous relics of the holy Apostle Barnabas, it was established that the Cypriot Church, as an apostolic foundation, should be independent, and thus the autocephaly of the Church of Cyprus was finally confirmed. (p. 299)

For more details of the martyrdom and finding of St Barnabas’s relics on Cyprus, see this highly informative post by John Sanidopoulos, at Mystagogy. Sanidopoulos also includes the story of a modern miracle worked by the Apostle at his Mausoleum in Famagusta, North Cyprus:

Marios Stylianos, forty years old, from the Turkish occupied Ammochosto and who currently lives in Lefkosia, was left a parapalegic after surgery on his neck, for which he traveled abroad. He related himself that he had seen in a dream the Apostle Barnabas, who told him to write a book about his life and as soon as it was finished, to go to his tomb and he would walk. Marios, following his dream, went to the tomb of the Apostle Barnabas in the occupied Monastery of the same name near Ammochosto, and after the Liturgy was finished at the tomb, said that he saw the Apostle Barnabas approach him holding the Gospel and extending him his right hand. Then he made a cry and felt something like an electric current flowing through him, and he continued to get up from his wheelchair and walked, though supported.

Here is the Kontakion for the Apostle Barnabas in Tone 2:

Thou wast a most true servant of the Lord, and, as the foremost of the seven­ty apostles, didst shine forth in thy preaching with Paul, proclaiming Christ the Savior unto all; wherefore, with songs we hymn thy divine memory, O Barnabas.

Holy Apostle Barnabas, pray for us and for the repose of the servant of God, Hieromonk Barnabas!
Posted by Aaron Taylor at 9:24 PM