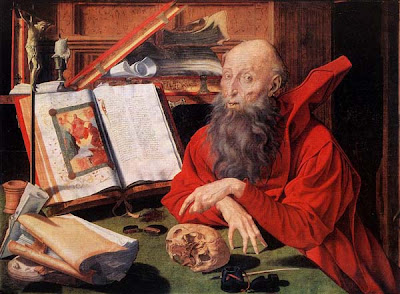 Looking for materials about St Jerome on Google Books, I came across the following sobering factoid in Megan Hale Williams’s The Monk and the Book: Jerome and the Making of Christian Scholarship (Chicago: U of Chicago, 2006):

The scale of expenditure involved in the creation of Jerome’s library can be readily appreciated when we consider a single example of a book that he must have possessed: the Hexapla. The writing alone would have cost approximately 75,000 denarii. Unfortunately, the passage of the Price Edict regulating the price of papyrus has not survived, but the parchment needed for a copy written on that relatively luxurious material would have cost an additional 75,000 denarii. Even in Palestine, copying the Hebrew column would presumably have required hiring an additional scribe, or else a more skilled one, capable of writing a good bookhand in both languages. Either would add to the expense. Furthermore, the Hexapla’s complex layout would surely have increased the price of a copy. The minimum cost of a complete copy of the Hexapla, therefore, would have been about 155,000 denarii, sixty times the price of the kind of a manuscript typical of a scholar’s working library and equivalent to at least two years’ earnings for a successful grammarian. (p. 175)

I figured that it would be hard to translate the first comparison—60 times the cost of a typical scholarly book—into a modern equivalent because of the overall reduction in cost of books. But as for the second, I would think the equivalent might be a $100,000 book. I eagerly read these figures to my wife just in case she felt I was spending too much on books.
Concerning St Jerome, though, it is interesting that despite such an apparent extravagance, he had little patience for those who valued externally fancy or luxurious books. Williams quotes the preface to his translation of Job:

Let those who want them have antique volumes, or books written on purple parchment in gold and silver ink, or in what the vulgar call 'inch-high' [uncialibus] letters, so that they are burdens rather than books, so long as they let me and mine have our wretched pamphlets and our copies not so much beautified, as corrected. (qtd. in Williams, p. 181)

Williams concludes, 'Jerome's scorn for those who prefer luxury Bibles allows him to represent his own mode of literary culture, characterized by books 'not so much beautified as corrected', as properly ascetic' (p. 181). His insistence in this regard reminds me of St Paisius (Velichkovsky), who laments to Archimandrite Theodosius of the St Sophronius Hermitage that the Slavonic translations of the patristic books 'have remained in the ancient translation, not having been corrected even up to now from the Greek sources—and through unskilled copyists they have acquired innumerable mistakes, and it is absolutely essential that these books should be corrected from the sources' (Schema-monk Metrophanes, Blessed Paisius Velichkovsky: The Man Behind the Philokalia, trans. Hieromonk Seraphim [Rose] [Platina, CA: St Herman of Alaska Brotherhood, 1994], p. 184). Now if only modern Orthodox would recover such zeal for correction!
Posted by Aaron Taylor at 11:44 AM

Here is some more autokeraphonia: my translation of all the Vulgate Prologues.

I rendered the passage from the Prologue to Job "Let whoever will to keep the old books, either written on purple skins with gold and silver, or in uncial letters, as they commonly say, more loads of writing rather than books, while they leave to me and mine to have poor little leaves and not such beautiful books as correct ones."

St Jerome's entire library was burned, just a few years before he died, when a mob of Pelagius' supporters stormed his monastery, even killing one (or more, I can't recall) of the monks. Shameful.

Also, it is absolutely unlikely that Jerome had a full copy of the Hexapla, which ran into something like 250 volumes, according to one estimate. He almost certainly had individual copies of the Sixth Column, Theodotion, Symmachus, Aquila, the LXX proper (which we call the Old Greek today), and Hebrew and Aramaic copies. The only known copy of the full Hexapla prepared by Origen was in the Pamphilian-Origenian library in Caesarea, which was entirely burned by the Arabs when they took the city, as punishment for having resisted. Classy.

Sorry! Just uncritically passing along what Williams said! Thank you for the clarification though, as well as for the link to your translations.

As for the burning of St Jerome's library, at least they burned it because they wanted to, and not because of their sinful nature!

Mr. Edgecomb, I thank you for introducing me to a wonderful (and, in my case, as I'm sure Aaron can attes, useful) word, autokeraphonia, as well as for the link.

Your Grace is very welcome! And gracious!