'Star Among the Stars'—St Cyril of Alexandria 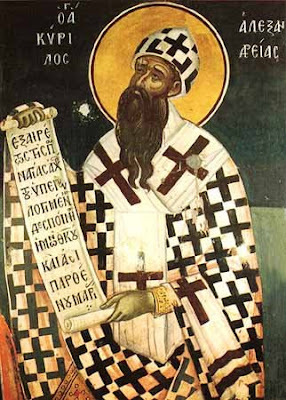 Today, 9 June on the Church’s calendar, in addition to St Columba we celebrate the memory of St Cyril of Alexandria (c. 378-444), one of the great theologians and Fathers of the Church. I have already posted at such length on St Columba that I don’t think I’ll try to do a proper post for St Cyril, but I would like to say one or two things.

Unfortunately, I know relatively little about St Cyril in comparison with some of the other Fathers. Fr John McGuckin calls him ‘one of the most important theologians on the person of Christ in all Greek Christian writing’ (‘Cyril of Alexandria’, The SCM Press A-Z of Patristic Theology [London: SCM, 2005, p. 93), and Fr Georges Florovsky compares his significance ‘in the history of Christian thought with that of St Augustine’ (The Byzantine Fathers of the Fifth Century, trans. Raymond Miller, et al., Vol. 8 in The Collected Works of Georges Florovsky [Vaduz: Büchervertriebsanstalt, 1987], p. 262). The controversies of three Œcumenical Councils revolve around the Christology of St Cyril.

But sadly, an image of St Cyril as an irascible, even violent, man, hungry for power at all costs, seems to have become the ordinary one outside of the Orthodox Church (and sometimes within it!) today. Most recently, a number of books, including a number of novels (!), seem to have seized on the loose connection of St Cyril with the murder of the Neoplatonist philosopher Hypatia (whose current popularity seems out of proportion with her actual achievements) in Alexandria in 415. In this connection, Carl Sagan has, with no evidence, even held St Cyril responsible for the destruction of the Library of Alexandria, a catastrophe that it seems to me is most probably attributed to Julius Caesar (following Plutarch, ‘Cæsar’, The Lives of the Noble Grecians and Romans, trans. John Dryden, rev. Arthur Hugh Clough [NY: Modern Library, n.d.], p. 883—on this subject, see the wonderful article here). Here is an example of an Anglican trying his best to apologise for St Cyril, but still falling prey to the usual characterisations (I love the cabdriver’s arguments though!).

I think St Cyril needs a good, Orthodox biographer, learned but pious. Concerning his supposed irrascibility, St Cyril himself wrote, ‘I love peace. There is nothing that I detest more than quarrels and disputes. I love everybody, and if I could heal one of the brethren by losing all my possessions and goods, I am willing to do so joyfully; because it is concord that I value most’ (qtd. in Christopher Hall, Learning Theology With the Church Fathers [Downers Grove, IL: IVP, 2002], p. 84). Susan Wessel finds it highly ‘unlikely that Cyril, in the early years of his episcopacy, found Hypatia’s paganism overtly threatening’ (Cyril of Alexandria and the Nestorian Controversy: The Making of a Saint and a Heretic [NY: Oxford U, 2004], p. 54). She points out that his even more controversial uncle Theophilus probably ‘enjoyed a cordial relationship with Hypatia’ (p. 54). Indeed, upon closer inspection it seems odd to imagine that St Cyril should have believed that the brutal murder of one of his friends would more kindly dispose the prefect toward the bishop. One would think it far more plausible to accept, as Wessel seems to, that the act was the result of ‘the hostility and jealousy of a few militant Christians who were ready to support their bishop at any cost’ (p. 53).

And then there is the profound theology of the man. Vladimir Lossky writes, ‘In the fifth century Alexandrian theology finds its most perfect and most orthodox expression in the thought of St Cyril of Alexandria (370-444), dominated by the idea of deification as the supreme goal of created beings’ (The Vision of God, trans. Asheleigh Moorhouse [Crestwood, NY: SVS, 1983], p. 97). A little further on, Lossky explicates St Cyril’s theology of deification:

The perfect knowledge of God which is attained in the age to come is no longer the ultimate goal, but one aspect of the final deification or of ‘the spiritual world of delights’ (τρυφῆς δὲ τρόπος πνευματικός ), as St Cyril says. We shall know Christ who will shine in us by the Holy Spirit, because we shall have ‘the mind of Christ’ (νοῦς Χριστοῦ) of which St Paul spoke, and this mind of Christ is the Holy Spirit present in us. Progressive deification, accompanied by an ever more perfect knowledge of God, is accomplished in the sacramental life. ‘Perfect gnosis of Christ,’ says St Cyril, ‘is obtained by baptism and the illumination of the Holy Spirit.’ The body takes part in this life in union with God, especially in the sacrament of the Eucharist, the corporeal union with Christ.

. . . Like St Gregory of Nazianzus he often speaks of illumination (φωτισμὸς) and if knowledge is superseded in the age to come, this means that for him partial knowledge—‘in riddles and in a mirror’—will be eclipsed there by the illumination of Christ which will fill our minds with divine and ineffable light (θείου τινὸς καὶ ἀπορρήτου φωτός). ‘“We shall see God as he is.” This means that with uncovered face and untrammelled thought we shall have in our intellect (ἐννοήσομεν) the beauty of the divine nature of the Father, while contemplating the glory of the One who has shone forth from him’ (τὴν τοῦ πεφηνότος ἐξ αὐτοῦ θεωρήσαντες δόξαν). (pp. 99-100)

And here is a small excerpt from St Cyril’s First Letter to Nestorius (in William C. Placher, Readings in the History of Christian Theology, Vol. 1: From Its Beginnings to the Eve of the Reformation [Philadelphia: Westminster, 1988], p. 72):

We confess that He is the Son, begotten of God the Father, and Only-begotten God; and although according to his own nature he was not subject to suffering, yet he suffered for us in the flesh according to the Scriptures, and although impassible, yet in his Crucified Body he made his own the suffering of his own flesh; and by the grace of God he tasted death for all: he gave his own Body thereto, although he was by nature himself the life and the resurrection, in order that, having trodden down death by his unspeakable power, first in his own flesh, he might become the first born from the dead, and the first-fruits of them that slept. . . .

Finally, I finish with the ‘Hymn of Praise’ for St Cyril composed by St Nicholas (Velimirović) for today in the Prologue:

Saint Cyril, unwavering
By his faith, amazes the universe,
With the honorable Cross, the hero encompassed himself
Against the enemies of the Church, took up arms,
Against the Jews, arch-enemies of the Cross,
And attacked the Novatianists,
Who took pride in themselves
To mercy, they placed a boundary,
Condemned sinners, prior to the Judgment,
To the power of God, they denied miracles.
But Cyril, shown the most
When he rose up against Nestorius,
The destroyer of the Orthodox Faith
The blasphemer of the Mother of God,
Cyril, the Mother of God, helped,
So that he overcame every diabolical power,
Holy Church cleansed of chaff,
All with the help of the Virgin Mother of God.
Cyril was a knight of Orthodoxy,
That is why the Church glorifies Cyril
And to him, prays without ceasing,
From diabolical uprisings, to protect us,
O Cyril, star among the stars,
By your prayers, help us.

I think that Fr John McGuckin's portrayal of St Cyril in his Saint Cyril of Alexandria and the Christological Controversy goes a long way towards filling the need for a good Orthodox biography of the Saint, learned but pious.

I second Esteban's assessment. McGuckin's book is very good. It doesn't hide St. Cyril's less than stellar moments, but it also does not paint him as bad as many like to of late. It is reverent, and it makes the (unpopular in much of today's Orthodox Church, at least in the West) argument that the Copts and Armenians were wrong and did not read St. Cyril correctly - whatever their theology may be today when compared to what it was in the first millenium. It also provides a number of first ever English translations of St Cyril's works.

I left it without the pit in the stomach feeling I had after reading a similarly historical account of St. John of Kronstadt - haven't really recovered from that. I left McGuckin's book feel rather good about the saint and the Orthodox position regarding Chalcedon.

What, has everyone read this book but me? Okay, already!

Actually, I looked it up on Google Books and read a good little chunk earlier, and I liked what I saw. It would help the piety side a little if he would have referred to him as 'Saint Cyril' throughout, but maybe that's asking too much from a 'patristics scholar', even if he is an Orthodox priest writing for an Orthodox publisher. Anyway, it's a pet peeve I've managed to inherit from my spiritual father.

I definitely liked the way Fr McGuckin dispatched the whole murder of Hypatia thing. I hate that particular slander with a holy passion.

I tend to agree there, Aaron, but bear in mind that he did not write the first edition of this book for an Orthodox publisher, but for Brill!

(Plus, do recall how often St Nikolaj Velimirović refers to Saints only by their first name in the Prolog! That said, I could never do such a thing, myself.)

Yes, but this particular Orthodox publisher DID publish one theologian's complaints about St John Chrysostom's 'intolerable smugness' and unforgiveable shamelessness, or another's claim that St Dionysius the Areopagite's 'magical clericalism’ was ‘overcome by theologians like Maximus and Palamas'. A proud tradition of 'punk patristics'!

Punk patristics! Is that your phrase?

No, Your Grace, I wish I could take credit. That is a favourite expression of one of Esteban's heroes, Archbishop Chrysostomos of Etna (of the Old Calendarists under Metropolitan Cyprian of Fili).