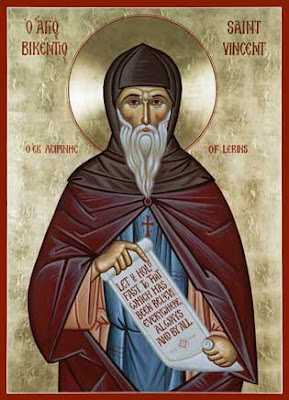 This morning, 24 May on the Church’s calendar, we celebrated the memory of St Vincent of Lérins (c. 450). A monk of the island monastery of Lérins, which Fr Seraphim (Rose) has called the ‘great seedbed of Orthodox monasticism in 5th-century Gaul’ (‘A Prologue of the Orthodox Saints of the West’, Vita Patrum: The Life of the Fathers, by St Gregory of Tours, trans. Fr Seraphim [Rose] and Paul Barlett, ed. Fr Seraphim [Rose] [Platina, CA: St Herman of Alaska Brotherhood, 1988], p. 18), St Vincent is famous almost entirely for his Commonitory, an exposition of the catholic, Orthodox faith which he describes as an aid to his memory of ‘the things which I have truthfully received from the holy Fathers’ (Comm. I, NPNF).

St Eucherius of Lyons calls him ‘a jewel shining with the brilliance of his spiritual life’ (‘In Praise of the Desert: A Letter to Bishop Hilary of Lérins’, trans. Charles Cummings, rev. Jeffrey Burton Russell, The Lives of the Jura Fathers, trans. Tim Vivian, et al. [Kalamazoo, MI: Cistercian, 1999], p. 214). Here is the account of his life in Gennadius, almost the sole source of information about St Vincent (from De viris illustribus lxiv, NPNF):

Vincentius, the Gaul, presbyter in the Monastery on the Island of Lerins, a man learned in the Holy Scriptures and very well informed in matters of ecclesiastical doctrine, composed a powerful disputation, written in tolerably finished and clear language, which, suppressing his name, he entitled 'Peregrinus against heretics'. The greater part of the second book of this work having been stolen, he composed a brief reproduction of the substance of the original work, and published in one [book]. He died in the reign of Theodosius and Valentinianus.

One of the many eloquent passages of the Commonitory is St Vincent's description of ‘the notes of a true Catholic’, in Chapter XX:

This being the case, he is the true and genuine Catholic who loves the truth of God, who loves the Church, who loves the Body of Christ, who esteems divine religion and the Catholic Faith above every thing, above the authority, above the regard, above the genius, above the eloquence, above the philosophy, of every man whatsoever; who sets light by all of these, and continuing steadfast and established in the faith, resolves that he will believe that, and that only, which he is sure the Catholic Church has held universally and from ancient time; but that whatsoever new and unheard-of doctrine he shall find to have been furtively introduced by some one or another, besides that of all, or contrary to that of all the saints, this, he will understand, does not pertain to religion, but is permitted as a trial, being instructed especially by the words of the blessed Apostle Paul, who writes thus in his first Epistle to the Corinthians, ‘There must needs be heresies, that they who are approved may be made manifest among you’ (I Cor. 2:9): as though he should say, This is the reason why the authors of Heresies are not forthwith rooted up by God, namely, that they who are approved may be made manifest; that is, that it may be apparent of each individual, how tenacious and faithful and steadfast he is in his love of the Catholic faith.

Of course, this passage harkens back to the most celebrated passage of the Commonitory, the famous ‘Vincentian Canon’ in Chapter II: ‘Moreover, in the Catholic Church itself, all possible care must be taken, that we hold that faith which has been believed everywhere, always, by all [quod ubique, quod semper, quod ab omnibus].’ Although Fr Georges Florovsky has pointed out the ultimate insufficiency of the canon in his 1934 article ‘The Catholicity of the Church’ (see Bible, Church, Tradition: An Eastern Orthodox View, Vol. 1 in The Collected Works of Georges Florovsky [Vaduz: Büchervertriebsanstalt, 1987], pp. 51-4), nearly 30 years later he at least conceded, in ‘The Function of Tradition In the Ancient Church’ (1963), that the canon ‘was characteristic of the attitude of the Ancient Church in the matters of faith’ and that it ‘was at once the criterion and the norm’ (Bible, Church, Tradition, p. 73). On this subject, see also these comments from Orthodox Tradition.

There is a nice, short article on St Vincent in Orthodox America here, and a brief Life on the GOA website here. There is also the informative Catholic Encyclopedia article here, but of course one must keep in mind that it is heavily biased against St Vincent’s very Orthodox views on predestination, falsely calling them 'Semi-Pelagian'. Fr Seraphim notes that Lérins ‘was noted for its fidelity to Eastern doctrines in general, and to St Cassian’s teaching on grace on particular’ (The Place of Blessed Augustine in the Orthodox Church [Platina, CA: St Herman of Alaska Brotherhood, 1996], p. 45), and he cites Comm. 26, where St Vincent takes to task those who believe that grace can be had ‘without any labour, without any effort, without any industry, even though they neither ask, nor seek, nor knock’. See the helpful post on this subject by John Sanidopoulos here (speaking of whom, check out his post on vampires, featuring a fascinating video of interviews with Romanian peasants about their encounters with the undead).

Consequently, it is clear that the ‘fathers of Lérins’, gallic like Cassian, have themselves something fundamentally ‘eastern’ that allows them to be compared with their three colleagues. Who then are these sancti lirinensium patres? In all likelihood they are the authors of what is called the ‘Rule of the Four Fathers’, namely ‘Serapion, Macarius, Paphnutius, and the second Macarius’. These abbots with egyptian names give an eastern flavor to a text written in Latin. This short rule is probably the legislation which formed the basis of the monastery of Lérins, enacted around 400-410 by the founders of the community: Bishop Leontius of Fréjus, the aged monk Caprasius, and the first superior, Honoratus.

This testimony of the anonymous jura author is in fact one of the major pieces of evidence that allows us to identiy with great certainty the primitive rule of that celebrated cenobitic institution. The same text, in addition to the conspicuous service it renders historiography, offers a remarkable feature: the ‘fathers of Lérins’ are connected there in a special way to Saint Pachomius. This link established between the lerinsian Rule and the pachomian Rule is in turn one part of the evidence that hints at situating in the Jura another document of latin cenobitism that in parallel fashion combines extracts from Pachomius and lerinsian texts: the ‘Eastern Rule’ (Regula Orientalis). (pp. 13-4)

In conclusion, here is a Troparion for St Vincent in Tone 4 (from the GOA site):

With wisdom hast thou made plain to all the Orthodox Faith as that which alone hath been believed and honoured by all men, always and everywhere, also showing heresy to be innovation, groundless and unstable as a gust in a tempest. O Vincent, thine invincible prayers shelter the Church of God.

Thank you Aaron; as someone who only knew of the ‘Vincentian Canon’, thank you for the information on the life and beliefs of St Vincent.

A blessed Feast Day, through the prayers of St Vincent: and my prayers and warmest wishes for a blessed Pentecost.