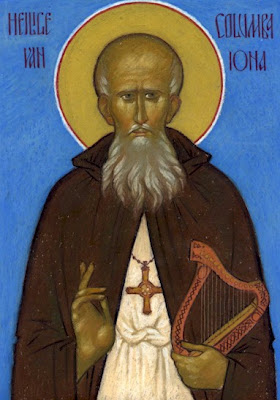 Judging from the comment I received from Bishop Savas, I suppose I should have made this clearer in the last post, but as I’ve noted in my response to him, the poems in Old Irish of Beccán mac Luigdech are believed to be 7th century. Like His Grace, in translation the language seems very ‘modern’ to me, and that’s one of the things I find so striking about these poems. I’m ‘reminded’, for example, of Hopkins, though it is far more likely that Hopkins knew Beccán than vice versa.

Concerning the latter as a man, Clancy and Márkus are fairly certain he was an anchorite within the Columban familia (Thomas Owen Clancy and Gilbert Márkus, Iona: The Earliest Poetry of a Celtic Monastery [Edinburgh: Edinburgh U, 1995], p. 133); concerning Beccán as a poet, Clancy and Márkus have commented:

He also displays the marks of a professionally trained poet, both in the complexity of the metres he employs and in his deft handling of them. The language he uses is simpler and clearer, on the whole, than that of the Amra, and in general free from the erudite and obscure use of Latin words which is a hallmark of that work. On the other hand, he shows an acquaintance with the vocabulary of native poetic art: he speaks of aí, ‘poetic inspiration, metrical composition’ (F 3?, T 12); and of imbas, ‘poetic knowledge’ (T 21). While appearing to be a poet trained professionally in his craft, he is also clearly a religious man, and the hero he idolises is a Christian hero, both in the life he has chosen and in his rejection of secular society. (p. 131)

So the time has come to post in full the second poem, Tiugraind Beccáin, ‘The Last Verses of Beccán’, also known as To-fed andes after the first two words. Concerning this poem, Clancy and Márkus write:

The metre he employs is a very demanding one. The stanzas comprise a couplet with disyllabic end-rime, each line of the couplet having twelve syllables, usually divided into three groups of four syllables, separated by a caesura [unfortunately, I don’t know how to reproduce the caesuras on Blogger]. Alliteration binds the whole poem together: generally across the caesura, between the end of one line and beginning of the next, and between the ends and beginnings of verses. There is also a simple closure to the poem, with alliteration between the last word of the poem and the first (tengae: To-fed). . . . This metre, which creates an effect similar to a litany in places, with its discrete, four-syllable statements (e.g. v. 14), is varied with the introduction of parallel statements, and other rhetorical devices. The whole is a remarkable crafted synthesis of sound, imagery and meaning. (p. 144)

He brings northward to meet the Lord a bright crowd of chancels—
Colum Cille, kirks for hundreds, widespread candle.

Wonderful news: a realm with God after the race,
a grand kingdom, since He’s set out my life’s progress.

Connacht’s candle, Britain’s candle, splendid ruler;
in scores of curraghs with an army of wretches he crossed the long-haired sea.

On the loud sea he cried to the King who rules thousands,
who rules the plain above cleared fields, kings and countries.

In the Trinity’s care he sought a ship—good his leaving—
on high with God, who always watched him, morning, evening.

Shepherd of monks, judge of clerics, finer than things,
than kingly gate, than sounds of plagues, than battalions.

The skies’ kind one, he tends the clouds of harsh heaven;
my soul’s shelter, my muse’s fort, Conal’s descendant.

Beloved of God, he lived against a stringent rock,
a rough struggle, the place on could find Colum’s bed.

He possessed books, renounced fully claims of kinship:
for love of learning he gave up wars, gave up strongholds.

Colum Cille, Colum who was, Colum who will be,
constant Colum, not he the protection to be lamented.

Colum, we sing, until death’s tryst, after, before,
by poetry’s rules, which gives welcome to him we serve.

I pray a great prayer to Eithne’s son—better than treasure—
my soul to his right hand, to heaven, before the world’s people.

He worked for God, kingly prayer, within church ramparts,
with angels’ will, Conal’s household’s child, in vestments.

Thank you, Aaron. This isn't an easy poem. I'm going to give it a closer read when time permits. It looks, though, that effort will be rewarded.

Yes, I think it will!

I really like this rugged metre and compressed sentiments. I have no way of assessing the translator's skill, other than to say s/he seems to have brought over a strong sense of the original's flavor. I wonder what Seamus Heaney could do with it.

Seamus Heaney--now there's a thought! I just love his Beowulf translation! Have you heard the recording of him reading it?

No, but will correct that ASAP.

I have been researching Beccan of Rum. I carried out a research project in the isle of Rum in 1975 carrying out a photographic record of possible Land Use in the island and a written report with photographs for Nature Conservancy Council. Many of the photographs are in the collections of the Royal Commission for Historical and Ancient Monuments, Edinburgh. Some references to my work occur in a project called the `Papar project`.
I am interested in writing a collection of prose|poems around the limagined life of Beccan in Rum. Using other research as points of refrence and also attempting to give colour and creative life to the place Papadil which is a special place in my memory.
You can view my story Papadil on my website www.croft7.com, that story is just one element in my thoughts on Papadil the place.
I am wondering if I could include Aarons translation of Beccan in my next book of Papadil, which will include facts as known and my interpretation of the life of Beccan, my initial thoughts are self publication, but it may be possible to interest a Publisher. The book would include my story Papadil,gathered historical refrences to Papadil and Beccan, and the prose\poems around the imagined Life of Beccan in Rum.

I'm so sorry I'm only now seeing this, ForestGardener. I'm afraid I don't check the blog comments very often anymore since I rarely post! Anyway, I hope that you eventually discovered that the translation included here was not mine, but that of Clancy and Markus in their anthology of poetry from Iona--which I highly recommend!