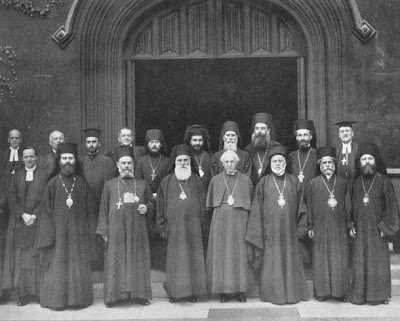 Earlier last week, I was forwarded an e-mail originally from the dean of the ROCOR cathedral in Chiswick, London (home of the Fuller’s brewery!), which made mention of the 140th anniversary of the conversion of a ‘Doctor Overbeck’, a parishioner of the cathedral who died in 1905. Now, even though a Western Rite liturgy is celebrated at my parish each Saturday, I’ve never been one of those ‘WR people’ who enthusiastically read up on every aspect of WR history to the point of geekhood. I had no idea who ‘Doctor Overbeck’ was.

Well, I was pleased to discover that no less a scholar than Fr Georges Florovsky had written about this Overbeck a little bit. In his essay, ‘Russian Orthodox Ecumenism in the 19th Century’, in Ecumenism II: An Historical Approach, Vol. 14 in The Collected Works of Georges Florovsky (Vaduz: Büchervertriebsanstalt, 1989), pp. 110-63, Fr Florovsky discusses the growing dissatisfaction among Roman clergy ‘immediately preceding the Vatican Council of 1870. Then he writes:

Another name must be mentioned in this connection. That is, Dr Joseph J. Overbeck who published in the sixties a number of booklets and pamphlets, in German, Latin and English, advocating not only a ‘return’ to Orthodoxy, but also a re-establishment of the Orthodox Church in the West. Overbeck (1821-1905) was originally a Roman Catholic priest and for a time Private Docent on the Theological Faculty at Bonn. During that period he had some connections with Dollinger. He left the Church and migrated to England, where he stayed the rest of his life. In 1865, he joined the Russian community in London as a layman. But he had a larger plan in mind. He anticipated the secession of a considerable number of clergy and laymen from the Roman authority in the near future, and was eagerly concerned with the problem of restoring ‘Orthodox Catholicism’ in the West. He regarded reunion with the East as the only practical solution, yet wanted to preserve the Western rite and all those Western habits and traditions which might be compatible with the faith and canons of the Orthodox East. In fact, it was an ambitious project of ‘Orthodoxy of the Western Rite’, somewhat parallel to the ‘Catholicism of the Eastern Rite’.

A formal appeal was presented to the Russian Synod (and probably to the Ecumenical Patriarchate) in 1869; and in 1870 and 1871 Overbeck visited Russia. A provisional draft of the proposed rite was prepared by Overbeck, based mainly on the Roman Missal, with certain insertions from the Mozarabic rite. Fr Eugene Popov heartily commended the project to the Russian Synod. In principle, the Holy Synod was prepared to approve the plan, but a final decision was postponed in connection with the further development of the Old Catholic movement. The Synod was anxious to ascertain whether there were a sufficient number of people in the West to join the project in question. The scheme was forwarded to the Ecumenical Patriarch in the same year (or in 1872), but it was only in 1881 (and after Overbeck’s personal visit to the Phanar) that action was taken. A committee was appointed to examine the project. It reported favorably in 1882 and the Patriarch gave his provisional approval, provided that the other Churches would concur. It seems that a protest was made by the Synod of the Church of Greece. The whole project came to nothing and was formally abandoned by the Russian Synod in 1884, upon the advice of the new Russian chaplain in London, Fr Eugene Smirnov. There was an obvious utopian element in the scheme, and it failed to attract any appreciable number of adherents. And yet it was not just a fantastic dream. The question raised by Overbeck was pertinent, even if his own answer to it was confusedly conceived. And the vision of Overbeck was probably greater than his personal interpretation. It was a vision of an Urkatholizismus, restored in the West with the help of, and in communion with, the Catholic Orthodox Church of the East, which had never been involved in the variations of the West. Overbeck differed from the main Old Catholic movement chiefly in his emphatic stress on the need for a restored communion with the East in order to make the return to a pre-Roman Catholicism real. It was unrealistic to disregard the fact of an age-long separation. This was the main contention of his brief Latin tract: Libellus Invitatorius ad Clerum Laicosque Romano-Catholicos qui antiquam Occidentis Ecclesiam ad pristinam puritatem et gloriam restauratem videre cupiunt (Halle, 1871). (pp. 133-4)

I found Fr Florovsky’s comments about this Overbeck appealing, and this sense was strengthened further by reading a little bit of his Catholic Orthodoxy and Anglo-Catholicism (1866), a heartfelt appeal—available online here—to the adherents of the Anglo-Catholic movement to seek communion with the East. Although Overbeck makes a few odd statements here and there, his earnestness is quite evident. Here are his opening words:

THERE is a kind of constraining power and agency inherent in Truth; "for we cannot but speak the things which we have seen and heard" (Acts iv. 20). Some may deem it wise not to startle the minds of settled persons by what they term a revolution in Religion. Some may deem it preposterous to oppose the rocky wall of the Church to the wild waves of a certain school of human science and researches. Some may deem it harsh and cruel to hurt the; feelings of friends, whose most sacred convictions we attack unreservedly. Oh! it is painful, I know, to disagree with those who are dear to our heart. But Truth is uppermost, and permits no bartering, no deference to circumstances whatever.

I found the Orthodox Church to be the only true Catholic Church, and, consequently, try to bring about a Reunion of the other Christian Churches (chiefly of the English Church) with the Orthodox.

One can also find Overbeck’s A Plain View of the Claims of the Orthodox Catholic Church as Opposed to All Other Christian Denominations (1881) on Google Books here. For more information on Overbeck, see Fr David Abramtsov’s 1961 Master’s thesis for the University of Pittsburgh, ‘The Western Rite and the Eastern Church: Dr J.J. Overbeck and His Scheme for the Re-establishment of the Orthodox Church in the West’, conveniently available in a pdf here.
Posted by Aaron Taylor at 2:51 PM

I would like to learn more of Overbeck's relationship to Döllinger, and thus to Catholic modernism. There are aspects of early Catholic modernist thought that might be considered amenable to strands of Orthodox thought, say from the Bollandists to Baron von Hügel, but in the current context of wished for ecumenical dreamings, I fear that certain sectors of the RCC would love to see Orthodox bring about some fulfillment of Catholic modernist longings which would include elements foreign to our faith.

But all that said, from what you write here I see no indication that Overbeck was after the same sort of project as the Catholic modernists. Döllinger himself was a complicated man. One of the things I like about both Döllinger and von Hügel is that one sees in them a depth and nuance not to be found in their later intellectual heirs.

Sorry Owen, you have gone well beyond my knowledge of any of these matters. I didn't even read the whole Florovsky article, just the part on Overbeck and a little bit on Pusey. Have you read it? I believe it says more about Döllinger, but I'll look tomorrow. Fr Abramtsov's thesis might have something on those connections too.

"I found the Orthodox Church to be the only true Catholic Church, and, consequently, try to bring about a Reunion of the other Christian Churches (chiefly of the English Church) with the Orthodox."

This statement confuses me. What kind of reunion is he seeking? Where the other Churches come together to acknowledge the only-ness of Orthodoxy?

So that would be a yes. Pardon my cynicism, but I've given up on that little dream. What does it mean for the Anglicans to invite Metropolitan Jonah on one day and Rick Warren on the next? They just want everyone to get along unchanged, validating each other and maybe picking up new fun ways to worship to add to their repertoire. Hopefully they'll surprise me.

Oh, that's going on this week. And I haven't read up on the St. Vladimir conference either.

Oh, I perfectly agree! Even Fr Florovsky called it 'utopian'.