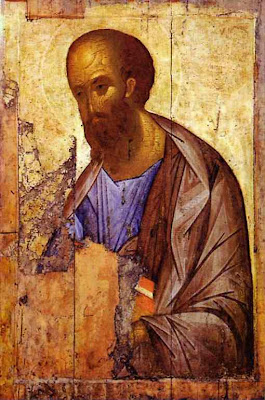 Some of the fruits of my library research today:

In his apparently magisterial book, The Moral Vision of the New Testament: A Contemporary Introduction to New Testament Ethics (SF: HarperOne, 1996), which my heart now greatly desires, respected New Testament scholar Richard B. Hays discusses the interpretation of the Christological hymn in Philippians 2:6-11. First, Hays outlines briefly the idea that in this passage, St Paul ‘takes a hymn whose original purpose was doxological and employs it in the service of moral exhortation. Christ becomes an “exemplar” who illuminates the way of obedience’ (p. 29).

Hays then points out the influence in the late 20th c. of a study of the passage by Ernst Käsemann which argues that verse 5 (Hays writes—mistakenly it seems—‘verse 6’), ‘Let this mind be in you, which was also in Christ Jesus’, ‘points not to Jesus’ action as an example but to the sphere of being “in Christ” that defines the context for the Church’s action’ (Hays, p. 30; Hays suggests that Ralph Martin offers a similar interpretation). Oddly, according to Hays, ‘Käsemann emphasized the impossibility of imitating the cosmic action of a divine being’s descent from heaven and ultimate exaltation above all creation; in his view, only a naïve and sentimental “ethical idealism” could see a moral example here’ (p. 29). In response, Hays observes that Käsemann’s interpretation doesn’t take into account the whole context of the hymn, and that it assumes a too rigid ‘correspondence between example and imitator’ (p. 30).

Our Lord Jesus Christ, when urging his disciples to undertake great works, makes himself an example. [ed. note—Here Chrysostom cites Matthew 5:12.] . . . This too the blessed Paul does, bringing Christ before there eyes when he urges them to practice humility. . . . For nothing so sustains the great and philosophic soul in the performance of good works as learning that through this one is becoming like God.

But I think the most poignant and powerful rejoinder to Käsemann could be something I found (with a little help from Fr Meyendorff’s introduction) shortly after reading Hays when I happened to be looking through Kathleen McVey’s translations of St Ephraim the Syrian (St Ephraim the Syrian, Hymns, trans. Kathleen McVey [NY: Paulist, 1989). In St Ephraim’s Hymn 25 on Virginity (stanza 4) (McVey, p. 371), we read:

The youth who loved our Lord very much,
who portrayed [and] put Him on and resembled Him,
was zealous in all these matters to resemble Him:
in his speech, his aspect and his ways.
The creature put on his Creator,
and he resembled Him although indeed he did not resemble what He was.
It is amazing how much the clay is able to be imprinted with the beauty of its sculptor.