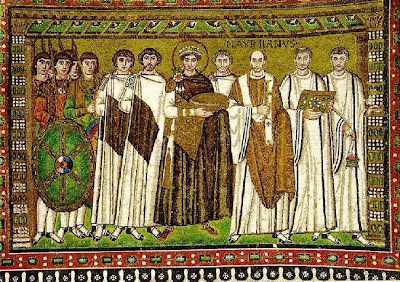 Although his novels are well known and, despite having their critics, often liked, to my knowledge Charles Williams’s Arthurian poetry is out of print and, I’d venture to guess, seldom read. I think this is rather a shame. Admittedly, I know little of poetry since the nineteenth century, and am scarcely in much of a position to comment on Williams’s work from a literary perspective. But I find much here that fascinates me. Here, for instance are the opening lines of the third poem in ‘Taliessin Through Logres’, ‘The Vision of the Empire’ (in Taliessin Through Logres, The Region of the Summer Stars, and Arthurian Torso, by Charles Williams and C.S. Lewis [Grand Rapids, MI: Eerdmans, 1980], p. 24):

The Acts issue from the Throne.
Under it, translating the Greek minuscula
to minds of the tribes, the identities of creation
phenomenally abating to kinds and kindreds,
the household inscribes the Acts of the Emperor;
the logothetes run down the porphyry stair
bearing the missives through the area of empire.

Taliessin walked through the hither angels,
from the exposition of grace to the place of images.
The morn brightened on the Golden Horn;
he heard behind him the chariots’ clatter
that bore a new matter to all the dialects;
he saw the nuntii loosened on the currents
over the sea, in the mechanism of motion,
rowers’ arms jointed to the imperial oars.
Chariots and galleys sprang from the shores;
the messengers were borne over sea and land.
The king’s poet gazed in the mirror of the Horn.

Concerning the idea of ‘Byzantium’ in the poem, C.S. Lewis has fortunately said some very enlightening things, which help not only to explain Williams but to understand better the very idea of ‘Empire’. Thus, in his ‘Williams and the Arthuriad’ (published with Williams’s Arthurian poem and ‘The Figure of Arthur’), we read:

The image of the Empire is the final form of something that had always haunted Williams and which he often referred to simply as ‘the city’. The word is significant. Williams was a Londoner of the Londoners; Johnson or Chesterton never exulted more than he in their citizenship. On many of us the prevailing impression made by the London streets is one of chaos; but Williams, looking on the same spectacle, saw chiefly an image—an imperfect, pathetic, heroic, and majestic image—of Order. . . . [Here, Lewis quotes from two of Williams’s novels as an illustration of the point.]

Such is Byzantium—Order, envisaged not as restraint nor even as a convenience but as a beauty and splendour. Perhaps no element in Williams’s imagination separates him so widely as this from other writers. The modern world has planners and orderers in plenty, but they are not often poets; it has poets not a few, but they seldom see beauty in policemen [alluding to a passage in The Greater Trumps].

Yet order, in the sense of discipline and civility, is not the whole of what Williams sees in Byzantium: if it were, the Roman empire might have been as apt an image as the Byzantine. He chooses the Byzantine because, whether rightly or wrongly, [here Lewis notes, ‘Fr Gervase Matthew, OSB [I believe he means OP], tells me that Williams’s picture of Byzantium catches some aspects of the historical reality better than Gibbon’s: though Gibbon was at first Williams’s only source] we think of it as something more rigid, more stylized, more scrupulously hierarchical, more stiffly patterned than the Roman. Its organization suggests something geometrical; and that was what Williams desired. His great saying ‘Hell is inaccurate’ implies his outlook on heaven. Deeply moved by even human order, he was also deeply aware of Divine Order as something of a flawless and mathematic precision imposing itself on the formless flux of natural moods and passions, imposing itself in the shape of virtue, courtesy, intelligence, ritual. . . . Thus he complained that the word glory in English tended to mean a ‘mazy bright blur’ whereas ‘the maze should be exact and the brightness should be that of a geometrical pattern’ (He Came Down from Heaven, p. 39). (pp. 288-90)

I have found that Lewis’s description of Williams’s notion of ‘Byzantium’ and ‘the city’ has had a tremendous influence on my thinking. The references to courtesy and ritual in the penultimate line remind me of Lewis’s Preface to Paradise Lost, a book that has had a similar kind of influence on me. The references to geometry seem to illuminate something of what Ignatius Reilly may have meant when he said he wanted ‘a good, strong monarchy with a tasteful and decent king who has some knowledge of theology and geometry and to cultivate a Rich Inner Life’ (John Kennedy Toole, A Confederacy of Dunces [NY: Grove, 1980], p. 213). And I even find myself occasionally seeing beauty in policemen!

At any rate, Lewis finally uses it for a bit of exegesis on the poetry above:

The throne-room of the Emperor of Byzantium from which we see Taliessin returning here typifies the presence of God: an audience with the Emperor, the vision of God. It is the central unity: all creation is simply an expression of the infinitely varied forms of that one basic reality—‘The streets repeat the sound of the Throne’. . . . His ‘household’ and ‘logothetes’ ‘abate the identities of creation’ for the benefit of ‘kinds and kindreds’; turn the noumenal unity into a multitude of phenomena. When Taliessin returns from the throne-room down the porphyry stairs he is coming back to the ‘place of images’, as it were, to the created universe which is an image of the uncreated. If you prefer it, he is turning from the vision of God enjoyed in a moment of devotion to that indirect vision of God which a good man and a good poet enjoys in such ‘images’ as poetry, earthly order, and romantic love. All round him he hears the ‘clatter’ of the chariots which are leaving Byzantium in every direction to bear the Divine messages through the world. But because he is still fresh from the Centre he can see the whole Empire in its true or inner significance. (p. 291)

Aaron, I happened upon this old post quite by accident this morning (looking for a quote from 'Taliessin Through Logres', and being too lazy to type it out from my copy) and I must say, I was intrigued and delighted. Williams' ideal of Byzantium (which, in fact, never existed) had a profound impact on me in my pagan days. Heretic extraordinaire that he may be in some respects, this fascination with things Byzantine that my casual contact with his Arthurian poetry produced (another happy chance, as we call such things in Middle-Earth) no doubt had a great deal to do with my nascent religious and political thoughts. In other words, I knew there was some reason I enjoyed your posts. :)

I have, however, gone from Williamsianism to Orthodoxy (by another happy accident, perhaps, and by the intercessions of my heavenly patron, pictured at the beginning of your post), and no longer elevate Williams above his station; in fact, I've begun to see him (and to a lesser extent, CSL, who became his creature in some ways) as a somewhat tragic figure, struggling against the inherent inadequacies of the West, perhaps even dimly aware of the cure, but ultimately unable to receive it. His chapter on the "person of the Sacred Emperor" in The Descent of the Dove makes it pretty clear that he has no idea what real Orthodox ecclesiology is like, and merely mythologized and mysticalized the worst examples of caeseropapism (and, like all westerners, assumed that was the norm in the East--after all, someone has to be Pope, right?). Still, there is a kind of wisdom, even if it is a shaky bridge to the East, in Charles Williams--if you don't get distracted by the irrelevancies and trappings of mystical occultism along the way. And this post certainly identifies and explains that.

We really must get a chance to discuss CW's Arthurian poetry sometime.

Justinian> It's nice to finally get a comment on this post! I certainly hope I didn't appear to be elevating Williams 'above his station', as it is precisely as 'tragic figures' that I view many such men. I take from him what I can, I am sympathetic to him, but I am perfectly cognisant of his errors.

I do hope more CW fans will chance across these posts though. I sometimes begin to fear my readers are uninterested in anything but posts on Saints!

I definitely wasn't accusing you of undue CW elevation! He was a brilliant man, and his thought is very attractive when you've been wandering the desert for a very long time. I think his works are worth more attention than they are accorded anywhere, and I'm always happy to see another fan talking seriously about him.

You might try looking at Eighth Day Books for copies of the Talesin poems; at least they had some on the Eighth Day table when I was in Wichita for a writer's conference back in '98. I don't remember who the publisher was.