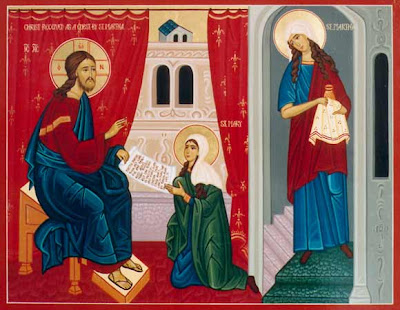 Today, 4 June on the Church’s calendar, we celebrate the memory of Ss Mary and Martha of Bethany, sisters of St Lazarus. The Greek Synaxaristes (here) calls these two sisters with their brother ‘the most beloved and holy family of Bethany’, and they are mentioned a number of times in the Gospels of St Luke and St John. The most illustrative story of course, which forms the Gospel reading for several of the feasts of the Mother of God, is that told in Luke 10:38-42:

Now it came to pass, as they went, that He entered into a certain village: and a certain woman named Martha received Him into her house. And she had a sister called Mary, who also sat at Jesus’ feet and listened to His word. But Martha was cumbered about much serving, and came to Him and said, Lord, dost Thou note care that my sister hath left me to serve alone? Bid her therefore that she help me. And Jesus answered and said unto her, Martha, Martha, thou art careful and troubled about many things: but one thing is needful: and Mary hath chosen that good part, which shall not be taken away from her.

There is a wonderfully soul-profiting interpretation of this Gospel in the commentary on St Luke of the Blessed Theophylact of Ohrid (The Explanation by Blessed Theophylact, Archbishop of Ochrid and Bulgaria of the Holy Gospel According to St Luke, Vol. III of Bl. Theophylact’s Explanation of the New Testament, trans. Fr Christopher Stade [House Springs, MO: Chrysostom, 1997], pp. 121-2):

Hospitality, which Martha displays, is a great virtue which ought not to be scorned; but it is even greater to give heed to spiritual words. . . . See the Lord’s way of thought: He did not say anything to Martha until she had first given Him a reason to rebuke her. Only when she tried to draw her sister away from listening, did the Lord use the occasion to rebuke her. To practice hospitality is honorable, until that point is reached when it causes turmoil and draws us away from the things that are more important. When hospitality begins to hinder us from doing the things that are more important, then listening to divine words is preferable. . . . Understand that Martha represents active virtue, while Mary represents divine vision. Action entails distractions and disturbances, but divine vision, having become the ruler of the passions (for Maria means mistress, she who rules), devotes itself entirely to the contemplation of the divine words and judgments. Give heed also to these words of the Gospel: Mary sat at Jesus’ feet and listened to His words. The feet are understood as symbols of active virtue, representing movement and step-by-step progression. And sitting is a symbol of steadfastness and constancy. Therefore, whoever sits at the feet of Jesus, that is, whoever steadfastly follows and imitates Jesus, is established in all active virtue. Then such a man will also come to the listening of the divine words, that is, he will attain to divine vision. Mary sat first, and by doing this she was then able to listen to Jesus’ words. Therefore, you also, O reader, if you have the strength, ascend to the rank of Mary: become the mistress of your passions, and attain to divine vision. But if you do not have the strength, be Martha, and devote yourself to active virtue, and by this means welcome Christ. . . . Activity has a part that will be taken away from it, namely, the cares and distractions that accompany it. For as a man progresses and attains to divine vision, he is freed from distractions and troubles, and so it can be said that something is taken away from him. But he who is engaged in divine vision shall never be deprived of that good part, the vision of God. What else is there to attain, once he has reached this pinnacle, that is, once he sees God, which means that he is deified? He who is found worthy to see God, becomes God. For something is comprehended only by that which is like unto it.

Matushka Maria Naumenko has written a helpful essay elabourating on this interpretation of the Gospel about Ss Mary and Martha. She concludes, ‘Not much detail is recorded about their lives after Christ’s ascension. We do know that they were instrumental in the apostolic work in preaching the Gospel of Christ, of their brother St Lazarus . . . The circumstance of their death has not reached us’ (‘Balancing Martha and Mary In Our Lives’, Orthodox Life 57.4, July—August 2006, p. 27; incidentally, in the same issue, on pp. 6-15, is a great article on The DaVinci Code by Ryassophore-monk Serge [Nedelsky], now Hierodeacon Samuel, which can be read online here).

But it is interesting to note that some further details have indeed been preserved in the West. In her lecture, ‘The Transmission of Mystical Orthodoxy To the West’ (A Cloud of Witnesses: Woman’s Struggle for Sanctity, Talks from an Orthodox Women’s Conference [Chico, CA: Valaam Society of America, 1992], pp. 19-47), Catherine McCaffery points out, ‘An ancient Vatican manuscript records that in that year 35/36 AD,—

Lazarus, Mary, Martha, her handmaiden Marcella, Maximin a disciple, and Joseph the decurion of Arimathea, against all of whom the Jewish people had special reasons of enmity, were exposed to the sea in a vessel without sails or oars. The vessel drifted finally to Marseilles, and they were saved. . . .’ (p. 39)

Later in the same article, McCaffery adds that ancient Gallic traditions (for some of which, see the late Latin Life of St Martha in Jacobus de Voraigne’s Golden Legend) claim that—

Lazarus’ sister Mary lived and died as an anchorite on a high mountain in southern France, and her sister Martha founded a convent of women and was buried with great honor at Tarascon. In these old stories about the end of their lives, we see played out the very pattern recorded in the Gospels about Mary and Martha when they were visited in their home in Bethany by the Lord—Mary, sitting quietly and adoringly at His feet, listening to His every word; and Martha her sister, bustling about in the kitchen, directing the serving women. In France, Martha continued to serve and direct women, establishing the first of so many convents for which France is famous. Mary, who in Bethany had chosen ‘the best part’, ends her life in monastic solitude on a high mountaintop in Gaul, calling out in her heart, like Magdalene in the garden, Rabboni—Master! (pp. 44-5)

Matushka Naumenko also mentions a specific follower of the example of St Mary and St Martha in the recent life of the Church—the New Martyr Elizabeth of Russia. Matushka writes:

There was a saint who lived at the beginning of the last century who uniquely combined the principles of active virtue and divine vision. This was New Martyr Grand Duchess Elizabeth, the sister of the Royal Martyr Empress Alexandra of Russia. . . . Following the tragic murder of her husband, she founded the Convent of Martha and Mary in Moscow wherein she took monastic vows and became the abbess. A convent such as this had never been founded in Russia. In it she combined the virtues of Martha—serving our Lord through serving mankind and Mary—serving our Lord through prayer and self-amendment. It combined medical and charitable work with contemplative life. On the premises were two churches, a hospital, an orphanage and a building to house the sisters. It was indeed a shining light in contrast to the darkness of the godless communistic regime. (p. 22)

St Nicholas (Velimirović) has written a beautiful 'Hymn of Praise' in the Prologue for today's feast entitled 'Hospitality':

Hospitality, a virtue which by God is commanded,
Until now, by it, many souls were drawn to Paradise.
Abraham the Wonderful showed infinite hospitality,
Immeasurable and cordial and not hypocritical.
And King David greatly respected hospitality,
That is why, the life of King Saul, he strictly guarded.
And when the Ancient One [Christ] appeared, older than the aged Abraham,
From the Lineage of David, when darkness hid,
Then, Martha and Mary, sisters of Lazarus,
Showed hospitality these hospitable virgins:
Hosted the Greatest One since the sun flows,
With Hospitality, each one of them heavenly paradise attained.
With hospitality, perfect in heart and food,
Hospitality most worthy in word and in deed.
And the Lord Most-rich, abundantly repaid,
And, this hospitable home, when death saddened
Jesus, the deceased brother to the sisters, resurrected,
And, to them, eternal glory spread throughout the entire world.
This is the reward of hospitality from God Himself,
The Lord loves the Hospitality of a sincere heart.
Holy Church boasts of Martha and Mary,
Teaching that we are also guests at the table of the Lord.

In conclusion, here is the Apolytikion in Tone 3 of the Saints:

Since ye believed in Christ with strong and ardent faith,
and ever worshipped His divine and mighty deeds,
ye both adorned yourselves with all the splendour of sacred virtues.
With your holy brother now,
ye are also vouchsafed to dwell with the ranks of Saints on high,
O ye sisters of Lazarus;
and with him, O wise Mary and Martha,
ye pray for us all unto the Master.