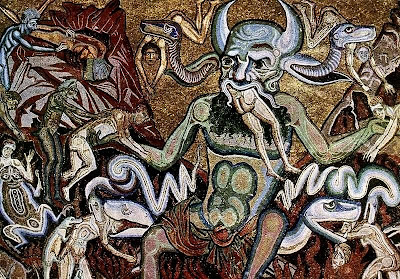 To continue my ongoing project of posting excerpts from the interesting books I’ve managed to acquire, today I will be giving Logismoi readers a little taste of The Vintage Book of the Devil, ed. Francis Spufford (NY: Vintage, 1997). The book is essentially, in the editor’s words, ‘a literary anthology’ (p. 15)—‘It only tries to put together some of the ways the devil has been written about, from the sensational to the dead-serious, with a very wide ground in between occupied by all those writers who simply rummaged the devil out of the box of imagining, and gave him lines to say’ (p. 15). Aside from the wonderful excerpts, there is a fascinating introduction by the subject himself. Obviously, it expresses some of the, typically cynical, views of the editor on the nature and history of the Devil, but these are easier to take coming from the Devil himself rather than some British journalist. As our diabolical protagonist acknowledges, ‘But who listens to me? My vested interests are obvious’ (p. 7). Of much more interest to me is the fact that there really are some valid insights here, although they are of course expressed with the Devil’s condescending misanthropy. Well, here’s a sample:

Oh, and I must mention my little Yezidis, toujours fidèles—a Mesopotamian sect much harassed by their neighbours. They worship me under the emblem of the Peacock, the first of all the beasts of the earth for pride, considering that the wise creator resigned the earth to me, and that I will remember my friends when I am reinstated in heaven. Thank you, Yezidis: I am touched. Your hopes are misplaced, and your numbers do not inspire much confidence, but I dare say a sulphurous tear might trickle down my hollow cheek if I were given to emotional display. (p. 6)

Furthermore, speaking of the idea that he is the ‘opposite’ of God, or ‘the essence of evil’, or that evil is ‘a thing in itself’, he writes:

. . . Your more impressive religious thinkers ruled it out altogether. It was your constant fear, but it never described the things you actually let me do. A modicum of success as a tempter was all I was allowed: you will note, please, that even then I could do nothing without your consent.

The fact that the dream has lingered on so long, you may attribute to the well-worn grooves your speculations run in, not to the creeds most of you have abandoned. More precisely, in the present century, you have to thank the way your philosophy and psychoanalysis abstract the pros and cons of good and evil when the deal with them. Religious good and evil, lifted out of the stories and theologies that set them in exact relation to one another, took on a mythic weightlessness, and were manipulated thus so dextrously that you might be forgiven for concluding they are indeed opposing faces of a single metaphor. (Forgiven, but not by me. I leave forgiving to those who do it well. It is not my métier.) (p. 4, 5)

And now, here are three of the texts selected by Spufford, with the headings he has given. The first is from Origen (Spufford, pp. 74-5):

Origen Shows Celsus how the Christians Piece it all Together

Some such doctrine is hinted at in the story that the serpent, which was the origin of Pherecydes’ Ophioneus, was the cause of man’s expulsion from the divine paradise, and deceived the female race with a promise of divine power and of attaining to greater things; and we are told that the man followed her also. And who else could be the destroyer in Exodus, which Moses wrote, except the one who is the cause of destruction to those who obey him and who do not resist and struggle against his wickedness? Further, the averter in Leviticus, which the Hebrew text called Azazel, is none other than he. The goat upon whom the lot fell had to be sent forth in the desert so that it should avert evil. For all who, on account of their sin, belong to the portion of the evil power and who are opposed to the people of God’s inheritance, are deserted by God. Moreover, take the sons of Belial in Judges. Who other than he can be the one whose sons they are said to be because of their wickedness? A clearer instance than any of these is that in the book of Job, who was even earlier than Moses himself. It is there written that the devil stands snear God, and asks for power against Job that he may encompass him with very severe calamities, first by the destruction of all his possessions and his children, and secondly by afflicting Job’s whole body with a violent attack of the disease called elephantiasis. I omit the passages from the gospels about the devil tempting the Saviour, that I may not appear to reply to Celsus with arguments on the question which are drawn from more recent scriptures. Moreover, in the last chapters of Job, where the Lord spoke to Job through a whirlwind and clouds the sayings recorded in the book bearing his name, several passages could be taken which deal with the serpent. I have not yet mentioned also the examples from Ezekiel where he speaks, as it were, of Pharaoh, or of Nebuchadnezzar, or of the prince of Tyre, or the passage from Isaiah where the dirge is sung for the king of Babylon. From these scriptures one would learnt not a little about evil, of the character of its origin and beginning, and how that evil came to exist because of some who lost their wings and followed the example of the first being who lost his wings.

The second is a description of a Sabbat (Spufford, p. 24)

Some Swedes Meet an Antecessor in a High-Crowned Hat

We of the Province of Elfdale, do confess, that we used to go to a Gravel-Pit, which lays hard by a Cross-way, and there we put on a Vest over our heads, and then danced round, and after this ran to the Cross-way, and called the Devil thrice, first with a still Voice: the second time somewhat louder: and the third time very loud, with these words, Antecessor come and carry us to Blockula. Whereupon immediately he used to appear, but in different Habits: but for the most part, we saw him in a Gray-Coat, and red and blew Stockings. He had a red beard, a high crowned Hat, with Linnen of diverse colours, wrapt about it, and long Garters upon his Stockings. It is very remarkable, that the Devil never appears to the Witches, with a Sword at his side.

‘Faust Requires Mephistopheles to Describe Hell and Heaven for Him’

‘Tell me, I command you,
What is that place called hell?’

‘It was of hell I asked to hear,
Not your stale jokes.’

‘But hell is of no substance,
A confused and hence confusing thing—’

‘It is yourself that you describe,
I think.’

‘So be it—hell is,
Well, it’s empty.
Oh there are crowds of people all around.
But hell, you feel, is—empty.
The word is emptiness.’

‘Now let us speak of heaven.
What manner of place is that?’

‘I lack authority to speak of such.’
(Though not to miss it.)

‘Yet you were once in heaven,
Or so I’ve heard.’

‘Some time ago, it may have changed . . .
But—heaven is full.
That’s not to say it’s chock-a-block with people.
Simply, full—that’s what you feel.
The word is fullness.’

‘For one renowned for eloquence
I find you sadly tongue-tied!’

‘Whereof one cannot bear to speak,
Thereof one says but little.’

I thought it interesting how those last two lines seem to modify Wittgenstein—‘heaven is full’, on the other hand, why, there’s Tom Waits, but with a different meaning!
Posted by Aaron Taylor at 12:50 PM

That's a great poem. Thanks for bringing it to your readers' attention.