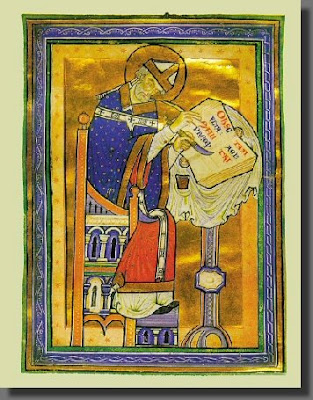 Today, 19 May on the Church's calendar, we celebrate the memory of St Dunstan (c. 909-988), Archbishop of Canterbury. Unfortunately, I don't have much time today to write a proper post for this great English Saint, but I wanted to do something at any rate. Here is the account of St Dunstan's life in the neat little book Glastonbury Gleanings, by F. Vere Hodge (Norwich, UK: The Canterbury Press, 1991), p. 14:

In the Church, helped by Ethelnoth, he succeeded in his aim to impose a strict standard of life, according to the Rule of St Benedict, on the Glastonbury monks initially but eventually in monasteries throughout southern England.

As a statesman, Dunstan managed to retain the confidence of three out of four of the young Kings, Edmund, Edred and Edgar, and so was able to guide them over some forty years.

And he was a skilled writer, illuminator, metal worker and musician; he designed and had built a number of magnificent organs; and he encouraged and raised the standard of English monastic art.

The psychic side of his nature was well-developed, and caused him to have a variety of 'seeings' throughout his life. Indeed, he seems to have been one of those who live half in this world and half in the next: a gift which does not make for an easy life.

On Ascension Day, Thursday 17th May 988, he preached three times in Canterbury Cathedral. This tired him, and he spent Friday in bed. On Saturday morning he received Holy Communion, and began to sing Psalm 111 (Psalm 110, LXX): 'I will give thanks unto the Lord with my whole heart . . .'. So he died, and was buried at Canterbury. His Feast Day is 19th May.

Christopher Dawson connects St Dunstan with the return of 'monasticism and the monastic culture . . . to England and Normandy . . . after more than a century of utter destruction; with the result that a century later the Norman and English monasteries were again among the leaders of Western culture' (Religion and the Rise of Western Culture: Gifford Lectures Delivered in the University of Edinburgh 1948-1949 [Garden City, NY: Image, 1958], p. 66). Ethelred Taunton writes that his 'name is writ large over the history of his times' (p. 11), for, among other achievements, 'Under the care of Dunstan and Ethelwold and Oswald, in a few years more than forty monasteries rose from their ruins, and God's praises were sung throughout the land once more by Benedictine lips. Piety and learning again flourished' (The English Black Monks of St Benedict: A Sketch of Their History form the Coming of St Augustine to the Present Day, Volume the First [London: John C. Nimmo, 1897], p. 14). According to John Henry Newman:

As a religious he shows himself in the simple character of a benedictine. He had a taste for the arts generally, especially music. He painted and embroidered; his skill in smith's work is recorded in the well-known legend of his combat with the evil one. And, as the monks of Hilarion joined gardening with psalmody, and Bernard and his cistercians joined field-work with meditation, so did St Dunstan use music and painting as directly expressive or suggestive of devotion. 'He excelled in writing, painting, moulding in wax, carving in wood and bone, and in work in gold, silver, iron, and brass,' says the author of his life in Surius, 'and he used his skill in musical instruments to charm away from himself and others their secular annoyances, and to raise them to the theme of heavenly harmony, both by his sweet words with which he accompanied his airs and by the concord of the airs themselves.' (qtd. in Taunton, p. 12-3)

The 'legend' that Newman refers to is the famous story of St Dunstan grabbing the Devil by the nose with a pair of goldsmith's tongs (see here). It seems there is a pageant depicting this legend and dating to 1687. The Saint makes a speech to the lord mayor as follows:

Waked with this musick from my silent urn,
Your patron DUNSTAN comes t' attend your turn.
AMPHION and old ORPHEUS playing by,
To keep our forge in tuneful harmony.
These pontifical ornaments I wear,
Are types of rule and order all the year:
In these white robes none can a fault descry,
Since all have liberty as well as I:
Nor need you fear the shipwreck of your cause,
Your loss of charter or the penal laws,
Indulgence granted by your bounteous prince,
Makes for that loss too great a recompence.
This charm the Lernæan Hydra will reclaim;
Your patron shall the tameless rabble tame.
Of the proud CHAM I scorn to be afear'd;
I'll take the angry SULTAN by the beard.
Nay, should the DEVIL intrude amongst your foes, [Enter Devil.

That will have to do for now. There is a service in English for St Dunstan by Reader Isaac Lamberson here (the title of the post is taken from the first stanza of Ode 1 of the Canon). If I have time later, I will post 'A Confession and Prayer for Forgiveness, by St Dunstan', included in Hodge's book.
Posted by Aaron Taylor at 2:49 PM