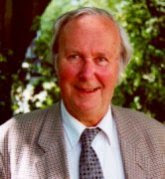 In yesterday's post on St Melangell of Wales I had occasion to quote from the English scholar, A.M. ‘Donald’ Allchin, thus reminding me that I’ve been meaning to post about him for some time. I did not until recently know much about Allchin at all, but he is one of those people whose name seems to have popped up in various contexts, and it was this, more than anything that he’s written specifically, that prompted this post. That is, I'm afraid I don't have much of substance to offer here, just an overview of my encounters with Allchin.

The first place I definitely recall hearing of him was in the festschrift for Bishop Kallistos (Ware), Abba: The Tradition of Orthodoxy in the West, ed. Fr John Behr, et al. (Crestwood, NY: St Vladimir’s Seminary, 2003). First, in Fr Andrew Louth’s brief biography of Bishop Kallistos, we read the following anecdote:

A story told by A.M. (‘Donald’) Allchin, who was several years senior to Timothy at Westminster [a public school attached to the Abbey] and was to become one of his longest-standing friends, relates how, when Donald was supervising prep. one evening, Timothy’s hand shot up and he requested that, having finished his prep., he might be given permission to read. ‘What are you reading?’ asked the prefect. ‘Kant’s Critique of Pure Reason,’ came the reply. (pp. 13-4)

Second, there is the fascinating article that Allchin contributed to this volume: ‘“The Heir of Resurrection”: Creation, Cross and Resurrection in Early Welsh Poetry’ (pp. 317-33), to which I have already referred here. As a reference to the occasion he mentions in this article his friendship with Bishop Kallistos, and how, despite the fact that he has not joined the latter in becoming Orthodox, he has still been immensely influenced by Orthodoxy since even before university (pp. 317-8). Finally, towards the end of a fascinating study, Allchin writes:

It will not have escaped the notice of the Orthodox reader that many of the poems we have quoted date from after 1054 and one or two from after 1204. But the vision of Christian faith which they express is, I would maintain, the vision of first-millennium Christianity, the vision of a Christian world in which communion between East and West has not been broken . . . (p. 332)

Since first reading this enlightening piece, the only other work of Allchin’s I’ve had the opportunity to read is his brief but stirring introduction to Daily Readings with St Isaac of Syria, ed. A.M. Allchin, trans. Sebastian Brock (Springfield, IL: Templegate, 1989). I thought one particularly well-written passage was the following:

But is it possible that his work will be able to speak across the chasms which divide East from West, the seventh from the twentieth century? It will be for the reader to decide.

For myself I can only say that there are words here which once heard are never forgotten, words which speak with the clarity and vigour which we find in the Gospels themselves: ‘Like a handful of dust thrown into the sea are the sins of all mankind compared with the mercy and providence of God’ (63). ‘Blessed is he who has eaten of the bread of love, which is Jesus’ (25). (pp. 11-2)

Finally, while I did not find a great deal about Allchin on the internet, I did come across this quite helpful bio and bibliography here:

Born in London in 1930. Educated in London and Oxford. Spent many years in Oxford as a mixture of Student Pastor and a University Lecturer. For fourteen years 1973–87 he was Canon in Canterbury Cathedral:

'…I was converted to the existence of Wales in the early summer of 1961 or 1962. Until then, like almost all English people, I knew nothing about the place and nothing about its history, language and culture…' (Canon Allchin, 2007)

Since then, his writing has continued to be centred on the nature of the Christian tradition including his major study of the great Danish preacher poet, polymath, politician and hymn writer N.F.S. Grundtvig (see Saunders Lewis’ play Excelsior). More and more, as the years have gone by, Welsh material has become central to Canon Allchin’s work and there he has written at least four or five books devoted to Welsh topics and a variety of reviews and articles.

In 1994 Canon Allchin came to live in Bangor and became an Honorary Professor in the Theology and Religious Studies Department of the University there. He has written guides to two holy places, Ynys Enlli and Pennant Melangell, and is currently enlarging and revising them. Canon Allchin has written various reviews and articles about several Welsh poets in English including R.S. Thomas and Ruth Bidgood. He is currently planning an introduction to the work of the fourteenth-century Ynys Mon poet Gruffudd ap Maredydd ap Dafydd.

Christian Tradition as a Whole:


Introduction to the Welsh tradition:

I've also been fascinated by him as his name seems to have cropped up for me in interesting places (including, as a not very important aside, in Merton's journals).

If I'm not confused, he was chaplain (or warden, or some similar designation) for many years to the Anglican Sisters of the Love of God (Fairacres, Oxford) and collaborated with them in projects and publications, including an ecumenical consulation on eremitical life in the early 1970s. I once read the papers from it and remember being particularly impressed with his one.

Hmm, these 'Sisters of the Love of God' are interesting too, aren't they? Benedicta Ward appears to be one of them, they published Chitty's translation of St Anthony's letters (among other things), and Fr Louth gave the lectures in Origins of the Christian Mystical Tradition at their convent.

These past two posts are further evidence of your being in God's favor.

It will not have escaped the notice of the Orthodox reader that many of the poems we have quoted date from after 1054 and one or two from after 1204. But the vision of Christian faith which they express is, I would maintain, the vision of first-millennium Christianity, the vision of a Christian world in which communion between East and West has not been broken . . This is very important for me, as one who, well, more or less venerates Llywelyn ap Gruffydd and his daughter princess Gwenllian.

I was wondering when you were going to get around to him!

I've known Fr Donald for better than 20 years. I was his assistant at the St Theosevia Center for the Study of Christian Spirituality in Oxford for a couple of years in the late '80's, and continued to work closely with him when I took over for a few years as Warden of the adjacent House of St Gregory and St Macrina. He is a good man, through and through, and a very generous and supportive scholar. It warmed my heart to see your tribute to him.

Owen> It's reassuring that at least you believe I am in God's favour! And I had hoped you would enjoy the references to Wales.

Despota> I suspected that you might know Allchin. Always glad to warm hearts!

Aaron, yes, my impression is that they're a very solid community. I once spent some time at a sort of skete that they have in Kent. Given that I was supposed to be being a hermit, I didn't interact with the sisters much, but the contacts that I did have were good, and they had a wonderful library. SLG Press publishes some very good things, and relatively inexpensively too, from what I remember.

To add to your information about Fr Donald: he is a man of varied interests, all of which he pursues with enormous energy. Among his passions (in the good sense): the theology of the Russians of Paris (a close friend of the Zernovs and Nicholas Lossky); contemporary Romanian Orthodoxy (he was a close friend and great promoter in Anglican circles of Fr Dumitru Staniloe, and was present for his funeral); the theology and poetry of Grundtvig (he learned Danish to read him in the original) and, of course, Welsh poetry. Other passions include St Isaac the Syrian, Hildegard of Bingen and Meister Eckhart

He was very close with a number of people of interest to us both, including Fr Derwas Chitty and Fr John Romanides. He has known my own Archbishop Demetrios and Archbishop Anastasios of Albania for longer than I've been alive. He was also a friend, as was noted, of Fr Louis (aka Thomas) Merton. Their correspondence is included in the first volume of Merton's letters. I remember being frozen in my tracks upon finding, when helping him sort through some files, a telegram from Western Union dated December 11, 1968, which read: "REGRET TO INFORM YOU OF THE ACCIDENTAL DEATH OF FR LOUIS IN BANGKOK STROP DETAILS TO FOLLOW STOP". Fr Donald was driving Fr Louis back to Gethsemane when they heard the news on the radio that MLK had been assassinated in Memphis.

Sr Benedicta, Andrew Louth, Sebastian Brock and Fr Ephrem Lash were frequent visitors to St Theosevia. Less frequent but no less noteworthy: Sir Stephen Runciman and Iris Murdoch. Others who lived at St Theosevia's during my many years at Oxford include the present Patriarch of Romania, Daniel, and Archbishop Hilarion of the Moscow Patriarchate, Fr John Behr and Prof Peter Bouteneff (the last two, my koumbaroi).

Wow! I'm always interested in these interconnections, and there certainly are a lot of them! I think we should start playing 'Six Degrees of Donald Allchin' instead of 'Six Degrees of Kevin Bacon'. I became well acquainted with Fr Ephrem Lash two years ago, so that's my only connection with any of those people!

Thank you for your informative post and comments on Donald Allchin. What a find! His work, Participation in God is well worth the effort to find and read. Transforming (pun intended) for once nursed on the legal milk of the Reformation.

Notdonne> You're quite welcome! And thank you for your recommendation of one of these titles in particular. I would hardly have known where to start.

Check out this great Orthodox blog from Cyprus. It is full of rare and unkown information:

Orthodox> Thank you. I've got it on my blogroll and reader already!

It may be of interest that Donald was one of the main founders, and has for many years been President, of the Thomas Merton Society of Great Britain and Ireland, giving a spirited Presidential address at the Society's main conference every two years, usually held at Oakham School (where Merton was a pupil). The next conference will be this year: 9 - 11 April. Details can be found at the Society's website: www.thomasmertonsociety.org
Larry Culliford
Chair, TMS of GB & I

Thank you, Mr Culliford. I'm a big fan of Merton's poetry. I also recall with a chuckle some of his comments about his time at Oakham School in Seven-Storey Mountain!

Thank you for posting this information, sir. May he rest in peace!