'As a Thunderer, Heresies He Destroys'—St Epiphanius of Salamis 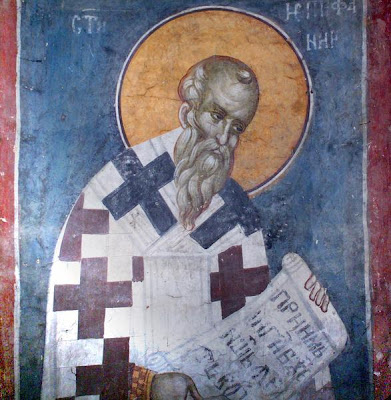 Today, 12 May on the Church’s calendar, we celebrate the memory of St Epiphanius (c. 315-403), Bishop of Salamis, Cyprus. According to Tradition, this holy hierarch was born into a Palestinian Jewish family, but was baptised after his parents’ death through the influence of an anchorite named Lucian (see Bulgakov). He was tonsured a monk by St Hilarion and lived for some time as his disciple. According to Benedicta Ward, St Epiphanius founded a monastery ‘at Besanduk near Eleutheropolis, between Jerusalem and Gaza’ (The Sayings of the Desert Fathers: The Alphabetical Collection, rev. ed., trans. Benedicta Ward [Kalamazoo, MI: Cistercian, 1984], p. 56). Fr Georges Florovsky points out that he spoke five languages—‘Greek, Hebrew, Syriac, Coptic, and some Latin’ (The Eastern Fathers of the Fourth Century, trans. Catherine Edmunds, Vol. 7 of The Collected Works [Vaduz: Büchervertriebsanstalt, 1987], p. 236).

According to Fr Florovsky, ‘He was a well-known figure far beyond the borders of Palestine, and in 367 he was elected bishop of Constantia (Salamis) in Cyprus. There he became renowned as an ascetic, thaumaturge, and defender of orthodoxy’ (p. 236). This last activity dominates the latter part of St Epiphanius’s life. Fr Florovsky writes, ‘Epiphanius displayed a zealous interest in the detection and denunciation of heresy. He considered that the uncovering of false teachings was his main task and calling in life, and his chief compositions are dedicated to the dissection of heretical doctrines’ (pp. 236-7). The author of my second favourite patristic homily, St Epiphanius is also one of the few hierarchs to be featured in the Gerontikon. Here are a few of the sayings associated with him:

3. The blessed Epiphanius, Bishop of Cyprus, was told this by the abbot of a monastery which he had in Palestine, ‘By your prayers we do not neglect our appointed round of psalmody, but we are very careful to recite Terce, Sext and None.’ Then Epiphanius corrected them with the following comment, ‘It is clear that you do not trouble about the other hours of the day, if you cease from prayer. The true monk should have prayer and psalmody continually in his heart.

4. One day St Epiphanius sent someone to Abba Hilarion with this request, ‘Come, and let us see one another before we depart from the body.’ When he came, they rejoiced in each other’s company. During their meal, they were brought a fowl; Epiphanius took it and gave it to Hilarion. Then the old man said to him, ‘Forgive me, but since I received the habit I have not eaten meat that has been killed.’ Then the bishop answered, ‘Since I took the habit, I have not allowed anyone to go to sleep with a complaint against me and I have not gone to rest with a complaint against anyone.’ The old man replied, ‘Forgive me, your way of life is better than mine.’ (Ward, p. 57)

8. He also said, ‘The acquisition of Christian books is necessary for those who can use them. For the mere sight of these books renders us less inclined to sin, and incites us to believe more firmly in righteousness.’

9. He also said, ‘Reading the Scriptures is a great safeguard against sin.’

10. He also said, ‘It is a great treachery to salvation to know nothing of the divine law.’

Here is the lovely ‘Hymn of Praise’ for St Epiphanius in the Prologue:

Epiphanius, follower of Christ
By bread is fed and water drinks,
By the power of Christ, miracles he performs,
As a thunderer, heresies he destroys,
Soldier of Truth, pillar of Orthodoxy.
At death, such a testament, he leaves:
Vile thirst for money, you extinguish,
The rich man, do not ever envy,
Do not hate and do not slander,
And every heresy you avoid,
All foul thoughts, as serpents, drive away
They, from believers, make unbelievers.
A sober mind you keep, tied to God,
Booty of the devil, a sober man is not.
For me a sinner, you pray to God,
With your whole life, glorify God!

Update: Be sure to check out Biblicalia for Kevin Edgecomb's wonderful and very helpful post on the newest edition of an English translation of Book I St Epiphanius's Panarion. Also, one can find a translation of St Epiphanius's treatise on biblical 'Weights & Measures'—in which, as Fr Florovsky tells us, he 'discusses the canon of the Old Testament, its various translations, the geography of Palestine, and deals with "measures and weights" in passing' (p. 238)—here, at Roger Pearse's marvellous site.
Posted by Aaron Taylor at 10:34 AM

A few months ago I posted on a new edition of the only full translation of St Epiphanius' Panarion. This new edition is of book one. I don't know whether books two and three are going to be revised. The Panarion is great fun to read. It provides numerous quotes from otherwise lost gnostic documents, and a host of fascinating stories. St Epiphanius shoots from the hip. His righteous indignation at the effrontery of the heretics comes through loud and clear, an indignation we really should share.

An interesting sidebar to talk of St Epiphanius' Panarion is the use of an epitome of the Panarion by St John Damascene in his Fountain of Knowledge, in the second book, On Heresies. The first eighty are directly from this Panarion epitome, while the last 23 were composed by St John himself, including a chapter on Islam (which I've translated here), which had not yet established itself as a separate religion.

Thanks, Kevin! I'll have to update to link to your post on this translation. I'd forgotten about St John's use of the Panarion, but I've been planning to do a post with part of his chapter on Islam ever since the Muslim books post. I'll be sure to link to your translation when I do.

A question, since you seem to be somewhat of a wellspring of these things. You wouldn't happen to know any troparia, hymns or prayers associated with St. Peter the Apostle's release from Prison or the Righteous Judith (OT saint)? My mother made a request a bit ago, and I'm quite chagrined as I cannot find something for either. As one not qualified to compose a substitute, I was hoping you might know of some texts, or where I could find them.