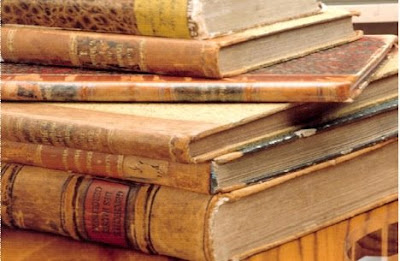 I have been blessed with a good couple of weeks, bibliophilically speaking that is. First, through the kindness of a Cypriot friend who recently visited Athens, I have finally acquired the hard-to-find, out-of-print volume 2 of the edition of the Philokalia published in Greek by Astir (with whom readers may be familiar as a publisher of Kontoglou and Cavarnos), thus completing the entire 5-volume set. There is an edition currently in print by the Thessaloniki publisher, Το Περιβόλι της Παναγίας (The Garden of the Panagia), but translated into Modern Greek. The Astir edition is in the original language, besides featuring beautiful line drawings of each of the authors by Kontoglou’s student, Rallis Kopsidis. I am very pleased to have all five at last!

My second, nearly as exquisite acquisition is the Hexaemeron of St Anastasius of Sinai. I’m not certain how many readers of Logismoi will have noticed, but I received some comments on my post for St Anastasius concerning the 2007 text and translation of the Hexaemeron published as part of the Orientalia Christiana Analecta (Anastasius of Sinai, Hexaemeron, ed. and trans. Clement A. Kuehn and John D. Baggarly, SJ, Orientalia Christiana Analecta 278 [Rome: Pontifical Oriental Institute, 2007]). My commentor first kindly pointed out the availability of the edition at a healthy discount from Amazon.com, but when I replied that even with the discount it was still too expensive for me he asked for my shipping address, and informed me by e-mail that he had decided to send me the book as a gift! Here is this kind gentleman’s explanation of what made him decide to do this:

Your comment somehow alerted my conscience to the fact that I who am single with no dependents and very little mandatory expenses had just ordered this book for myself, along with many others, and I realized I was in the position to offer something from my means, to you who have, as I have gathered, a wife and little ones depending on you and so less money perhaps to play around with.

I consider all of the insights and recommendations I've received from your blogging efforts, which have been so far gratis, and a labor of love on your part to be a more than an equal trade, so to speak. Besides, money is for spending, as St John Chrysostom notes somewhere in his homilies on St John's gospel (but I guess we Americans better be careful with that one!)

Needless to say, I was positively moved to tears by this! In return, I have promised to pray that the Mother of God guides my benefactor in discerning a calling to the monastic life.

A hefty volume with a grey paper cover bespeaking serious scholarship, the book features a foreword by Joseph Munitiz, SJ, an introduction dealing with author, date, manuscript history, and printed editions, a select bibliography, and an index of names. The Greek text is footnoted with variant MS readings, while the translation is footnoted with Scriptural citations and allusions. On the right margin of the Greek text is the location of the corresponding passage in Migne, while on the left is the line number of the OCA edition, beginning again with each ‘book’ of the text.

Last but not least, I have just purchased six used books from the newly opened Oklahoma City store of Half-Price Books, all at 20%-off of already wonderful prices. The books are as follows:

1) Montague Summers, The History of Witchcraft (London: Senate, 1994). A paperback reprint of a 1926 study, by the purported Catholic cleric and erudite expert on vampires.

2) Alasdair MacIntyre, After Virtue, 2nd ed. (Notre Dame, IN: U of Notre Dame, 1984). A modern classic of moral philosophy, I’ve been meaning to acquire a copy of this ever since I read the first two chapters, ‘A Disquieting Suggestion’ and ‘The Nature of Moral Disagreement Today and the Claims of Emotivism’, at the house of a professor of philosophy at the American College of Thessaloniki in 2003.

3) Robert Irwin, ed., Night & Horse & the Desert: An Anthology of Classical Arabic Literature (NY: Anchor, 2001). An anthology covering the fifth to the sixteenth centuries, this was admittedly kind of an impulse buy. My visit to the Turkish cultural centre got me in an ‘Oriental’ mood, and then the description on the back won me over. Try this out:

In Night & Horse & the Desert we encounter the dashing Byronic poetry of Imru’ al-Qays and a treatise on bibliomania by Al-Jahiz, possibly the only writer to have been killed by books. There’s a sorcerer’s manual from eleventh-century Spain and an allegory by the mysterious ‘Brethren of Purity’, in which animals argue their case against humanity. Encompassing piety and profanity, fables and philosophy, this volume is a thrilling and invaluable introduction to one of the world’s great bodies of literature.

5) Francis Spufford, ed., The Vintage Book of the Devil (London: Vintage, 1997). An anthology of excerpts about the devil from classic works of literature, Church Fathers, poets, apocryphal texts, and novelists, this one features a fascinating and witty introduction by the Prince of Darkness himself (or maybe it’s just Spufford).

6) Martin Biddle, The Tomb of Christ (Thrupp, UK: Sutton, 1999). A glossy, coffee table-type book featuring lots of great photographs and a scholarly yet readable study of the Holy Sepulchre by an Oxford archaeologist, focusing mostly on the Edicule (κουβούκλιον) and the Tomb itself. According to the dust jacket, among other things Biddle ‘shows how a tomb found in AD 325/6 under a Roman temple in Jerusalem has a good claim to be the tomb in which the body of Christ was laid on the evening of the crucifixion in AD 30 or 33’.

I’m seriously thinking about posting short excerpts from all of these books (well, except the Philokalia) in the next few days!
Posted by Aaron Taylor at 11:58 PM

Please do Aaron: please do. The book on the devil sounds particularly intriguing -- if that makes sense and doesn't seem odd.

And thanks be to God for the kind gentleman who, in love an humility, sent you the book.

I received Hexaemeron by St. Anastasius today from Amazon and already started reading it.
What a delight! Really enjoy the book.

Couldn't have happened to a more deserving guy (really...) Thank God the books went to someone who will cherish them for their true worth and not an antiquarian bookseller. Of course I'm envious. :)

Aw shucks, Steven! I am sorry to cause temptation, but I felt this kind deed could not go unmentioned...