'It Is the Eve of St George's Day' 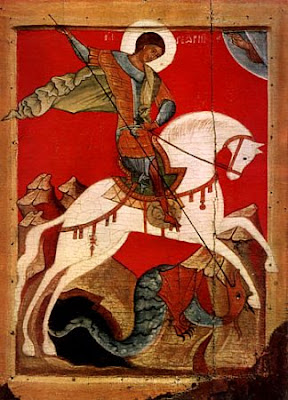 When Jonathan Harker is about to leave the Golden Krone Hotel in ‘Bistritz’ (Bistriţa) to take the diligence to the Borgo Pass, where Dracula’s carriage is scheduled to meet him, he relates that the following exchange takes place (Bram Stoker, The Annotated Dracula, ed. Leonard Wolf [NY: Clarkson N. Potter, 1975], p. 7):

Just before I was leaving the old lady came up to my room and said in a very hysterical way:

‘Must you go? Oh! young Herr, must you go!’ . . . When I told her that I must go at once, and that I was engaged on important business, she asked again:

‘Do you know what day it is?’ I answered that it was the fourth of May. She shook her head as she said again:

‘Oh yes! I know that, I know that! but do you know what day it is?’ On my saying that I did not understand, she went on:

‘It is the eve of St George’s Day. Do you not know that to-night, when the clock strikes midnight, all the evil things in the world will have full sway? Do you know where you are going, and what you are going to?’

In his note on this statement (p. 7-8, n. 27), Leonard Wolf excerpts a sceptical account of the ‘legend’ of St George, concluding: ‘In this tale, as in other Christian dragon tales, the dragon represents Satan. And he does in Stoker’s fiction, as well, if we remember that Dracul in Romanian means both “dragon” and “devil”.’ Wolf then points us toward the excellent account of the background of the landlady’s concern in Montague Summers’s intriguing The Vampire in Europe (NY: Gramercy, 1996), pp. 311-2. There we read (I quote slightly more than Wolf):

Throughout the whole of Eastern Europe, indeed, the feast of S. George, 23 April, is one of the most important celebrations of the whole year and it has become the occasion of numberless observances and rites which can barely be glanced at here. . . . S. George, ‘le très-loyal Chevalier de la Chrétienneté’, has always been honoured in the East as ‘The Great Martyr’, and one of the first churches erected by Constantine, after his profession of Christianity, was in honour of this saint. He is the especial patron of cattle, horses and wolves, and it may not untruly be said that among the herdsmen and shepherds of Eastern Europe the feast of S. George, who will protect their flocks from the ravages of wild beasts has a national, one might almost write an international as well as an ecclesiastical character. At the same time upon the eve of the saint the power of vampires, witches and every evil thing is at its height. Among the Ruthenians of Bukowina and Galicia the farmer’s wife gathers great branches of thorn to lay on the threshold of her house and every door is painted with a cross in tar to protect it from the witches. The Huzuls kindle large bonfires for their houses for the same reason whilst throughout Transylvania, Walachia and Bulgaria precautions of various kinds are similarly taken. The South Slavs favour bundles of thistles which are placed on the fence, the windows and the doors to prevent the entry of any evil thing. On the morrow, 23 April, the house is garlanded with flowers, chaplets of roses decorate the stalls and the horns of the cows are wreathed with blossom in honour of the saint. Until quite recent years in Swabia all the church bells used to be kept ringing a merry chime from nightfall until dawn on the day of the festival. This no doubt was often taken to be merely the due ushering in of the celebrations, but originally it had a further signification, for in those parts it was believed that no vampire and no witch can come within the sound of a church bell. Although unfortunately, in many cases as in England, owing to the blameworthy coldness and neglect of the authorities, the cultus of S. George cannot be said to be flourishing or popular, yet in some places the saint is still particularly honoured and it is sad to think that the solemn celebrations which attracted pilgrims from far and near to Ostrotta in Poland and Ertringen in Bavaria have lost much of their popularity.

It is curious that Wolf fails to notice the discrepancy between Harker’s reply concerning the day (not to mention the date of his journal entry) on the one hand, and the date of St George’s feast mentioned by Summers (and which Wolf includes in his excerpt) on the other. The reason for the discrepancy is, of course, that the Romanians at the time of Harker’s trip (Wolf suggests the year 1887 to account for the moon phases as given by Stoker [p. 343]) were still following the Church’s calendar for fixed feast days. In 1887, 23 April on the Church’s calendar would fall 12 days after the same date on the Gregorian calendar: i.e., 4 May.
Posted by Aaron Taylor at 10:23 PM