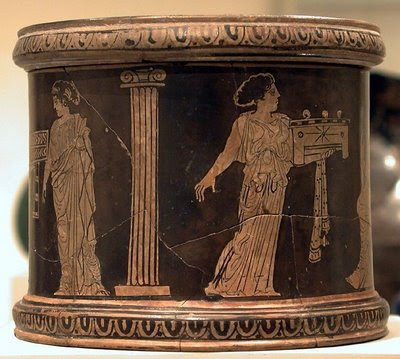 Coming hot on the heels of my reading of a number of sympathetic accounts of ancient ethics—in which, of course, the idea of εὐδαιμονία, ‘happiness’ or ‘blessedness’, is often paramount—I was at one point a few years ago confronted with a use of the word eudaimonia by some Orthodox that was almost wholly negative, as though it was a touchstone of heresy and the errors of Greek philosophy. It seemed to me that this use was a result of taking Fr John Romanides’s—I believe—specific use of the term as normative. For instance, in ‘Highlights of the Debate Over Theodore of Mopsuestia’s Christology’ (here), he writes:

It seems clear enough that underlying Theodore's thought is a moralism in this life topped by a Platonic type of eudaimonia in the next. Such a concept of human destiny lacks any real understanding of the Biblical doctrine of creation and freedom and logically leads to eschatological determinism . . . .

Notice that Fr Romanides qualifies the word with ‘a Platonic type of’, and then links it specifically with ‘determinism’. In the next paragraph, he speaks of the belief in ‘immutability and happiness in the next’ life, thus linking these two things. While I do not claim fully to understand Fr Romanides’s use of the term, it seems to me from these passages that per se it is not eudaimonia that is the problem, but perhaps eudaimonia conceived as an immutable state. I would grant that this seems to be the Platonic conception, and that it contrasts with the Orthodox idea of continued progress in the next life, most familiarly articulated by St Gregory of Nyssa. But Constantine Cavarnos, for one, has spoken favourably of the rôle of ‘happiness’ in Greek ethics. Concerning Demosthenes, he writes, ‘His ethical teachings represent the moral wisdom of the ancient Greek people of his time, who did not espouse that [materialistic] theory. In their main trend, they are a part of the ethical wisdom that guided the Greek people of his time in their aspiration for true happiness’ (Orthodoxy and Philosophy [Belmont, MA: Institute for Byzantine & Modern Greek Studies, 2003], pp. 153-4).

All of this got me thinking. Eudaimonia is usually translated ‘happiness’, and while I have not come across too many uses of the word in the Greek Fathers, one does often find another word that is also occasionally translated as ‘happiness’: μακαρία or μακαριότης. This is of course a profoundly biblical term, most well known in adjectival form from the Beatitudes (or Μακάριοι) of our Lord’s Sermon on the Mount (Matt. 5:3-10). The same adjective is also the first word of the the Psalter in the Septuagint. St Gregory of Nyssa, in his treatise ‘On the Inscriptions of the Psalms’, writes, ‘The goal of a life in accord with virtue is happiness [μακαριότης]’ (Commentary on the Inscriptions of the Psalms, trans. Casimir McCambley, OCSO [Brookline, MA: Hellenic College, n.d.], p. 23).

8. Concerning virtue in relation to eudaimonia.

9. Concerning virtue in relation to makarioteta.

Aristotle has written the following concerning eudaimonia and makariotetos: [he then quotes with approval the above passage from Aristotle].

Concerning eudaimonia see Aristotle, Nicomachean Ethics X, 6-8. Aristotle says eudaimonia in a perfect life is an activity of the soul in accordance with virtue.

The Stoics said that outward things do not hinder eudaimonia, even if the Bull of Phalaris [of Sicily] has burned the happy [makarios] man of real consequence [sorry about my translation here, I found the passage confusing!] (according to St Gregory the Theologian, Letter 72 to Philagrius). (pp. 98-99)

While I'm sure that St Nektarios is not speaking of some heretical, 'immutable' eudaimonia, such as that which Fr Romanides finds objectionable, I have the feeling that those who are accustomed to using the word in the Romanidean sense would be somewhat shocked by this passage in the Saint's writings. To me it is a reminder that we ought to be careful about how we use terms in theology, making sure of the different ways they are employed and qualifying our uses of them accordingly.
(The image above is a representation of Eudaimonia on a Greek vase of 420-410 BC, at the Metropolitan Museum of Art in NY. HT to Ecce Ars, where the image was included in a short post on eudaimonia in Portugese.>
Posted by Aaron Taylor at 12:00 AM

The Stoics said that outward things do not hinder eudaimonia, but the Bull of Phalaris has burned ven the important, happy man."That's perfectly clear as you've translated it. The burned man in the bull cannot be called happy anymore, nor can his eudaimonia be said to have remained intact, solely due to the fact of having been so tortured. In short, the Stoics were wrong, the Saint is saying.

Thanks! I'm glad it made sense to someone, if not to me!

So, I showed the Greek text of this passage from St Nektarios to a Cypriot friend of mine, and he drew the conclusion opposite to yours, thereby calling my translation into question! According to him, the second part of the sentence is really just an illustration of the first part, and re-reading it, I think I can see where my translation has gone wrong. I shall alter it accordingly, so let me know what you think now.