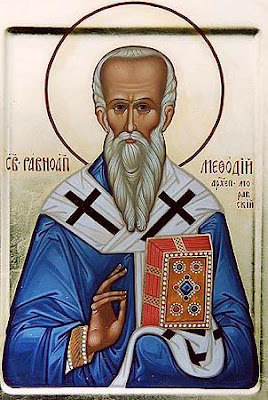 It seems a great deal more has been said here about St Cyril than about his brother St Methodius. I have already mentioned an older post containing two stanzas of a canon likely written by the latter, the leader of the mission to Moravia who, according to the Life of St Naum, ‘organized everything there well and . . . taught’ (Thomas Butler, trans., Monumenta Bulgarica: A Bilingual Anthology of Bulgarian Texts from the 9th to the 19th Centuries [Ann Arbor, MI: Michigan Slavic, 2004], p. 105), and who likely endured more physical suffering on behalf of the mission than his brother.

But while I can’t vouch for its historicity, there is a fascinating passage in the entry on St Methodius in Milorad Pavić’s Dictionary of the Khazars: A Lexicon Novel, male ed., trans. Christina Pribićević-Zorić (NY: Vintage, 1989), pp. 88-9:

When he returned to Moravia in the summer of 870 AD, Methodius was imprisoned by the German bishops and locked up for two years, during which he could hear nothing but the sound of the Danube. He was brought to trial before a synod in Regensburg, then tortured and exposed naked to the frost. While they whipped him, his body bent over so low that his beard touched the snow, Methodius thought of how Homer and the holy prophet Elijah had been contemporaries, how Homer’s poetic state had been larger than the state of Alexander of Macedonia, because it had stretched from Pontus to beyond Gibraltar. He thought of how Homer could not have known all that moved through and was to be found in the seas and cities of his state, just as Alexander the Great could not have known all that was to be found in his own state. He also thought of how Homer had at some point written into his work the name of Sidon and with it, unknowingly, that of the prophet Elijah, fed by birds according to God’s will. He thought of how Homer had had seas and towns in his vast poetic state, not knowing that in one of them, in Sidon, sat the prophet Elijah, who was to become an inhabitant of another poetic state, one as vast, eternal, and powerful as Homer’s own—an inhabitant of the Holy Scriptures. And finally he wondered whether the two contemporaries had ever met, Homer and St Elijah, the settler of Galaad—both immortal, both armed only with words, one blind and gazing at the past, the other clairvoyant and obsessed with the future, one a Greek who sang of water and fire better than any poet, the other a Jew who rewarded with water and punished with fire, using his cloak as a bridge. There is a tight pass on earth—thought Methodius finally—one no wider than ten camel deaths, where two men missed each other. This space between their strides is narrower than any gorge in the world. Never had two greater things been so near each other. Or are we mistaken, like all those whose sight serves the memory rather than the ground beneath us? . . .

Hecuba went down to a storeroom filled with scent
and there they were, brocaded, beautiful robes . . .
the work of Sidonian women. Magnificent Paris
brought those women back himself from Sidon,
sailing the open seas on the same long voyage
he swept Helen off, her famous Father’s child.

Thank you for your nice comment about my akathist to Saint Brendan written in the barbarous French language. I am a member of the ROCOR, I have written several akathist to Celtic saints, and I wonder why the smart English, Irish and Americans did not think of writing an akathist to St. Brendan in their own divine dialect.
In Christ,

I think perhaps you meant to comment on the St Brendan post rather than this one. But at any rate, I truly hope you didn't take that tongue-in-cheek comment about French seriously. I do not for a moment believe there is anything barbarous about the French language. To tell the truth, more than anything else I'm embarrassed that I don't read it! You are right, though, that it is a shame that no one has written an Akathist to St Brendan in English or Irish, and if I did know French I myself would love to translate yours. Thank you for your veneration of and labours on behalf of this wonderful Saint!