'The Virgin Hermitess of Wales'—St Melangell 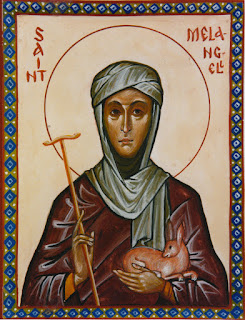 According to the Holy Trinity (Baltimore) calendar, today, 30 May on the Church’s calendar, is the feast day of St Melangell ('Monacella', † c. 641), virgin hermitess of Wales. Although the other sources I’ve found online indicate her feast as 27 May, I shall go ahead and post on her today since I didn’t notice this discrepancy until it was too late, and I didn’t want to miss posting on her entirely.


One can find brief overviews of St Melangell’s life here and here, but as short as the actual Vita is, and as little material as I’ve been able to find about her online, I’m afraid I shall simply have to post the thing in full:

In Powys there was once a certain most illustrious prince by the name of Brychwel Ysgithrog, who was the Earl of Chester and who at that time lived in the town of Pengwern Powys, which means in Latin the head of Powys marsh and is now known as Salop, and whose home or abode stood in that place where the college of St Chad is now situated. Now that very same noble prince gave his aforesaid home or mansion for the use of God as an act of almsgiving both by his own free well and from a sense of religious duty, making a perpetual grant of it for his own sake and for the sake of his heirs. When one day in the year of our Lord 604, the said prince had gone hunting to a certain placei n Britain called Pennant, in the said principality of Powys, and when the hunting dogs of the same prince had started a hare, the dogs pursued the hare and he too gave chase until he came to a certain thicket of brambles, which was large and full of thorns. In this thicket he found a girl of beautiful appearance who, given up to divine contemplation, was praying with the greatest devotion, with the said hare lying boldly and fearlessly under the hem or fold of her garments, its face toward the dogs.

Then the prince cried ‘Get it, hounds, get it!’ but the more he shouted, urging them on, the further the dogs retreated and, howling, fled from the little animal. Finally, the prince, altogether astonished, asked the girl how long she had lived on her own on his lands, in such a lonely spot. In reply the girl said that she had not seen a human face for these fifteen years. Then he asked who the girl was, her place of birth and origins, and in all humility she replied that she was the youngest daughter of King Jowchel of Ireland and that ‘because my father had intended me to be the wife of a certain great and generous Irishman, I fled from my native soil and with God leading me came here in order that I might serve God and the immaculate Virgin with my heart and pure body until my dying day.’ Then the prince asked the girl her name. She replied that her name was Melangell. Then the prince, considering in his innermost heart the flourishing though solitary state of the girl, said: ‘O most worthy virgin Melangell, I find that you are a handmaid of the true God and a most sincere follower of Christ. Therefore, because it has pleased the highest and all-powerful God to give refuge, for your merits, to this little wild hare with safe conduct and proteciton from the attack and pursuit of these savage and violent dogs, I give and present to you most willingly these my lands for the service of God, that they may be a perpetual asylum, refuge, and defense, in honor of your name, excellent girl. Let neither king nor prince seek to be so rash or bold toward God that they presume to drag away any man or woman who has escaped here, desiring to enjoy protection in these your lands, as long as they in no way contaminate or pollute your sanctuary or asylum. But, on the other hand, if any wrongdoer who enjoys the protection of your sanctuary shall set out in any direction to do harm, then the independent abbots of your sanctuary, who alone know of their crimes, shall, if they find them in that place, ensure that he culprits be released and handed over to the Powys authorities in order to be punished.’

The virgin Melangell, who was so very pleasing to God, led her solitary life, as stated above, for thirty-seven years in this very same place. And the hares, which are little wild creatures, surrounded her every day of her life just as if they had been tame of domesticated animals. Nor, by the aid of divine mercy, were miracles and various other signs lacking for those who called upon her help and the grace of her favor with an inner motion of the heart.

After the death of the said most illustrious prince Brochwel, his son Tyssilio held the principality of Powys, followed by Conan, the brother of Tyssilio, Tambryd, Gurmylk, and Durres the lame, all of whom sanctioned the said place of Pennant Melangell to be a perpetual sanctuary, refuge, or safe haven for the oppressed (thereby confirming the acts of the said prince). The same virgin Melangell applied herself to establish and instruct certain virgins with all concern and care in the same region in order that they might preserve and live in a holy and modest manner in the love of God, and should dedicate their lives to divine duties, doing nothing else by day or by night. After this, as soon as Melangell herself had departed this life, a certain man called Elissa came to Pennant Melangell and wishing to debauch, violate, and dishonor the same virgins, suddenly perished and died there in the most pitiful manner. Whoever has violated the above-mentioned liberty and sanctity of the said virgin has been rarely seen to escape divine vengeance on this account, as may be seen every day. Praises be to the most high God and to Melangell, his virgin. (Davies, pp. 221-3)


Now when this story is recounted, as it infrequently is, in our day, the tenderness of the Saint towards the hare is typically emphasised, usually as an illustration of some sort of ‘Celtic ecology’. Christopher Bamford, for instance, tries to claim that ‘everywhere in Celtic Ireland we will find a holy intimacy of human, natural and divine’ (‘Ecology and holiness: The heritage of Celtic Christianity’, Celtic Christianity: Ecology and Holiness, ed. William Parker Marsh and Christopher Bamford [West Stockbridge, MA: Lindisfarne, 1987], p. 19).

Fortunately, there are voices of reason to be found, though they are more obscure. Thomas Owen Clancy and Gilbert Márkus advocate allowing the Celtic monks ‘to speak to us in their own voices, rather than simply projecting our needs on to them’ (Iona: The Earliest Poetry of a Celtic Monastery [Edinburgh: Edinburgh U, 1995], p. 89). Thus they point out, ‘Donnchadh Ó Corráin has shown that the modern image of nature-loving hermits dwelling quietly and peacefully in intimacy with their surroundings is constructed largely on the basis of only fourteen poems written between the ninth and eleventh centuries’, poems, furthermore, written not by hermits but by ‘urban nature-lovers’ (p. 90). The ‘view of nature’ more commonly reflected in the Celtic sources they find to be ‘ambivalent’—where the natural environment of the monks is often a threatening force or even a specific instrument of ascetic suffering (pp. 90-1).

St Melangell is an excellent example of this phenomenon. One site, to which I won’t link, actually goes to far as to suggest that the whole story was essentially made up in order to provide a convenient justification for pagan veneration of the ‘sacred hare’, with the prince representing, in the mind of the modern author, the cruel Romanised, European man committing acts of violence against peaceful animals, and the female Celtic hippy-type protecting the sanctity of nature against him. But when we read the story, we notice that St Melangell does not do or say anything to protect the hare, and in fact seems to take no notice of it. It is the prince who notes how the hare seems to be protected by her presence, and furthermore he reveres the area as sacred not because of anything St Melangell has done or said but ‘because it has pleased the highest and all-powerful God to give refuge, for your merits, to this little wild hare with safe conduct and protection’ (Davies, p. 222).

Furthermore, remember that St Melangell was found ‘praying with the greatest devotion’ in the middle of ‘a certain thicket of brambles, which was large and full of thorns’ (p. 221). This specifically recalls one of the ‘“negative” aspects of nature’ that Clancy and Márkus find in Celtic monastic writings (p. 91). They cite, for example, the Buile Suibne, where we read ‘a shower of thorns off the hawthorn would stick into him, so that they were piercing and rending his side and wounding his skin’, and later:

Grey branches have wounded me,
they have torn my hands;
the briars have not left
the making of a girdle for my feet. (p. 91)


The Life of St Melangell is not an anti-hunting tract (for more on hunting, see this wonderful article by Charles Coulombe), but a story of God’s manifestation of the holiness of one of His Saints. He simply uses the hare, just as He uses the thicket of thorns and the piety of the prince, to perform this manifestation.

Thus, the shrine of St Melangell in Pennant Melangell, Llangynog, Powys, North Wales, is even to this day a place of pilgrimage, and in her honour the hunters of Cwm Pennant never shoot the local hares. For, according to the church registers of 1723 (qtd. here)—

Melangell with a thousand angels
Triumphs over all the powers of evil.


Here is a Troparion for St Melangell in Tone 8, taken hence:

Preferring the rigours of monasticism to worldly
status and marriage, O pious Melangell,
though wast fifteen years on a rock,
emulating the example of the Syrian Stylites.
Wherefore, O Saint, pray to God that He will give
us strength to serve Him as He wills,
that we may be found worthy of His great mercy.

Thorns as an emblem of nature pitted against mankind...I can't help but thinking of Genesis 3:18. Not to mention the crown of thorns on Christ's brow.

God has gone up with a shout!